Acer’s lineup of gaming laptops has been given a hardware update including a few accessories.

Acer has brought its latest lineup of gaming laptops, eight to be precise, to India with upgraded hardware. This includes the powerful and premium Predator Triton 900 down to the entry-level Nitro 5. Most of the laptops are now powered by the latest 9th Generation Intel Core processors and Nvidia GeForce RTX graphics cards.

Apart from the gaming laptops, Acer also announced a few other gaming products including the Nitro Stream streaming PC and three gaming monitors. The prices of the gaming laptops range from Rs 59,999 all the way up to Rs 4,49,999. The Predator Triton 900 is a top of the line gaming laptop in Acer’s portfolio. It features a 17.3-inch 4K IPS touchscreen display that can be flipped 180-degrees. Essentially, the display can also be used as a tablet in the flipped mode. The Ezel Aero Hinge should make for a sturdy mechanism to flip the display so that it doesn’t wobble while in use in the tablet mode.

In terms of hardware, it comes with a 9th Gen Intel Core i9 processor and Nvidia GeForce RTX 2080 graphics card. There are two 512 GB M.2 PCIe NVMe SSDs installed in Raid 0 with up to 32 GB of RAM. It also comes with a low-profile mechanical keyboard that supports per-key RGB backlighting. The Triton 900 could be priced at Rs 4,49,999 for the top-end model.

The Triton 500 has a 15.6-inch full HD display with a refresh rate of 144 Hz and support for Nvidia G-Sync technology. It’s powered by an older 8th Gen Intel Core i7 processor for some reason. However, in the graphics department, it’s running an RTX 2080 with the Max-Q design. While the Triton 900 has a large chassis, the Triton 500 has a compact body that makes it more portable, boasting up to eight hours of battery life. It’s price starts at Rs 1,65,999.

Apart from running on a 9th Gen Intel Core i9 overclockable processor and up to an Nvidia GeForce RTX 2080 with up to 64 GB of RAM, it comes with Killer Wi-Fi 7 AX 1650 and E3000 adaptors. There’s a 17-inch 144 Hz full HD IPS display that comes with Nvidia G-Sync technology. Five speakers and a subwoofer are also present within the chassis of the laptop.

To enhance cooling in the laptop, it comes with a unique keyboard design called HyperDrift. The keyboard’s design slides out to enable better airflow on the top where the fans are placed. There are two additional air intake fans that power up whenever the keyboard is slid out. The Helios 700 starts at Rs 2,49,999. 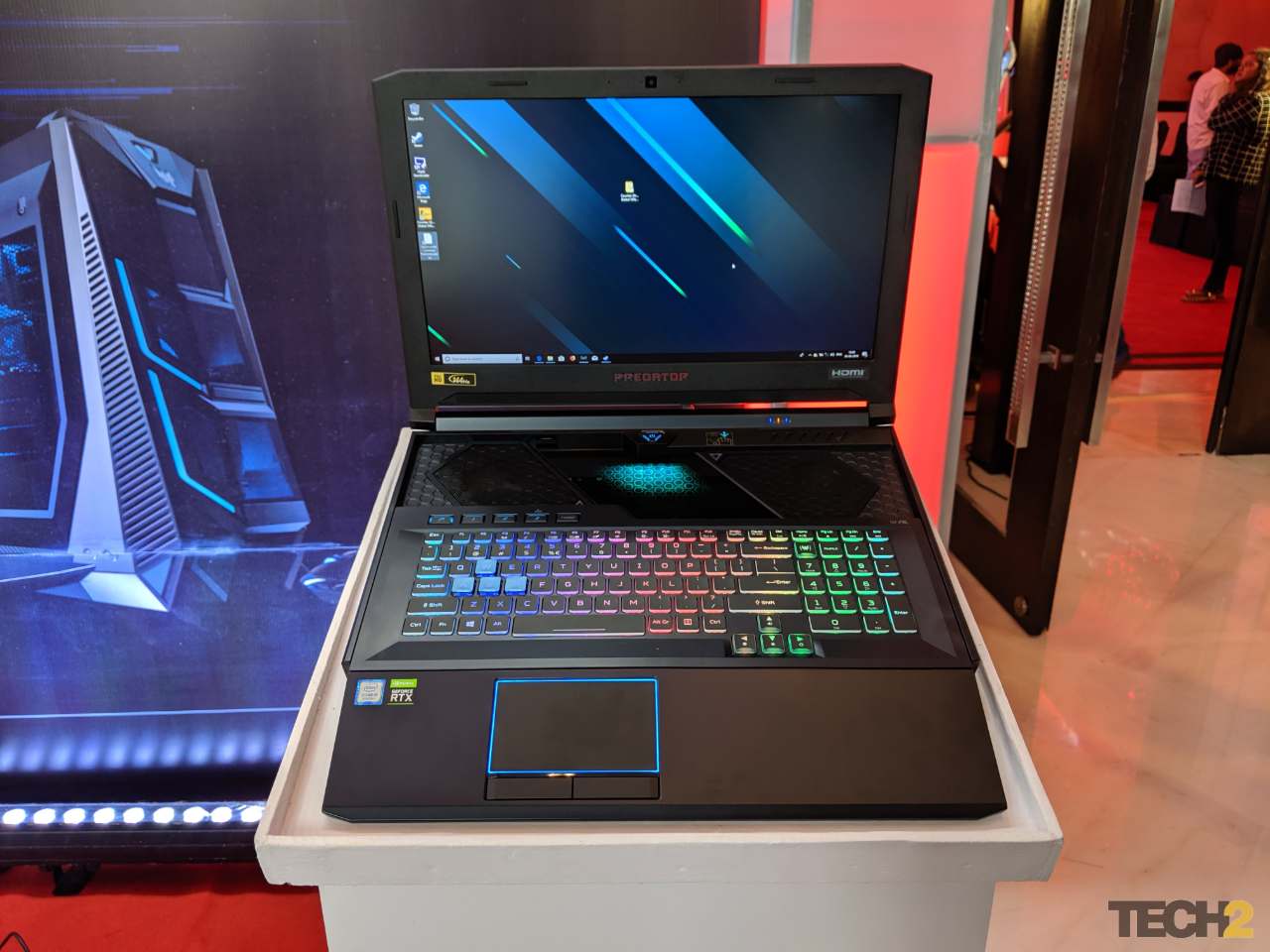 The HyperDrift keyboard on the Acer Predator Helios 700 can slide out to enable better cooling.

The Helios 300 comes in two screen size options including 15 and 17-inch with a Full HD IPS display sporting a 144 Hz refresh rate. It runs on a 9th Gen Intel Core i7 processor with an Nvidia GeForce RTX 2070 graphics card with Max-Q design. There’s also two PCIe NVMe SSDs in Raid 0 with an additional hard drive and up to 32 GB of RAM. The 15-inch model starts selling at Rs 99,999 whereas the 17-inch model starts at Rs 1,14,999.

The Nitro series of gaming laptops from Acer is directed towards casual gamers who aren’t really looking at playing graphic-intensive games. Although the company didn’t reveal what processor and graphics card it was running, all that was mentioned was it runs on a “Next-Gen Intel Core processor and the latest Nvidia GeForce Graphics”. That should be indicative of the Nitro 7 running a 9th Gen Intel Core processor and an Nvidia GTX 16 series card considering the starting price of Rs 84,999.

The entry-level gaming laptop in Acer’s lineup is the Nitro 5 that’s powered by a 9th Gen Intel Core processor and an Nvidia GTX graphics card. Both the Nitro gaming laptops have up to two M.2 PCIe NVMe SSD slots running in Raid 0 with up to 32 GB of RAM. They pack Killer Ethernet E25002 along with Gigabit Wi-Fi 5 or 802.11ac. The Nitro 5 comes in a 15-inch display variant and starts selling at Rs only 59,999.

The company also launched a few more gaming products including a dedicated streaming PC called the Nitro Stream. It can be directly plugged into a PC to take care of the streaming workload. Powered by an 8th Gen Intel Core i7 or i5 processor, it comes with up to 32 GB of RAM, 256 GB of SSD storage and an integrated capture card capable of delivering 4K footage at 60 frames per second while streaming at 1080p. It will be available from mid-September and the price hasn’t been announced yet.

All the above-mentioned are already available for sale (except the Nitro Stream) on the Acer E-store website and Acer Malls.

Acer Predator Triton 900 is a $4,000 gaming convertible which just launched at CES