Toyota Rush SUV revealed through leaked images ahead of it launch

The Toyota Rush looks like a production version of the Daihatsu FT Concept showcased in 2015. 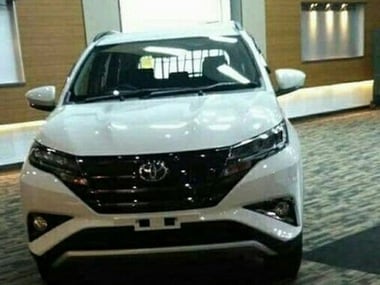 The Toyota Rush SUV will also be followed by the reveal of the Daihatsu Terios SUV which should have very similar styling and features, being a badge-engineered sibling of the Rush. The 2018 Toyota Rush will come fitted with LED head lamps and tail lamps, electronic retractable mirrors with LED turn indicators, 16-inch alloy wheels, shark-fin antenna, and a rear spoiler.

The Toyota Rush is a popular seven-seater SUV sold in markets including Indonesia and other South-East Asian countries. As for the interior, the Toyota Rush features a 360-degree reversing camera, smart-entry system, a 7-inch touchscreen infotainment system and AC as standard on the base G variant. There will also be a Toyota Racing Development (TRD) Sport version sporting 17-inch alloys and some cosmetic changes later. The TRD Sport version will feature soft-touch plastics as well. Powering the Toyota Rush will be a newer dual VVT-i petrol engine, replacing the 1.5-litre four-cylinder unit on the current iteration of the SUV. However, other mechanical details will be revealed at the time of its launch.