The second 5,000 hp Devel Sixteen prototype debuts at the Dubai Motor Show; and no, that's not a typo

Just take a moment to think of the most powerful, the most awesome supercar on the planet that you can think of. Revel in the glory that is the car’s powertrain, the massive engine that probably pushes that car to speeds well in excess of 200 mph. Whether you’re thinking of a Ferrari, Lamborghini or even a Pagani, know that those cars are mere playthings in front of what we have for you here. 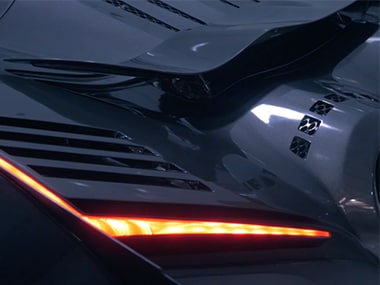 Meet the Devel Sixteen, an American-engined, Italian-designed hypercar that first debuted at the Dubai Motor Show in 2013. The original car was an early prototype that some dismissed as a flight of the imagination. At this year’s Dubai Motor Show, however, Devel unveiled the second, production-ready prototype of that monster.

Monster, that’s the perfect word to describe this beast of a vehicle. Why? Let’s put it this way, the toned-down, road legal version of the car, when it’s ready, is expected to churn out twice the power of 1,000 hp supercars like the Bugatti Veyron Super Sport and Koenigsegg Agera R. The more powerful road-legal version, and yes, it exists, churns out 3,000 hp.

The engineering miracles that led to such a car are beyond the realm of understanding of mere mortals like us. What we can tell you is that the “car”, if we can even use such a term for the Devel Sixteen, is powered by a quad-turbo 12.3 litre V16 engine that is eventually expected to hit 500 kph (around 310 mph). The “entry-level” 2,000 hp model and the more powerful 3,000 hp model will both come with a V8 engine. A teaser for the Devel Sixteen

The production-ready prototype is much more rounded and refined than the original. The massive rear spoiler is gone, replaced by a retractable one. Grooves have been added to the roof, and we suspect that these are for lateral stability when cruising along at speeds that would get a jetliner airborne. A massive front splitter helps with the downforce. The jet-engine style exhausts of the original have been replaced by cavernous cavities that you can probably stick your head into.

What anyone would do with that much power is beyond us, but one thing’s for sure, this car, if and when it finally enters production, will be the most ridiculous hypercar that has graced our roads yet.

Oh, and you get scissor doors.