Mercedes Benz states that the interior of the new-gen G-Class has got a complete revision.

Mercedes Benz has unveiled the all-new G-Class, an SUV that has always enjoyed a cult following among enthusiasts. The German automobile manufacturer will also be showcasing the new-gen G-Class in the upcoming Jurassic Park movie. The spied and the camouflaged images had already dropped hints of the new age SUV. Additionally, Mercedes-Benz had released an image of the interior and had also stated that the new G-Class will retail the low-range four-wheel-drivetrain with locking differentials. 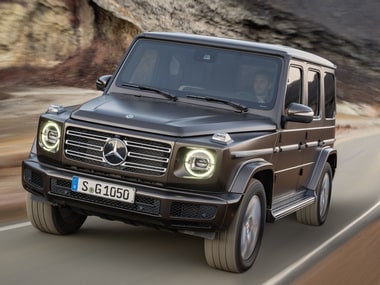 From the images it can be seen that the new-gen Mercedes Benz G-Class gets a new design but not substantially different from the previous model. In fact, there has been no substantial difference since the SUV's debut in 1979. In terms of dimensions, the new Mercedes Benz G-Class has got longer by 53 mm and also wider by 122 mm. Mercedes Benz states that the interior of the new-gen G-Class has got a complete revision. The instrument cluster in the new G-Class looks similar to that of the new E-Class and the S-Class. The company describes it by stating that the the two 12.3-inch displays blend visually into a widescreen cockpit beneath a shared glass cover where the drivers can choose between three different styles for the displays  Classic, Sport and Progressive. Being larger in dimensions, the cabin of the new-gen Mercedes Benz G-Class now offers more space, both in the front and the back. The rear seats can be folded down to 60, 40 or 100 percent. The SUV also comes equipped with massage functions, climate-controlled seats and fast seat heating. The new suspension in the new-gen G-Class is a from the collaboration between Mercedes-Benz G GmbH and Mercedes-AMG GmbH. The result is an independent suspension with double-wishbone front axle in combination with a rigid rear axle.

In terms of powertrain, the new Mercedes-Benz G-Class comes with a 4.0-litre V8 petrol engine that 422 PS and a maximum torque of 610 Nm at 2,000 to 4,750 rpm. The motor is mated to a 9G?TRONIC automatic transmission with torque converter was specifically adapted to meet the needs of the off-road icon, states the company.