The Land Rover New Discovery S comes with a 3.0-litre, Si6 petrol automatic engine with 6 cylinders. It has 8 speed transmission.

Tata Motors owned Jaguar Land Rover has launched a new SUV called the New Discovery in India. The seven-seater SUV comes in five variants that includes the Land Rover Discovery S, SE, HSE, HSE Luxury and the First Edition Land Rover. All the variants comes in both petrol and diesel engine options with prices starting from Rs 71.38 lakh in India. 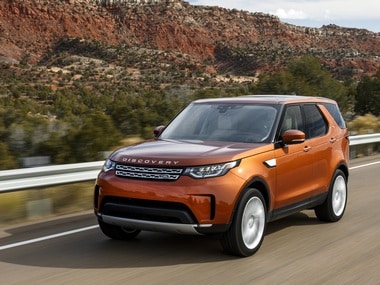 The Land Rover New Discovery S comes with a 3.0-litre, Si6 petrol automatic engine with 6 cylinders. It has 8 speed transmission that brings 250 kW of power and 450 Nm of Torque. The diesel engine features 3.0 -litre TD6 diesel paired with an automatic transmission that provides 600 Nm of torque and a 190 kW of raw power.

According to a report on Overdrive, the top petrol variant of the New Discovery First Edition provides 450 Nm torque and 250 kW of power whereas the diesel variant churns 190 kW and 600 Nm of power and torque respectively.

The Diesel variant of the First Edition New Discovery is priced at Rs 1.07 core whereas the petrol variant comes with a price tag of Rs 88.56 lakh. The petrol model has a highest speed of 215 km/h and the diesel variant touches 209 km/h. Other features include a 10-inch display InControl TouchPro infotainment system that is attached to six-speaker audio system. The company has partnered with Meridian speakers to bring 380 W version speakers with 10 speakers and 825 W Digital surround sound system with 16 speakers and a sub-woofer. It comes with two panoramic sunroofs, parallel park display and a 360-degree camera. The New Discovery is expected to compete with Audi Q7, BMW X5, Volvo XC90 and Mercedes Benz GLE.  According to the report the bookings for the SUV has started and the vehicle will be delivered to the customers in November.