Ford EcoSport 2017 has received both external and internal upgrades in terms of design and specifications.

American automaker Ford has unveiled the new 2017 EcoSport in India. Ford EcoSport 2017 comes with upgraded features, a refreshed design, and a new and an improved engine. The SUV will be launched in November in India. 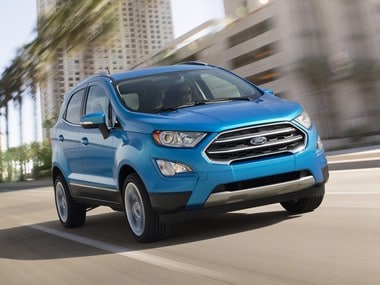 The company has brought considerable changes in the SUV including a design face-lift and new 1.5-litre Ti-VCT 3-cylinder petrol engine that produces 120 bhp of power and 150 Nm of torque. The car was first seen at the Los Angeles Auto show in the United States earlier in 2017.

The SUV has received both external and internal upgrades in terms of design and specifications. The cosmetic changes include a muscular hood, redesigned front bumper and grille on the front. The SUV has a new alloy wheel pattern and is now equipped with bigger fog lights and daytime running lights.

The interior of the Ford EcoSport 2017 has been upgraded too. According to a report on CarandBike the Ford EcoSport 2017 comes with new dashboard design and a bigger infotainment screen-8-inch in the top variant and 6.5 in mid variants- that allows to play music, show directions. The support for infotainment system has been extended to both Apple CarPlay and Android Auto, which allows the user to connect Apple and Android devices with the system. Ford EcoSport comes with Emergency Assistant System that places an emergency call in the case of an accident.

Other feature of the SUV includes various electronic riding options including traction control, cruise control and Hill Shift Assist. The Diesel variant of the Ford Eco-sport comes without automatic transmission. This SUV has been successful in India and an earlier price cut allowed it to maintain its market. According to the report Ford is also planning to export the vehicles manufactured in India to the USA. The Ford's SUV is expected to compete with Maruti Suzuki Vitara Breeza, Tata Nexon and Mahindra tuv. The previous model of the EcoSport starts at Rs 7,21,200 in India.