The MT-15 should have ideally been positioned with the likes of TVS Apache RTR 200 4V.

Yamaha India, of late, has been on a revival strategy, realising that its core strength lies in the performance-oriented motor. It's what the audience identifies Yamaha as, and the popularity, as well as sales figures of the YZF-R15 v3, is proof of it. It's not surprising then that Yamaha has introduced a new street naked that's based on the same platform as the R15. Say hello to the 2019 Yamaha MT-15.

What do we mean by the same platform?

Well, the MT-15, essentially is an R15 sans the fairing, to put it simply. Which means the sweet Deltabox chassis, 155cc liquid-cooled, 4V, single-cylinder engine and suspension are the same on the MT-15 as on the R15. But that's where the similarities end. The design, to begin with, is in line with the other MT series of motorcycles, such as the MT-09. So the body panels are minimal, the tank is small, the tail section is stubby and there is no bikini fairing around the headlamps. Now, that is an area that I particularly like as it lends the MT-15 its unique identity. The shape of the twin LED position lamps to appear like a pair of mean eyes and the single, LED projector lamp that's placed below it completes the look of an aggressive face. In fact, the entire design has just the right amount of aggression for a street fighter.

The matte blue paint on our test bike was well finished and you certainly get the feeling of a well-built motorcycle when you observe the panels and the way they are put together. That said, the switchgear and bar-end weights could've been made using slightly better quality materials. 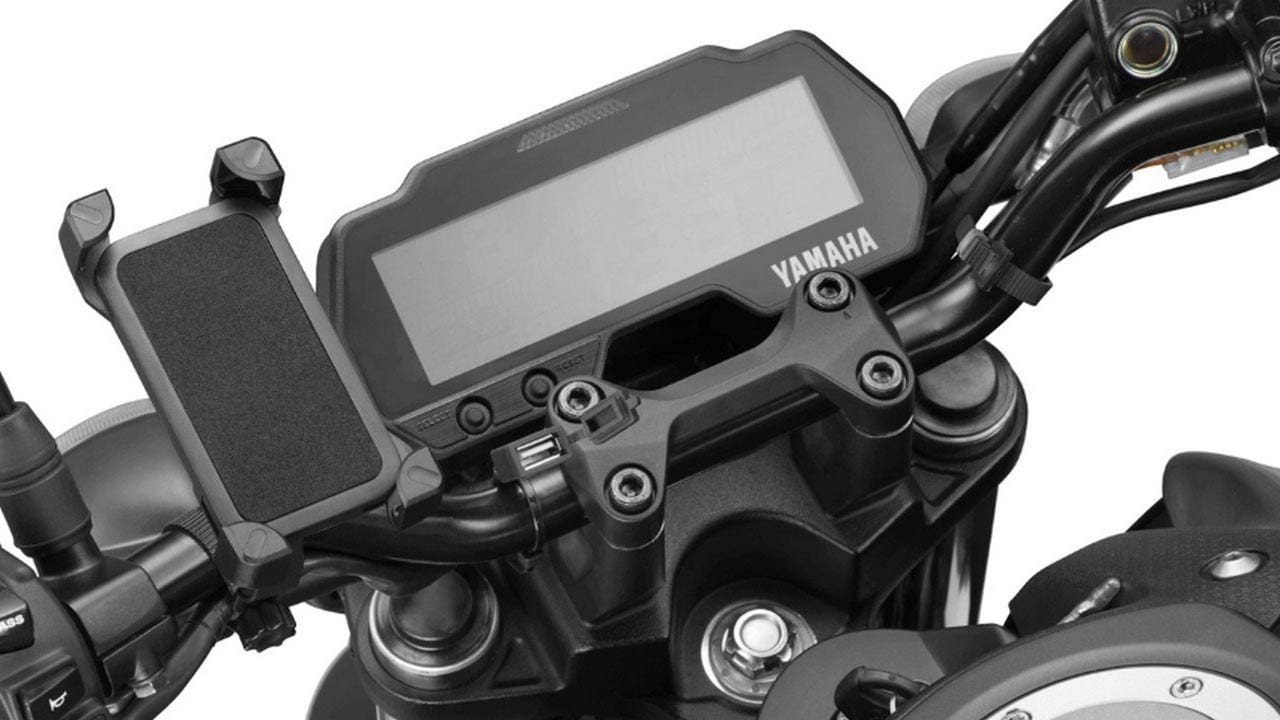 The design, to begin with, is in line with the other MT series of motorcycles, such as the MT-09. Image: Yamaha

But is it cramped in the saddle?

Well, not exactly, though you would be forgiven to think so when you look at the single-piece seat. Let's just say that room in the saddle is just about enough for someone with a large, well-fed frame, like me!

When you get on the seat, you get locked in between the step on it and the tank. There's barely any room to move about, but if you like a focussed/ locked into the motorcycle kind of riding position, you won't really mind the way the MT-15 fits, like a glove. The single piece handlebar is not set too low and this along with the rear set footpegs, puts you in an aggressive, yet comfortable riding position that also goes with the intent of the motorcycle. An ergonomic niggle, though, is that my heel kept fouling with the pillion footpeg. Bigfoot, beware!

And you are greeted by the familiar exhaust note of the YZF-R15. Yamaha, thankfully, has not meddled with the 155cc, liquid-cooled, four-valve, engine, hence it produces the same 19.3 PS and 14.7 Nm. It's mated to a six-speed transmission with an assist and slip clutch. I was happy to note that the MT-15 has the same, rev-happy nature of the R15's engine and coupled with the VVA ( variable valve Actuation), similar tractability as well.

The key change, keeping in mind the MT-15's street-focused nature, is the revised final drive ratio. This was achieved by fitting a bigger, 52 teeth sprocket at the rear (48T on the R15) which results in quicker acceleration off the line, albeit at the expense of top speed.

Out on the BIC, the MT-15 felt punchy from the word go, and its lightweight (138 kg) helps in that regard. But progress post 110kmph is slow, as expected. So, in the city, where there are short bursts of acceleration between lights, the MT-15 will be quick and we will confirm this during the road test.

Refinement levels are as good as on any Yamaha, with only a few vibes creeping in through the handlebar, close to the redline. Yamaha has further dropped the trail on the MT-15 making it sharper! Image: Yamaha

But a motorcycle is Yamaha only when it can handle, no?

Yes, and MT-15 does not disappoint in that respect. Firstly, it's the sublime Deltabox chassis that offers unadulterated feedback. Secondly, it's the tinkered steering geometry that lends the MT-15 it's sharp handling.

While the YZF-R15 v3 itself has sharp steering, Yamaha has further dropped the trail on the MT-15 making it sharper! So, in layman's terms, the MT-15 is slightly quicker to turn in, than the already quick turning R15. The effect is, of course, compounded by the leverage that the wide handlebar offers. The lightweight also makes it flickable which should make it a happy tool to slice through city traffic.

Around BIC's fast and flowing corners the MT-15 remained poised and confident as soon as you tip the bike into a corner. And though the MT-15 has a regular, box-section swingarm opposed to the aluminium unit on the R15, there is no perceptible negative effect on handling.

The tyres, though, were the only bit that kept me from going all out, especially because of the lack of feedback from the front tyre. A grippier set would be more than welcome, Yamaha.

Also, the brakes felt wooden and lacked initial bite. Now, considering how quick this bike is and the potency of people engaging in traffic light GPs, a sharper unit would do wonders in boosting confidence while braking late and hard. ABS does help matters here but Yamaha is surprisingly only offering a single channel setup. 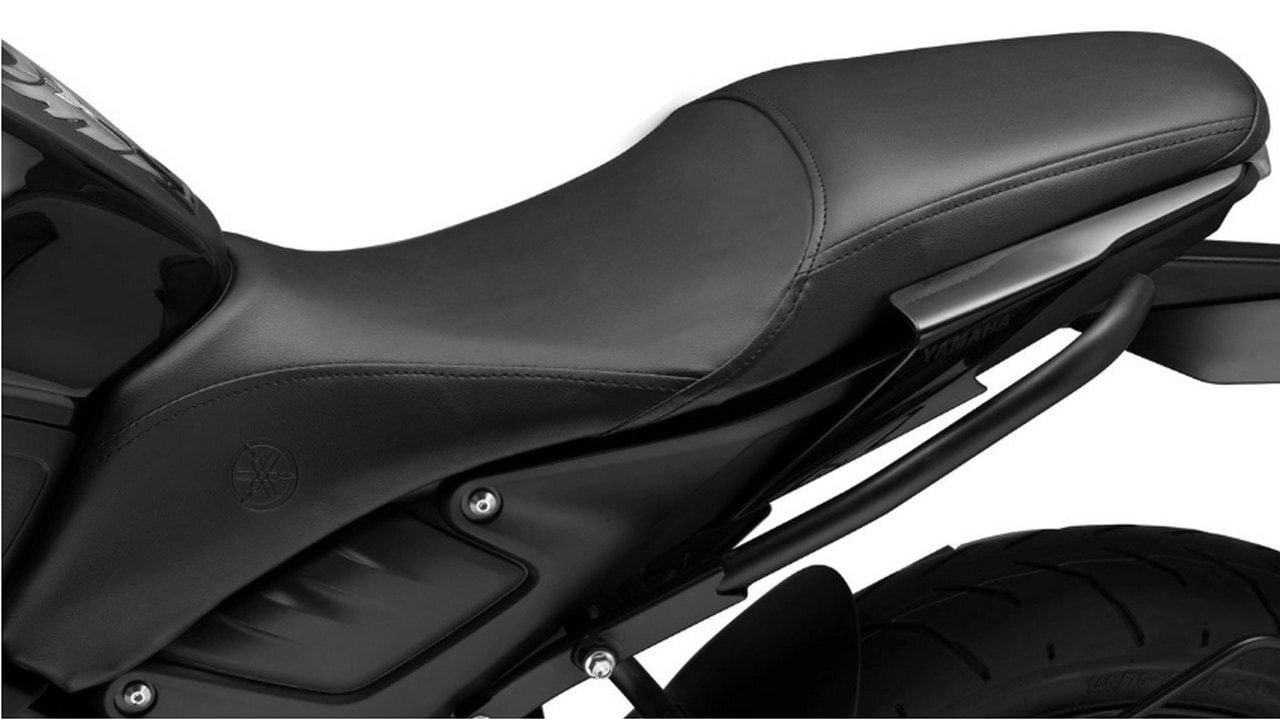 Let's just say that room in the saddle is just about enough for someone with a large, well-fed frame, like me! Image: Yamaha

So a good buy?

Let's keep price out of the way for a minute and when you do that, you realise that the MT-15 is a really good motorcycle for the urban environment. It's agile enough to ride past city traffic and will not feel out of place on a Sunday canyon road run. The engine is a gem, we know after our experience with the R15 long-term bike.

When you consider that the MT-15 does not have a fairing, no aluminium swingarm and only a single channel ABS, you'd expect the price gap to the YZF-R15 to be significant. But it's not. At Rs 1.36 lakh (ex-showroom), the MT-15 is only Rs 3,000 cheaper than the R15 and that's a concern. The price gap should've been bigger and the MT-15 should have ideally been positioned in the vicinity of the likes of the TVS Apache RTR 200 4V or Bajaj Pulsar NS200 to make sense.

The only reason you'd pick the MT-15 over the YZF-R15 is if you hate the committed riding position of the R15 or just love naked motorcycles.