Riding the motorcycle feels great at the track and that's without feeling so sporty that riding it outside in the real world will become too hard to do.

The TVS Apache RR 310 is clearly the toast of the town. The response we have received to our first ride story, our walkaround video and other stories has been off the charts and its clear that TVS has hit the nail on the head when it comes to the small displacement sportsbike. Riding the motorcycle feels great at the track and that's without feeling so sporty that riding it outside in the real world will become too hard to do. 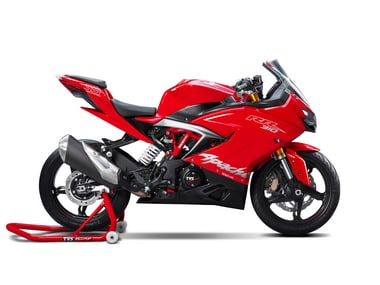 But TVS is entering a space that has some of the best motorcycles in India already. The two KTMs themselves are interesting. The RC390 dates back to the previous generation and that makes it a more raw motorcycle. It's a hardcore sportsbike in nature and doesn't suffer bad riding. On the flip side, KTM calmed the new generation 390 Duke down, upped the equipment quotient and the new one is a phenomenal performer at the track, out on the highway and in the city. We considered the addition of the twins, the Yamaha YZF-R3 or the Kawasaki Ninja 300/400 but decided against it because no matter what, they're twice the price. We did draft in a surprise, the USA-spec Honda CBR300R. That's here basically to establish a frame of reference for a 300cc single-cylinder sportsbike model and it's the closest we found. Also note that while we have added the BMW G 310 R to the table, we haven't commented on it. That's for the simplest of reasons - as you can see, the spec is very close to the Apache RR 310 but its role and intent is completely different so there's no point yet.

The Honda is a bit smaller for sure at 286cc. But the KTM displacement advantage remains as the TVS chooses to head for the BMW-TVS oversquare 312cc displacement. BMW's Dimitris Laparis had told use earlier that the size decision was centered on useability and uniqueness - "No one has a 310" - and the non-race focus of this displacement class easily permits TVS-BMW to choose this odd displacement.

The CBR shows a considerable power deficit and that's no surprise. It's only here as a representation of a recent single cylinder 300cc engine from a major manufacturer. TVS-BMW extract more power from their design with the same peak torque as the Honda and that too at nearly the same revs as well. But given that the weight of the TVS is the same as the KTM (and TVS uses a slightly taller final drive ratio than the BMW models), the KTMs will retain their upper hand in engine performance to be sure. That said, TVS says fastest lap times in class for the Apache RR 310. Ooh! The KTMs get the slipper clutches and that's a bit of a miss for the TVS. Wr could argue that the loss of the feature is important because of the track orientation of the machine but the truth is that these kinds of slipper clutches actually cut the level effort to as much as half which is very useful in our traffic.

It's close eh? The TVS is half a kilo lighter than the KTMs but the CBR is actually even lighter, a full 6kg to be precise. Note the identical kerb weights of the new Duke and the older generation RC. That's Euro IV equipment making its presence felt for you. It's no surprise that the two KTMs share their wheelbases - only the subframe is different apart from a minor difference in steering angle. But the Honda boasts the longest wheelbase by a smidge and no surprise, the TVS has the smallest one. This tallies with the generally neutral and measured feel of the CBR versus the frantic and responsive KTMs. In this company, that TVS-BMW's Frame shows a balance between the responses of the KTM and the composure of the Honda is worthy of praise.

Now that all of these bike have dual-channel ABS as standard it makes the likes of the outgoing Kawasaki Ninja 300 and the BSIV YZF-R3 a little under-equipped. But there are differences. The TVS gets a 300mm front disc versus the new 320m discs that are now standard on the KTMs. The Honda uses a smaller 296mm disc up front. 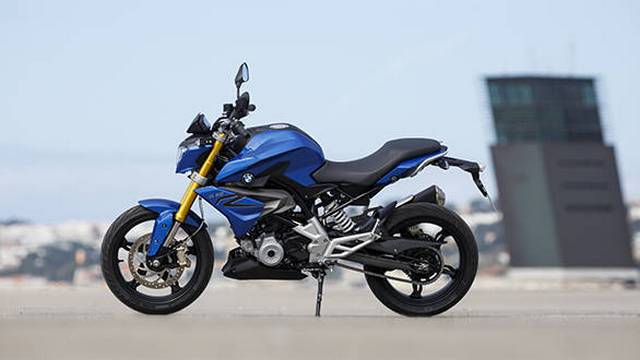 All the bikes here get preload adjustable rear monoshocks. Cartridge-style upside-down forks are the norm for the TVS and the new KTM 390 Duke while the RC390 uses the older 43mm USDs. The Honda is old school, preferring thinner 37mm right side up forks. 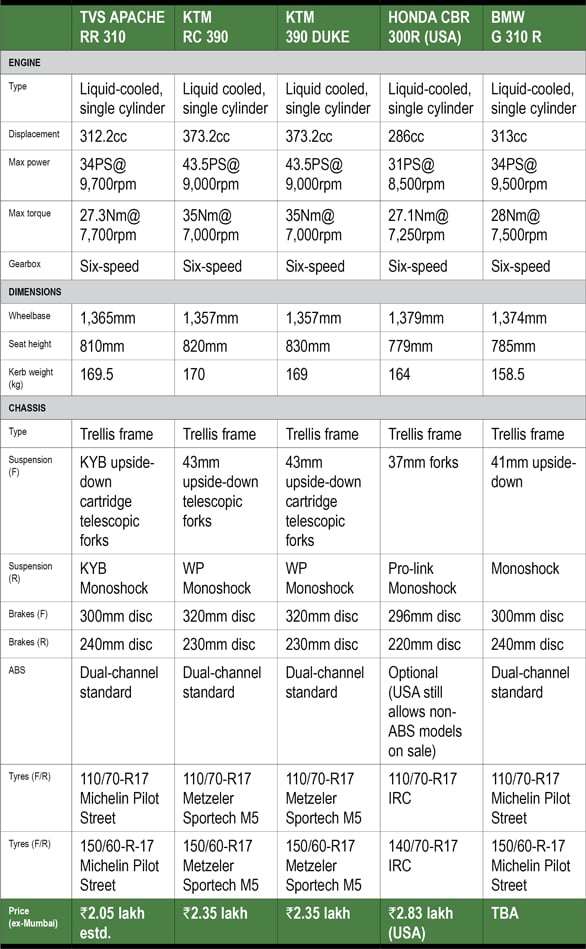