Mahindra has revealed the full variant line-up of the all-new Mahindra XUV700 ahead of commencement of deliveries; prices valid for first 25,000 buyers.

Having unveiled prices for entry-level versions in August, Mahindra has now announced the full variant line-up and introductory variant-wise prices for its brand-new SUV, the Mahindra XUV700. What will be of interest to potential buyers are prices for the top-spec XUV700 AX7 variants, which were under wraps until now. The Mahindra XUV700 AX7 petrol-manual is priced at Rs 17.59 lakh, while the automatic version costs Rs 19.19 lakh. The XUV700 AX7 diesel-manual on the other hand, is priced at Rs 18.19 lakh, and the diesel-automatic is the most expensive version of them all, costing Rs 19.79 lakh (all prices, ex-showroom). Deliveries of the XUV700 petrol will begin first. Image: Mahindra

As standard, the XUV700 AX7 versions come with space for seven passengers with three rows of seats, and an optional ‘Luxury pack’ – which adds the 360-degree cameras, Sony 3D sound system, blind spot monitor, wireless phone charging and electronic parking brake – is available for an additional Rs 1.80 lakh on the AX7 automatic variants. Additionally, buyers of the XUV700 diesel-automatic can also opt for all-wheel-drive by paying an additional Rs 1.30 lakh. 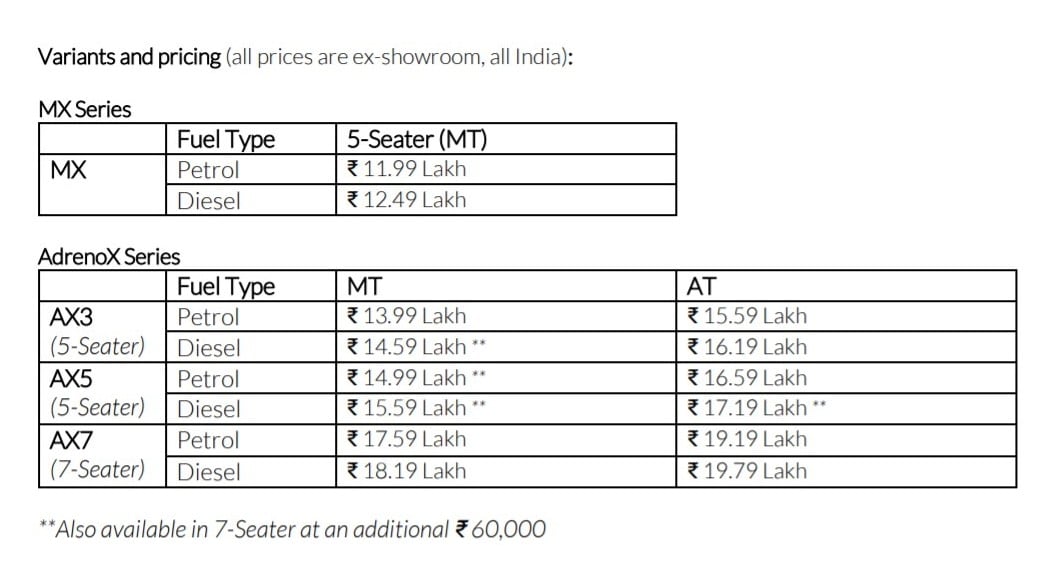 The XUV700 is being offered in two main trim lines - MX and Adrenox (AX). The MX line is essentially the entry point to XUV700 ownership, and misses out on most of the goodies, featuring 17-inch steel wheels, a smaller 8.0-inch touchscreen infotainment system, power-adjustable ORVMs and Android Auto connectivity. Prices for the MX variants are Rs 11.99 lakh for the petrol-manual version and Rs 12.49 lakh for the diesel-manual variant. Mahindra has announced these prices will be valid only for the first 25,000 buyers, post which they may witness an upward revision.

The highlight inside the Mahindra XUV700 is twin 10.25-inch 'Superscreen' layout, which is quite reminiscent of a modern Mercedes. There’s a fully digital instruments display, a bespoke Sony 3D sound system with 12 speakers, with the touchscreen unit running a new OS that Mahindra terms ‘AdrenoX’. This system integrates Alexa-based voice commands, a Sony 3D sound system and drive modes named ‘Zip’, ‘Zap’ and ‘Zoom’ (exclusive to the diesel XUV700).

Both engines come with a choice of a six-speed manual and a six-speed torque-converter automatic, and the diesel-auto version actually gets 30 Nm more torque, taking overall output to 450 Nm. It must be noted, however, the diesel engine will be offered in a lower state of tune in the entry-level MX version, producing a considerably lower 155 hp and 360 Nm of torque. Mahindra has also confirmed an AWD system will be available as an option.

Bookings for the Mahindra XUV700 will open on 7 October, and Mahindra will reveal the date of start of deliveries on 10 October. Deliveries of the XUV700 petrol will happen first, and Mahindra will commence test drives for the XUV700 in 11 cities (Delhi-NCR, Bengaluru, Mumbai, Hyderabad, Pune, Chennai, Ahmedabad, Indore, Lucknow, Coimbatore and Vadodara) on 2 October.