Stellantis outlines electric future: 98 percent of portfolio to be electrified by 2025

Battery electric vehicles from the Stellantis group will have a total range of 500 kilometres to over 800 kilometres.

Stellantis is a little late to the global electric vehicle party, but on Thursday it pledged to catch up and pass its competitors. CEO Carlos Tavares says that by 2025, 98 percent of its models in Europe and North America will have fully electric or plug-in gas-electric hybrid versions. He says the company that combined Fiat Chrysler and Peugeot is developing four fully electric vehicle platforms with ranges from 500 kilometres to 800 kilometres.

It also will have three electric drive modules to power all its vehicles, and Stellantis will take advantage of its scale to reduce electric vehicle costs. The company expects to reduce battery costs by more than 40 percent from 2020 to 2024 with two new battery chemistries. It plans to introduce solid-state battery technology by 2026 that can store more energy than current versions. The models include a fully electric Ram pickup in 2024 and a hybrid Jeep Grand Cherokee later this year, as well as small cars. There even will be an electric Dodge muscle car. The company says it will use its electric commercial vehicle expertise from Europe to build EV models worldwide. It says Jeeps, known largely for going off road, will have zero-emissions electric vehicles in every market segment by 2025.

Tavares says Stellantis will spend no less than 30 billion euros ($35.6 billion) over the next five years on EVs. It will build five battery factories in the U.S. and Europe. By 2030, 70 percent European sales and 40 percent of US sales will be full electric or plug-ins. he said.

“We are already in the race,” Tavares said during a 2 1/2-hour electric vehicle day presentation via a transatlantic webcast on Thursday. “We are on a rolling start, and we are now accelerating full speed.”
This year, he said the company will have between 30 and 40 battery electric and plug-in hybrid vehicles for sale globally through all 14 of its brands. The bulk are in Europe, and at present there are no fully electric vehicles for sale in the U.S., the world’s second-largest market. 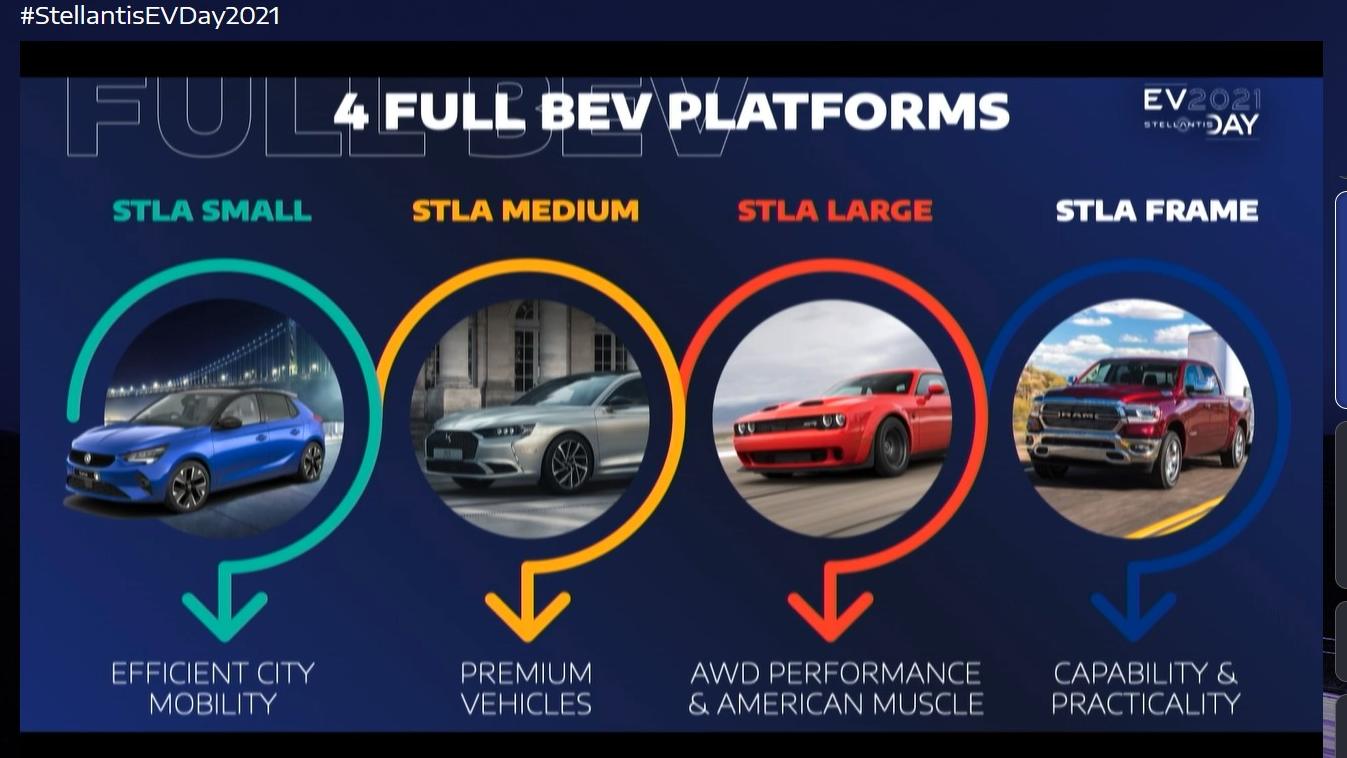 All future BEVs from Stellantis will be based on one of four dedicated electric vehicle platforms. Image: Stellantis

Of the fully electric and hybrid vehicles, no fewer than 80 percent of them will run on batteries alone, Tavares said.

Stellantis says the Opel brand will go fully electric in Europe by 2028, with 100 percent of its vehicles in China being electric. It will bring back the Manta sports car with a fully electric version by the middle of the decade.

Tavares said Stellantis would convert plants that now build internal combustion engines and transmissions into battery cell factories. Of the five battery plants, three will be in Europe, including conversion of the Termoli plant in Italy.

The company said its pre-tax operating profit margin for the first six months of this year would exceed previous guidance of 5.5 percent to 7.5 percent, due to higher prices for vehicles and despite lower sales from production cuts. Stellantis and nearly all major global automakers have had to trim production due to a shortage of computer chips. It also expects negative cash flow in the first half due to capital spending and lower production.

Tavares expects sustained double-digit operating profit margins around 2026 and says synergies should bring electric vehicle costs down to those of internal combustion vehicles, even without government incentives.