For an expected price range of Rs 15-20 lakh (ex-showroom), the MG Hector offers a lot of SUV.

Hello MG! Welcoming the newest carmaker into the country is perhaps less appropriate than saying welcome back, to a brand with a storied past in the country. But, it's also the voice command that wakes the MG Hector's voice assistance program up, exactly how you would wake Siri, or Alexa.

'Internet inside' reads the questionable badge on the MG Hector, explaining how the SUV manages that, and MG are very proud of it, though it isn't entirely new in the world of automobiles, or to India, but the vehicle carrying it, is. The MG Hector is a five-seater SUV with a footprint approaching that of SUVs several segments above, and comes with a choice of petrol (or a petrol mild hybrid), and diesel powertrains with the option of an automatic gearbox only available with the petrol. What sets the MG Hector apart? Is it the way MG Hector looks?

Calling the MG Hector unique looking would be a massive understatement! It certainly stands out with its really high-standing hood, and old-school SUV silhouette, even with the pinched kink in the window line. The sheer face of the grille, split LED DRLs/headlight clusters and vast areas of brightwork help, with only the 17-inch wheels failing to fill out the squared off wheelarches, and resulting in comparisons being drawn to an MPV. MG tells us a larger 18-inch set as optional extras isn't ruled out at the moment, but also say the 215/60 R17 Goodyears are more than adequate, and anything larger would drop the MG's best-in-class emission figures. If you're really picky, the gunmetal split spoke alloys on the lesser variants do help make the Hector seem better proportioned, though they're identical size-wise to the diamond-cut alloys on the top variant. At an overall length of 4,655 mm, with a wheelbase of 2,750 mm, the MG Hector is a good deal larger than anything else in its segment or a segment above. Here's a reference point  the seven-seater Skoda Kodiaq is only about 40 mm longer. If you like your SUVs big, bold and brash, the MG Hector has that brief nailed down solidly  and while the hood and tailgate shut lines aren't even, the rest of the SUV is well finished.

What about the MG Hector's cabin?

There's no way you're forgetting the 'Internet car' title from behind the steering wheel either, with full digital instrumentation ahead of you, and a 10.4-inch touchscreen infotainment system immediately being differentiators  it's the largest touchscreen in the country! Both of which are segment firsts, by the way.

And while the instrumentation isn't of the highest definition, the infotainment is suitably crisp and only trips up with loading times if you switch between three functions or more quickly. The novelty of the voice commands will probably wear off after a while, but the ease of use of the touchscreen layout won't. The only function we wish we had physical controls for is the climate control, since trying to move a slider for the temperature/blower accurately while on the move takes some skill. The MG Hector comes with the Gaana app and a premium account, and the Infinity-tuned eight-speaker audio has a surprisingly clear and wide soundstage.

It's a simple design for the cabin, drawing your eyes to the central touchscreen, and it works well enough with most of the materials used in its making feeling on par with the segment, with the exception of some of the harder plastics used on the door pads. Visibility is great with the slim A-pillars, and finding a comfortable driving position isn't a task with a powered driver's seat. The cushioning is soft but doesn't seem like it'll cause problems on longer drives. Here's where the rear bench comes into its own, with more than enough legroom and an adjustable angle of recline that allows you to truly stretch out. The MG Hector isn't the widest SUV but space is optimised well, and three passengers on the rear seat wouldn't be uncomfortable over longer distances. The feeling of space is further heightened by a massive panoramic sunroof, with an electrically operated blind. The powered tailgate reveals a boot that will take in 587 litres of cargo, and would probably take in more if it weren't for the flat floor hiding more space under for your odds and ends.

There's an FCA-sourced 2-litre diesel with 170 PS/350 Nm, the same as on the Jeep Compass, with a six-speed manual gearbox and a claimed 17.4 kmpl efficiency figure. And a 1.5-litre, 143 PS/250 Nm turbo petrol from MG's parent company SAIC, available with a six-speed manual, or a seven-speed dual-clutch automatic. The same engine is also available with a 48 V mild-hybrid system, though only as a manual. 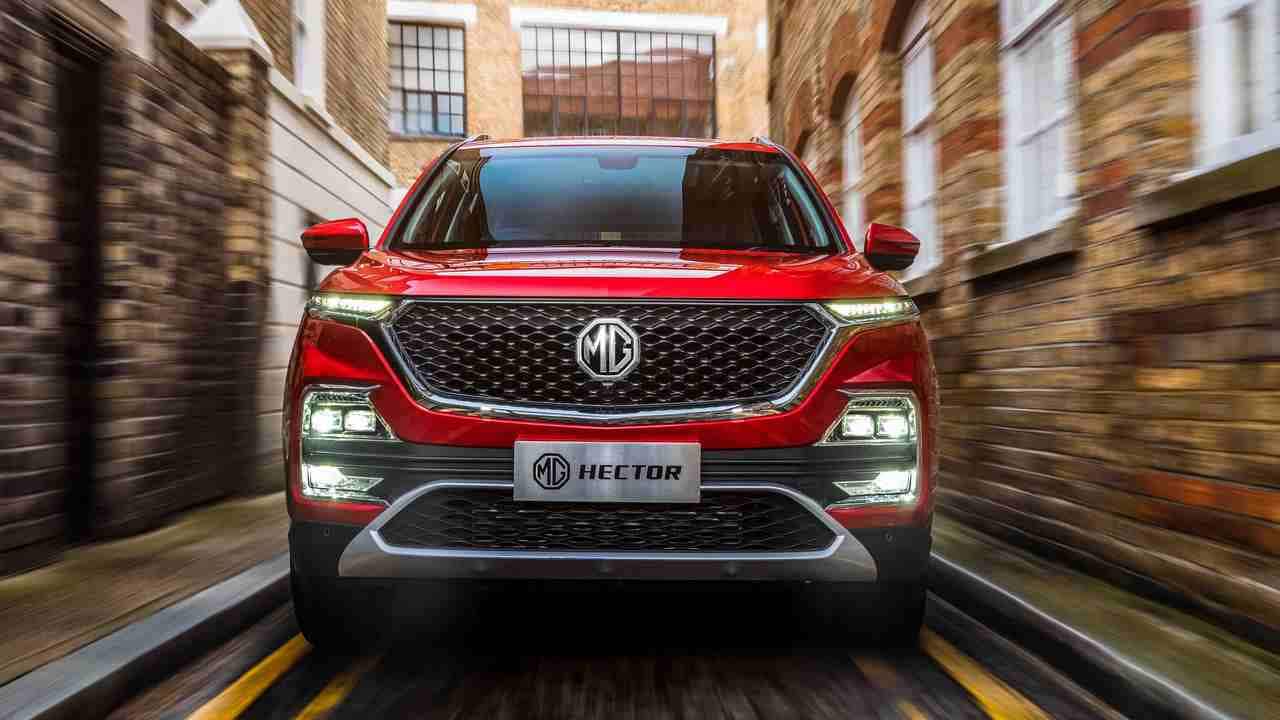 The mild-hybrid system works via an integrated starter generator, and is said to provide up to 20 Nm of torque to fill in gaps in the powerband, has batteries that are recharged during braking and coasting and overall lifts the petrol manual's 14.1 kmpl efficiency figure to 15.8 kmpl. If you're wondering if these engines are BS6-compliant  they aren't as yet, and MG is betting heavily on the easily (and cost-effectively) upgradable petrol hybrid to draw in the crowds once the diesels become more expensive.

How does the MG Hector drive?

Starting with the most impressive powertrain in the MG Hector, the petrol hybrid. Despite its capacity, the motor shows a likeable eagerness to build speed. It's a torquey engine, and doesn't seem underpowered even if you stick it in a higher gear than necessary. You do get the distinct impression of the mild hybrid system helping out, from low revs to just short of 3,000 rpm, with torque from the engine peaking at 3,600 rpm. Which also seems to be the ideal shift point to make quick progress. The six-speed has fairly long throws, but each gear slots in with a nice, positive feel.

Our drive around Coimbatore included a run up to the Kokanad viewpoint, and though there the MG Hector leans through the tight corners that mark the way up, it's well controlled between direction changes. Anis sitting in the back seat had no cause for complaint despite us trying hard to find the weak points in the Hector's handling. Drop the pace a little and you'll find the MG Hector a welcome long-hauler, even through the twisties. If anything, the appreciation that you have for the Hector's light steering at city speeds grows when you realise that there's little effort required to get it turned around tight hairpins. Back on the highway, hitting a series of dips and crests at 120 kmph didn't upset the Hector either, with the large SUV settling back down without bottoming out. The diesel, retuned for better low-end response compared to the Compass, shows exactly that. It gets into the power quicker, at around 1,600 rpm, but also tapers off quicker when you pass 3,500 rpm  though NVH seems better throughout. This means it makes for a better city SUV than the Compass, though the heavy clutch action remains. The added weight of the diesel (1,700 kg kerb vs the petrol's 1,644 kg) does result in a ride that's not quite as impressive as the petrol, which felt compliant and stable whether driving with just a single person in the SUV, or with three other passengers.

So, what's the word then?

We like the MG Hector  save for maybe the 'Internet inside' badge, and the fact that it feels like it could use a little more polishing, just a little more fine-tuning, to make it perfect. For an expected price range of Rs 15-20 lakh (ex-showroom), the MG Hector offers a lot of SUV, and a lot of segment firsts to keep even the most feature-hungry of customers happy.

MG Hector Plus bookings are now open in India: Here is all you need to know

From MG Hector Plus to Tata Gravitas, 8 SUVs expected to launch in India by end of this year