The Jawa Jawa is priced at Rs 1.66 lakh ex-showroom Delhi and the bookings are now open.

The Jawa flagship motorcycle in India, for now, is the new Jawa. Yup. That forces me to call it the Jawa Jawa as opposed to the Jawa Forty-Two. But let's not get stuck in the semantics. Because this is, for all intents and purposes, an all-new motorcycle, from an all-new company offering an all-new proposition.

That last bit perked you right up, eh? The Royal Enfield Classic 350 is a retro-styled bike to be sure. But it isn't designed to unabashedly ape the lines of some storied old Enfield — it's an interpretation. In contrast to that, the Jawa Jawa is shockingly close to the most iconic shape that we associate with the Czech brand's motorcycles. It isn't the exact same, but in silhouette, in proportion, in colour choices and in the choices of aggregates, Classic Legends has stuck very, very close to the old bike. That's a new proposition. In contrast to that, the Jawa Jawa is shockingly close to the most iconic shape that we associate with the Czech brand's motorcycles.

So visually, there's nothing like the Jawa Jawa on the market. It looks well-made from a distance and it looks old in a classy way too. Most people asked "Jawa?" instead of "What's that you're riding?" On the flip side, we were riding P1 prototypes - the production bikes are still a few weeks in the future as I write this. And that meant there were glitches that Classic Legends says will not be on the production bikes. There were small ones like a fuel gauge dial that make it impossible to figure out how much gas was in the tank as well as odd choices, like a digital odometer that doesn't have trip meters at all.

But on the flip side, the engine is really likeable. The 297cc single is liquid-cooled and fuel-injected and runs a four-valve DOHC configuration. Classic Legends tuned it for low- and mid-range. This means that acceleration from a standing start feels nice. As the revs comes up, the mid-range proves to be crisp and useful. This state of tune also means that the power tapers off as you go higher up the revs. To wit, the peak torque is 28Nm and it peaks at about 4,750rpm. Peak power is 27PS and that arrives at about 6,000rpm. The peak revolutions figures are approximate because, strangely enough, Classic Legends has still not officially revealed them so far. 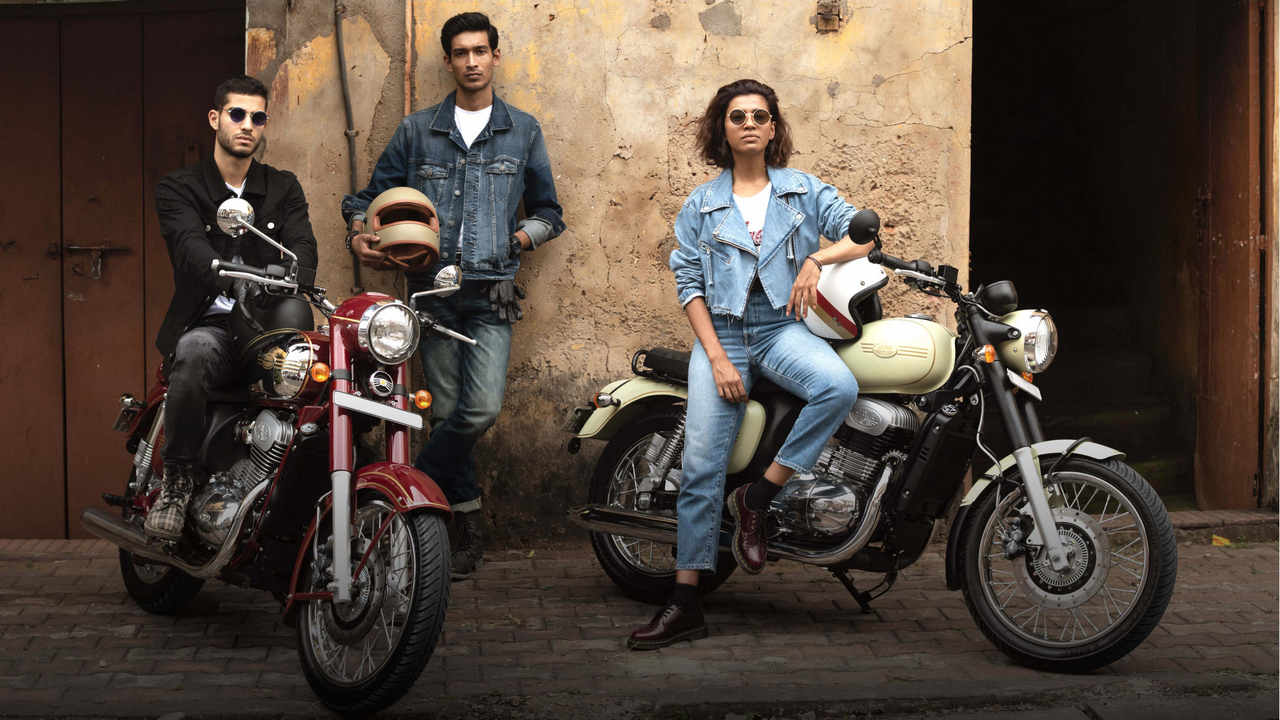 On the roads, this means traffic is easy to deal with at most speeds. Out on the highway, you'll find the bike smooth till about 80kmph after which some vibration enters the picture. Up to about 105kmph down the highway is easy enough. After that, you can get up to about 125kmph with ease but there is some vibration through the pegs, the tank and the bars at these speeds. These numbers are read of the reverse-oriented speedo, though, not Vbox measured.

The six-speed gearbox keeps up happily and I had not issued with it. You do get to use it quite a bit when you're in the twisties though. The dance of gearchanges and the close ratios come together so that you can stay in the mid-range sweet spot and drive out of corners nicely.

And the Jawa seems to like corners. I wouldn't call it an accomplished handler, but it does turn sharply and easily. In fact, easy describes the handling to a T. It does carry more weight on its rear wheel than on the front, but the setup feels easy to understand and use. That said, I didn't get a chance to fully explore the cornering potential and that will have to wait for the road test. But whether it's sharp turns in traffic or climbing a mountain road, keeping the pace at a reasonable clip seems to produce a fluent experience. 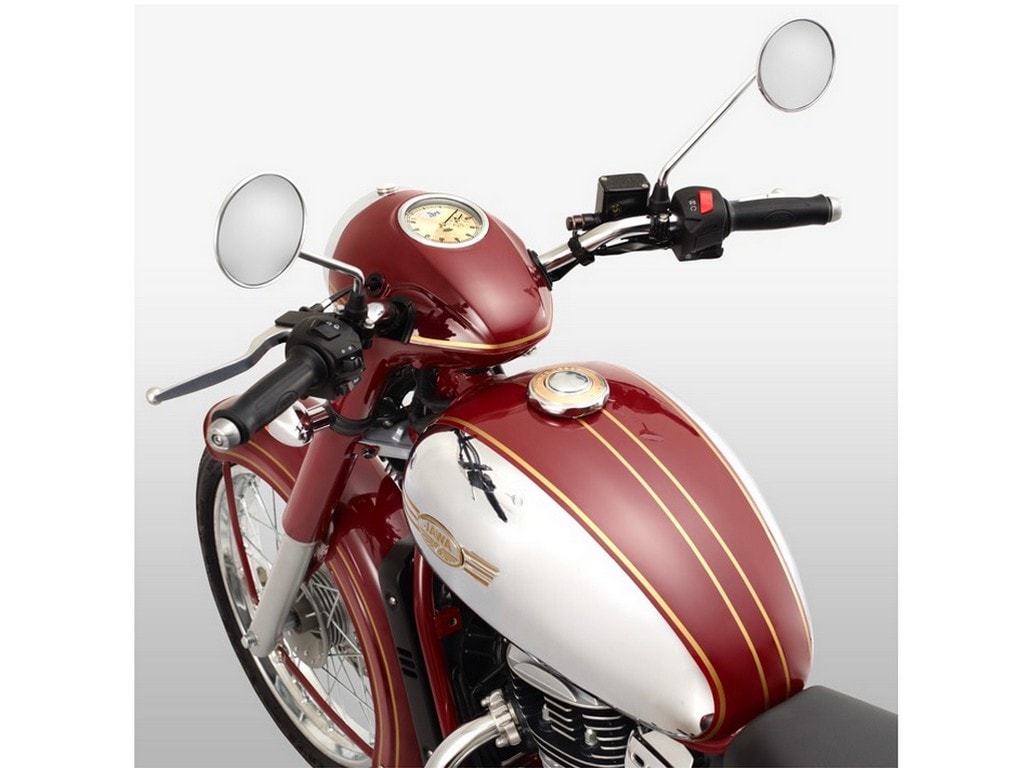 It does carry more weight on its rear wheel than on the front, but the setup feels easy to understand and use.

The brakes are nice too. The 280mm disc up front is tuned well and that 153mm drum at the back works well enough too. I do wish that Jawa had gone straight to twin discs and a dual-channel ABS set up instead of this though. But stopping is easy and that rear drum does offer some feel so you can modulate the braking quite well too.

This is a really simple motorcycle so there isn't much to talk about in that sense. That said, the headlight is impressively bright. The speedo is large and uncomplicated in the information it represents - though as I said, this isn't the final design. I didn't like the mirrors at all - they vibrate at speed and they're hard to adjust. And that's it.

The Jawa Jawa is being considered the big threat to Royal Enfield's bread and butter motorcycle, the Classic 350. Which I find incredible simply because the Classic 350 is about Rs 30-40,000 cheaper than the Jawa and I don't believe RE customers will gravitate to a *more* expensive bike that easily. The Jawa Jawa is priced at Rs 1.66 lakh ex-showroom Delhi and the bookings are now open.

But to me, comparing the Jawa Jawa to the Royal Enfield isn't the right thing to do right now. Because the Jawa Jawa has a unique, likeable feel. It feels genuinely old in some way and genuinely slick in others. I wish now that Classic Legends had brought us full-on production models so that we could see the final finish and feel of the product instead of this initial taste, though.

That said, I loved the suspension, liked the brakes, enjoyed the engine (at less than my usual pace, it must be said) and didn't mind the whimsically, decidedly, old-school design (I'm not a retro-bike chap either). The Jawa Jawa has the promise of being a genuinely nice motorcycle to waft about town on and go for club rides on the weekend. And this is a good start for Classic Legends in India, I think. The Jawa Jawa is priced at Rs 1.66 lakh ex-showroom Delhi and the bookings are now open. We expect deliveries to start end-January or February 2019. That's your wait - ours is the wait for the road test bike, heh heh.

Jawa Motorcycles to be launched in India this year, confirms Anand Mahindra