In concept form, the Husqvarna Vektorr has a limited top speed of 45 kph and a range of up to 95 km.

The Husqvarna Vektorr electric scooter concept has been revealed, as the Swedish two-wheeler manufacturer showcases its plans for the e-mobility business. A few days ago, Husqvarna provided a hazy glimpse of its first electric motorcycle, named the E-Pilen, and has now revealed a handful of pictures and details of what is the brand’s first-ever electric scooter; a break from the norm for a company named Husqvarna Motorcycles. However, it has its fair share of distinctive design and styling cues that clearly distinguish it as a Husqvarna product. 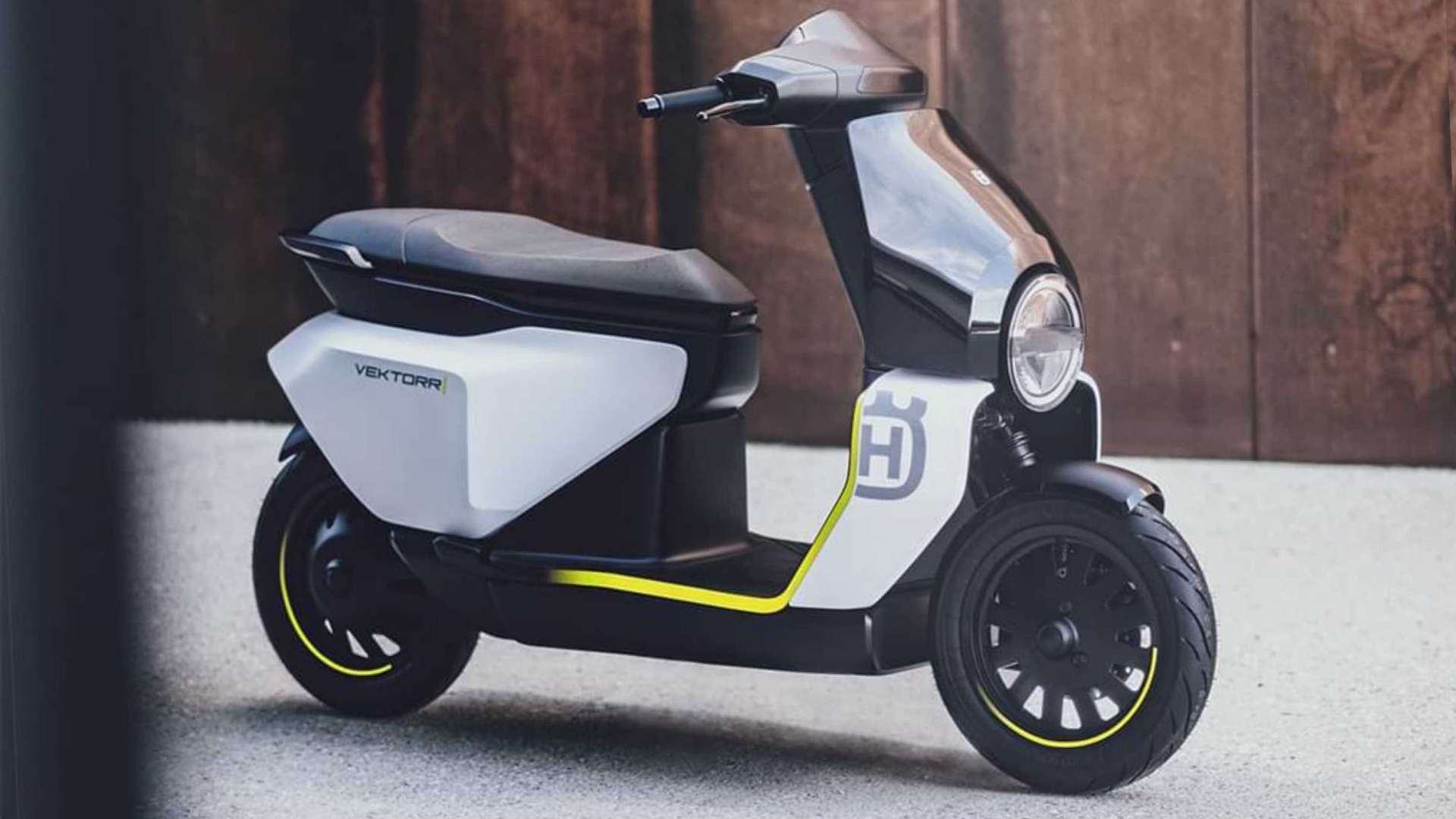 The Vektorr is Husqvarna's first-ever attempt at making an electric scooter. Image: Husqvarna

One of the most important things to note here is that the Husqvarna Vektorr is based on the new Bajaj Chetak electric scooter, which has been on sale in select Indian cities for some time now. You won’t be able to identify the link at first glance, as in typical Husqvarna fashion, the Vektorr wears edgy, monobloc-like bodywork. The round headlight (equipped with an LED DRL ring) stands out against the angular, squared-off panels, and the subtle black-and-white paint scheme is livened up with the help of fluorescent yellow accents along the sides and pinstriped on the wheels.

However, look closely, and you’ll be able to see the Chetak elements, such as the single-sided trailing link front suspension, single-sided swing arm, a mono shock at the rear, a swing arm-mounted motor (with a transmission sending power to the wheel, eliminating the need for chain or belt drive), 12-inch alloy wheels and a circular digital instruments display. 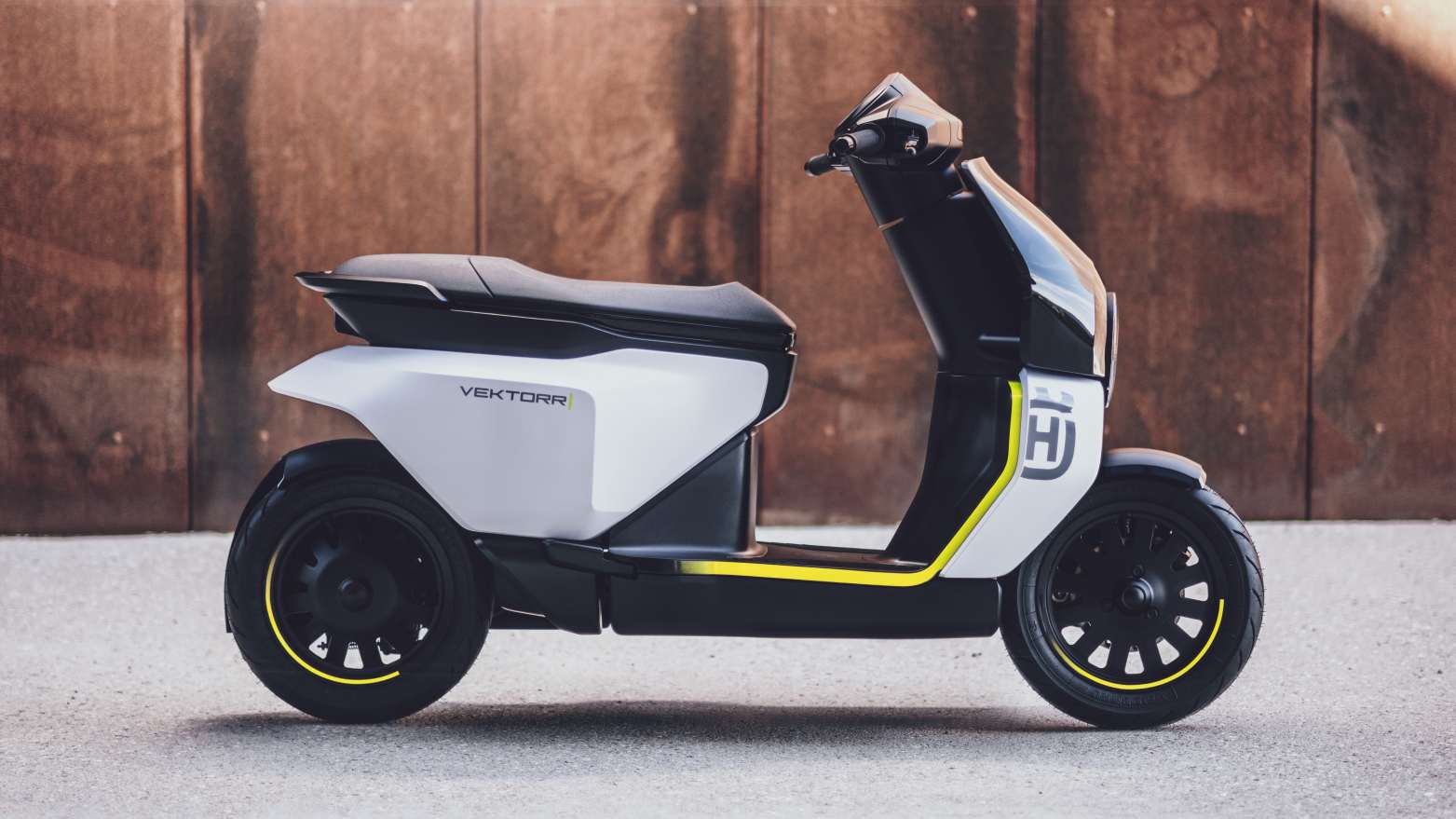 The Vektorr's 12-inch alloy wheels are on display thanks to the single-sided front suspension and swing arm. Image: Husqvarna

The Husqvarna Vektorr concept has a claimed range of up to 95 kilometres on a full charge – the same as the Bajaj Chetak (in Eco mode) – and has a limited top speed of 45 kph. This limitation not only helps enhance the range of the e-scooter, but also opens it up to AM-licence holders (above the age of 16) in European markets, who can ride mopeds with a top speed of up to 28 mph (45 kph). For perspective, the Bajaj Chetak can reach speeds of 70 kph in Sport mode, but this brings the range down to a maximum of 85 kilometres.

No other technical specifications have been shared at this time, but it is safe to say the Husqvarna Vektorr is likely to mirror the Chetak under the skin and have the same 3 kWh lithium-ion battery pack, and a motor output ranging from 3.8 kW to 4.1 kW and generating up to 16 Nm of torque. Charging times, too, are likely to be similar, with a full charge set to take around five hours. The production Vektorr is likely to come with a front disc brake but only a combi-brake system instead of ABS, along with ride modes, Bluetooth connectivity and a reverse mode, just like we’ve seen on the Chetak. 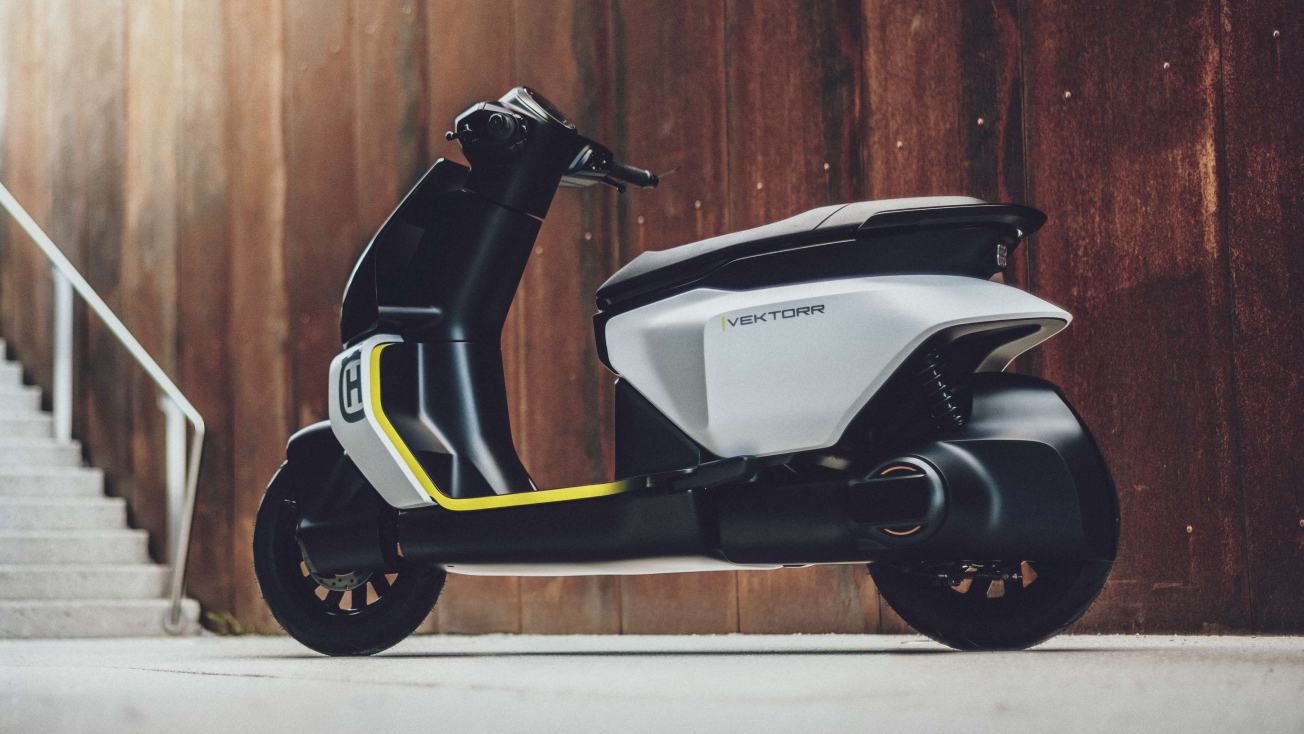 The Husqvarna Vektorr is likely to be launched in India sometime in 2022. Image: Husqvarna

The Husqvarna Vektorr will go into production early in 2022, and is set to be produced at the new Bajaj plant in Chakan, which is being built at a cost of Rs 650 crore and will manufacture premium models from KTM, Husqvarna and Triumph, as well as electric two-wheelers. Once Bajaj is able to meet demand for the Chetak, expect the Husqvarna Vektorr to go on sale here, too. However, it won’t be pocket-friendly – at this time, the most basic Chetak itself costs Rs 1.43 lakh (ex-showroom), and the Husqvarna, by nature of belonging to a premium brand, will almost certainly cross the Rs 1.5 lakh mark.

Husqvarna motorcycles to go on sale in India in 2017

Husqvarna Svartpilen 250 and Vitpilen 250 launched in India at Rs 1.80 lakh