They waited a while, but entered the electric space in style.

Mercedes had the gumption – and us, the good fortune – to organise one of the first car press drives since the pandemic hit. The case numbers don’t look encouraging, but there’s only so much time one can sit indoors and bang out copy based on news, not experience. This is especially true with the automotive space. The specs can’t possibly tell very much of the story, and that’s certainly the case with the EQC 400 – Mercedes’ entry into the Indian electric car space, and the first luxury EV available to the Indian audience. 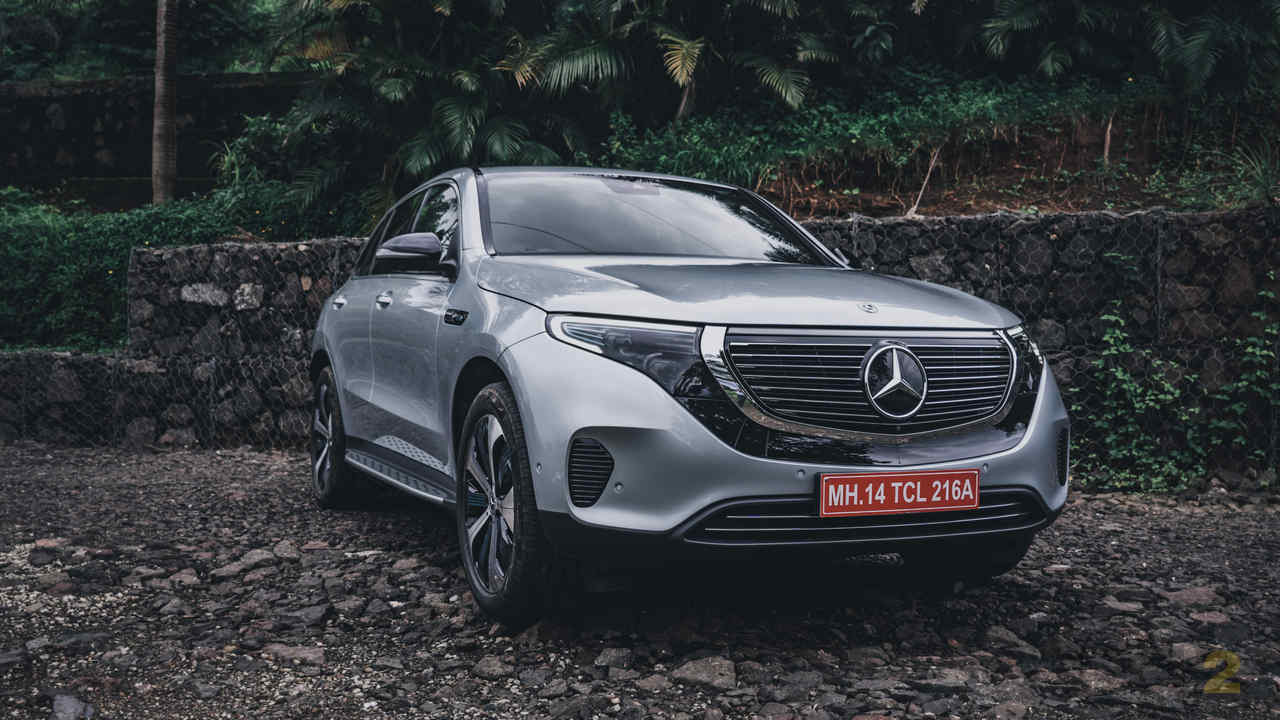 The slow process of the unlock meant that cabs were not advisable, so we had to make do with Mercedes’ own fleet of E Class sedans to ferry us from Mumbai to Pune. A very agreeable way to spend a couple of hours on the road. As you might imagine, the hospitality industry isn’t doing the best these days, which meant we had the Westin Hotel in Pune almost entirely to ourselves, presidential suite et al. Two cars available to drive meant no more than four journalists around. A quiet, unhurried press event. Most unlike the EQC actually.

The Mercedes EQC is a luxury electric SUV based on the GLC that they make with old-style internal combustion motors. We actually drove that “old-style” late last year and came back impressed, but with mixed feelings about the new ‘MBUX’ interface. More about that later. It’s a small-ish SUV – think of it as the C Class of the SUV range – but restructured for the new powertrain, which is all-electric. And what a powertrain it is! Mercedes didn’t hold back or give us any middling choices when it comes to the motor. Or in this case, motors – there’s one for each axle and combined, they output 408PS and an astounding 760Nm of torque. I can understand horsepower, but these torque numbers are the stuff of supercars!

Mercedes is clearly differentiating the EQC – and their electric vehicles in general – by making sure they look distinct, but still like Mercedes cars. While the GLC gives the feel of a nice, grown-up SUV, the EQC deliberately takes a long step into the future. Textures, colours and materials are quite different from what we’re used to in the luxury space, with blue being a signature shade.

Range is rated at 450-470km under NEDC (New European Driving Cycle), and our colleagues at Overdrive managed 295km with 35 percent battery left over. Expect a comfortable 320km, we think. The entire floorpan holds the 80kwH battery and yes, you can wade water without a short-circuit.

I am not a fan of tech for tech’s sake, particularly in cars. To my mind, automakers do gadgetry about as well as your family WhatsApp group does fact-checks. The EQC uses the new MBUX interface we first saw on the GLC last year, but with a much more luxurious, expansive screen setup. This time round, network coverage was adequate for the system to do its job. While response to voice commands is among the fastest I’ve seen, actual execution of those commands, or really, the usefulness of said commands is a question. I usually find it easier to look for and operate the relevant button or knob to do the same thing. MBUX, while slick and (initially) quick, is still too limited to be compelling. I found myself using it about as much as I use the much-touted voice assistant on the MG Hector – not at all. For a larger discussion on connected tech in cars, check out this video. The EQC uses the new MBUX interface we first saw on the GLC last year, but with a much more luxurious, expansive screen setup. Image: Tech2/Tushar Burman

One must appreciate the beautiful screens, however. The EQC goes more luxe than the relatively tiny central display in the GLC. There’s a large glass slab stretching from the centre of the dash to the driver’s side (much like the S class), giving the impression of one huge display (there are actually two separate units). The colours are bright, UI elements are chosen and sized to be appropriate for the situation. The centre console is also greatly cleaned up. There are a lot of buttons, but the kind I’d like to stay; there’s no need to mess around in a menu to change the AC temperature. Mercedes has thankfully avoided that weird UX hedge of including a jog dial with a capacitive trackpad ‘hood’ on top of it. There’s just a trackpad now, and it works fine.

At the ceremonial flag-off, I was acutely aware that there were but a handful of these vehicles in the country, most not even registered. Best to baby that insane torque down the ramp and avoid any drama. And that’s what hits you most directly – this is a Mercedes-Benz luxury car. It may look like it was purpose-built as a sci-fi movie prop, but it drives like a Mercedes. Same drive selector, same new MBUX interface, a familiar cockpit feel. It felt just like a Mercedes should, rolling down the ramp from one of Mercedes’ Chakan plant buildings down to parking while we made arrangements to set of for the day’s drive. Popping the hood, I made the too-easy “oil-paani check” joke for the ‘gram with my co-conspirator, Nishant. You might expect a front trunk, or ‘frunk’, but there’s none there. It looks just like a regular car with a giant plastic shroud just like you’d see in a modern petroleum-burning vehicle. The EQC is not exactly like a GLC to my eye. The numbers say it’s a 100mm longer, and it looks it. At a modest pace, it feels about like any other car from the Mercedes stables, in that it’s not that shocking. That’s credit to M-B’s stellar, quiet cabins; the EQC didn’t feel dead-silent and shocking as I imagined an EV to be. It’s just slightly less noisy than a typical Mercedes. You’ll hear more road noise, a bit less wind noise, but that’s about it. The EQC is electronically limited to 180kmph, and it will get there quite quickly. Image: Tech2/Tushar Burman

Comfortable range and swift performance mean that the EQC is a heavyweight – close to 2.5 tonnes. Thanks to the prodigious numbers the motors output, one doesn’t feel this at all while driving. I did feel it while braking suddenly for one of Chakan’s many unmarked tactical carbreakers. The EQC makes its weight known as the mass pitches forward (a bit) and the brakes do their best to slow the chunky SU(E)V. My timing was poor, so we ended up crashing over the speedbump and giving the springs a nice workout. The suspension coped admirably, but again, the weight was evident. The 760Nm of torque is instantly, and if you like, violently available when you push the throttle. Image: Tech2/Tushar Burman

Mercedes has taken pains to build a compact, flat floor that houses the large battery while ensuring passenger accommodations are not compromised. The nice, flat floor on the inside is comfortable, but the side facing the ground gets a bit too close to it. We managed to ground out the floor of the EQC a couple of times, on surfaces that most cars would coast over. This is a fair concern on Indian roads. Mercedes has taken pains to build a compact, flat floor that houses the large battery while ensuring passenger accommodations are not compromised. Image: Tech2/Tushar Burman

Flatter roads, well, flatter the EQC. Our quick dash between Pune and Mumbai was accomplished on the Expressway, where the EV was really able to flex. The 760Nm of torque is instantly, and if you like, violently available when you push the throttle. I’m a lazy driver, and I like quick transmissions and lots of torque to perform overtaking manoeuvres. Check and check. Being an EV, the EQC has only one speed – fast! It was enough to catch me off guard when I was trying to get around a truck quickly. The throttle responds so quickly and the thrust is so overwhelming, that I almost put the 2.5 tonne SUV into the shoulder on the opposite side of the road. One needs to re-calibrate one’s right foot to adjust for this alacrity. 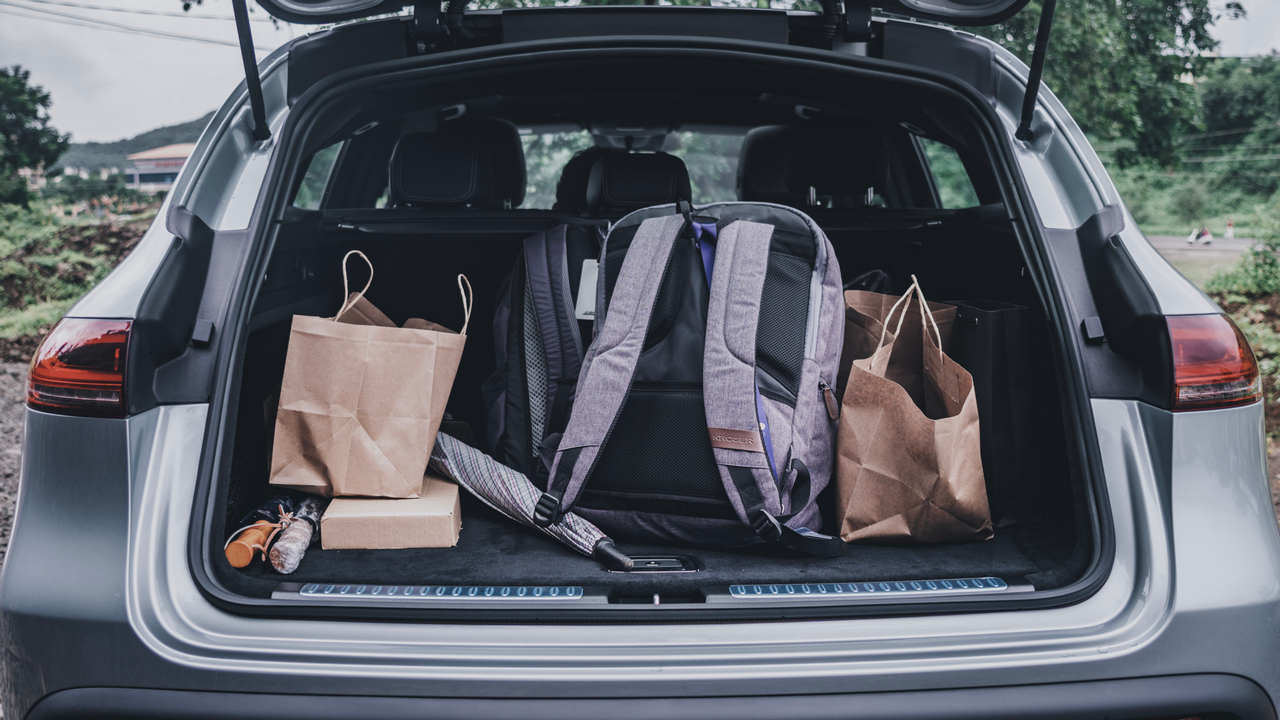 Cruising on the E-way, I had a chance to try out the different regenerative drive modes offered by the EQC. Despite having no transmission, the SU(E)V has paddle shifters, that switch between different levels of regenerative braking. Keep it in D and it feels most like a regular car. Put it in D+ or D++, and very aggressive regeneration makes it feel strange. There’s little to no coasting in these modes, and you can almost drive without brakes. Just lift off the throttle, and the car stops quite quickly, while recharging the battery. On the opposite end of the spectrum is D- mode, which allows the SU(E)V to freewheel and coast, enhancing range. I mostly left it in D and enjoyed the turn of speed. The EQC is electronically limited to 180kmph, and it will get there quite quickly. I didn’t bother throwing it around corners (there is some body roll, but it’s okay) but the sheer mass of the vehicle gave me pause when I felt tempted to crack the whip. It’s quick.

The obvious question about any EV is related to charging infrastructure. That’s actually not such a hard answer to give. Based on Mercedes’ research, most people prefer to recharge their EVs at home, overnight. Ubiquitous fast chargers would be nice, but they’re not strictly necessary when the EV has sufficient, practical range. The EQC does. Before selling you one, Mercedes will inspect and assess the feasibility of installing a wall box charging unit at your residence or office. This comes with the vehicle, and can recharge the EQC completely in 10 hours. 50KWh chargers (Mercedes claims over 100 are available) can bring this down to 90 minutes. If you consider our estimate of 320km on a full charge, one should be able to go a full work week on one charge, with no overnight recharges. Mercedes is also bundling an 8-year battery warranty, and 5 years of overall warranty and roadside service, really pushing the practicality of the EV. Just lift off the throttle, and the car stops quite quickly, while recharging the battery. Image: Tech2/Tushar Burman

The Mercedes-Benz EQC is unique. It’s the first of its kind in India, has a distinct level of performance that’s hard to match, or even explain without experiencing it. It allows you to get a rare green number plate, signal virtue and be infuriatingly smug all at once. The question is, does the Rs 99.30 lac (introductory, 50 units) price tag spell enough value for the prospective buyer? For that kind of money, there are plenty of more traditional – even performant – options available. But those only let you be smug.