Ford hasn't changed the Endeavour drastically for 2019, because, why mess with a winning formula?

The difference between off-roading and dune bashing is that, in the sand, if you can't make it up an obstacle, it's only because you're stuck — no second chances." Coming from Vikas Tanwar, rally driver, accomplished off-roader and the man leading us into India's largest desert, those words hang heavy, as we find ourselves staring up towards the rolling hills of sand of the Thar desert. More so, because we're in Ford's new baby, the refreshed Endeavour.

While we're not all-too-familiar with driving in the sand, we're well versed with the Endeavour, which Ford hasn't changed drastically for 2019, because, why mess with a winning formula? Accordingly, we're going to focus on what's changed, and what it's good at. Instead, it gets a few added goodies to make living with it easier, like the keyless entry, push-button start, puddle lamps, front powered seats and hands-free boot release. This, apart from a new grille, front skid plate, wheels and a new Diffused Silver paint job which matches the desert, to remind you of the fun you could be having in your Endeavour. We're more interested in the 3.2-litre under the hood, unchanged as well, especially since we get to test out the Sand mode in Ford's Terrain Management System in the most fitting place. So with the familiar mountain of torque, all 470Nm of it, we set off to bash dunes in dual-zone air-conditioned comfort. In the Sand mode, throttle responses are dulled so you can modulate it better. Image: Ford Endeavour

We're reminded that the very most basic thing to start with is to drop tyre pressures, to nearly half the recommended 35psi. To understand why, you've only to look at a camel's foot, which spreads and flattens to better distribute its weight over the soft surface. With cars, it has the added benefit of making our contact patch with the ground larger, so we have better traction, and thus a higher chance of overcoming mother nature. And she's being especially watchful out in the desert, constantly trying to bog you down. If you get on the throttle too much, too soon, you'll end up digging a hole for yourself. Even when coming to a stop, too hard on the brakes and you'll dig your front tyres into the sand. Here's where momentum comes in, build it gently, lose it even more so. It is a dance though since there are times when you have to mash the throttle to the floor, to keep the engine's momentum going, especially when you're climbing a dune — and yet stay slow enough on the descent so that the front end doesn't hit the ground. Thankfully, that's a little easier to manage, now that the Endeavour gets front parking sensors as well. 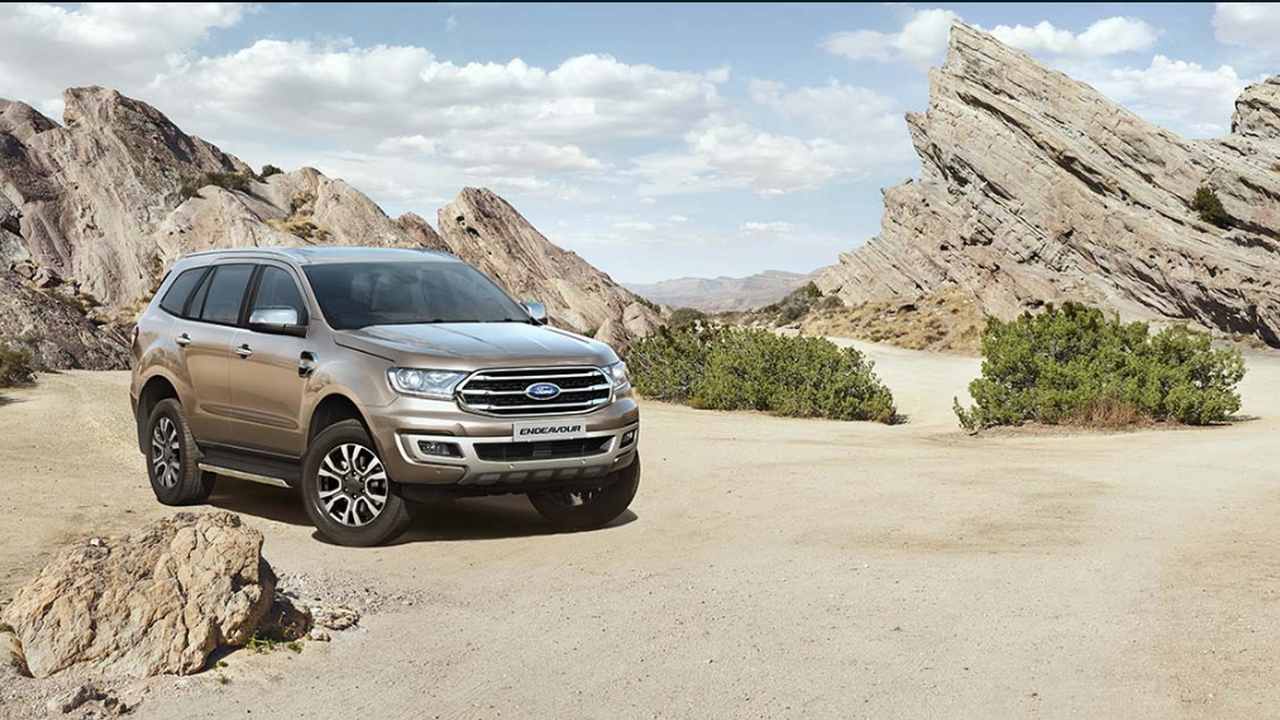 We found out pretty early that it works a treat with the Endeavour's all-time all-wheel drive. Image: Ford Endeavour

The Endeavour's trick up its sleeve is its Terrain Management System. In the Sand mode, throttle responses are dulled so you can modulate it better, the automatic gearbox holds on to a gear for longer, so you don't lose momentum between shifts, and the traction control is lenient allowing more wheelspin and thus more momentum. We found out pretty early that it works a treat with the Endeavour's all-time all-wheel drive, which can send the full 100 per cent of the torque generated to just one single wheel, if it senses that's the one that has traction. In fact, it was only when we set out to find the lowest possible speed that we could carry through a sand drift, and make a turn at the same time, is when the car came to a halt, refusing to move on further. Unfortunately, this happened pretty early on too, and we had visions of being stuck in the sand, all red-faced from the shame (not the heat), while the rest of the convoy pulled ahead. 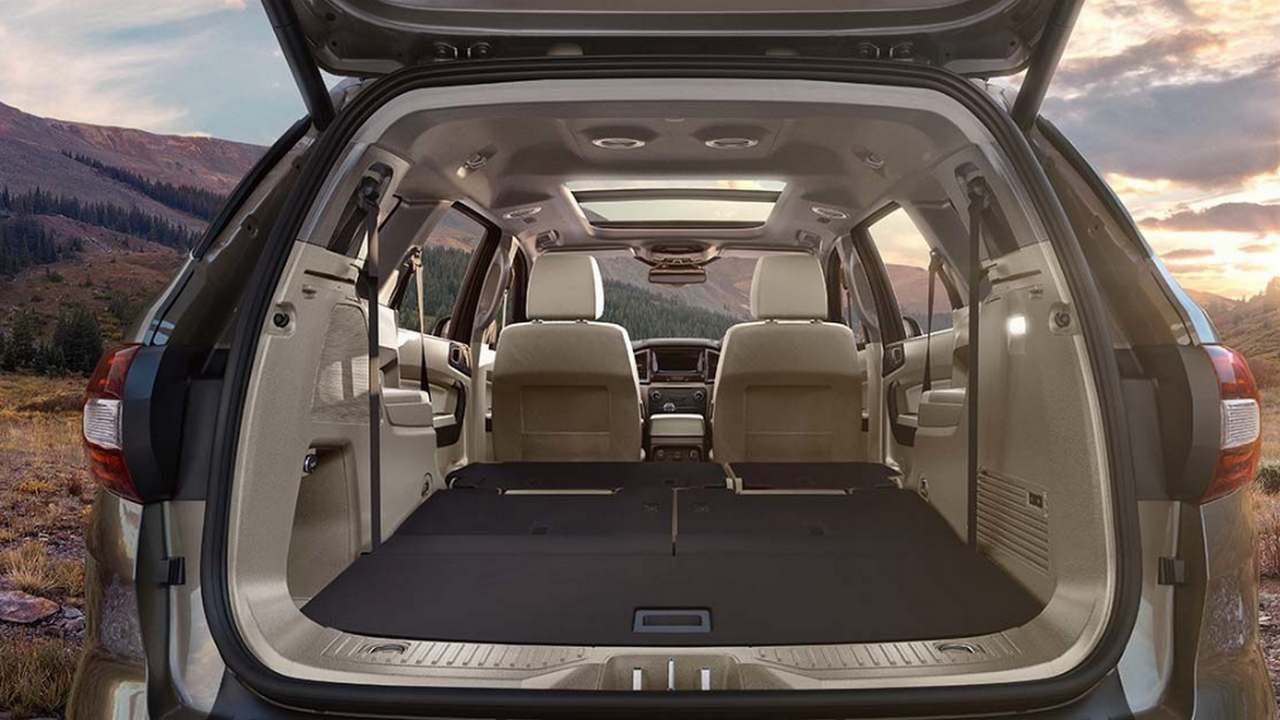 But this is where you use the Endeavour's get-outta-jail-free card — 4x4 low. All you have to do is shift into neutral, hit the button and watch as the SUV engages its low-range transfer case, effectively lowering the gearing and multiplying the torque available at the wheels. You can then choose to further beat the sand into submission by locking the rear axle, so that the rear wheels can't spin independent of each other, again just by the push of a button. With these two at your disposal, the Endeavour pulls itself out of any situation, and we really tried to get it stuck a few times. We came really close too — for future reference, never stop at the top of a dune! Image: Ford Endeavour

We came really close too — for future reference, never stop at the top of a dune! We could feel the front and rear of the SUV sinking into the sand the more we tried to get out. But four-low surprised us all (honestly took our instructor by surprise too) by clawing back and getting us out onto the other side, no sweat. This is the sort of capability you expect from hardcore utilitarian off-roaders, like the ones named after the desert we're in, not luxuriously-appointed seven-seaters. In the Endeavour, unlike said off-roader, you don't have to drive around the capabilities of the car, with torque on demand and the electronics intelligently managing to make up for your skill. The limiting factor was really just our ability to read the surface, especially when it was constantly changing, literally with the wind. No second chances? Well, we think the Endeavour has a little something to say about that, considering how all this capability, and added features come in at about half a lakh rupees lower than the outgoing model. Specifically, ex-showroom prices start at Rs 28.19 lakh, for the 2.2-litre manual Titanium, Rs 30.60 lakh for the 2.2-litre automatic, and go up to Rs 32.97 lakh for the 3.2-litre (both in Titanium+ spec).