Drew McIntyre stands on the cusp of glory as he prepares to square off against WWE champion Brock Lesnar at the grandest stage in WWE – Wrestlemania. Notably, if McIntyre vanquishes the Beast, he will go down in history books as the first British WWE champion. 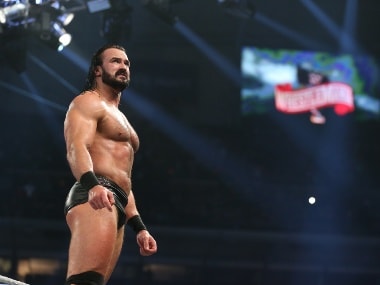 Drew McIntyre will take on Brock Lesnar for the WWE Championship at Wrestlemania 36. Credit: WWE

However, Drew finds himself in a unique position. The ongoing coronavirus pandemic has affected the global sporting scenario, and this year’s Wrestlemania too will take place without a live audience at WWE Performance Centre in Orlando, on 4 and 5 April.

Even without the backing and cheers of his fans, the 34-year-old is just as excited for his bout and is looking at the bigger picture for now.

“This is not exactly how I envisioned my title match or Wrestlemania to be. But I can’t be selfish and think why don’t I have the fans rallying behind me. I have got to look at the bigger picture. I’ve waited for a shot at the WWE title my entire life and if I am able to pull off a big victory and bring a smile on people’s faces, that’ll be just as special,” McIntyre told Firstpost during a conference call.

The towering Scotsman is proud of his company for giving people something to cheer about in these “difficult times”.

"Right now, whatever entertainment takes your mind off things, it is very essential. I’m very proud that WWE is pushing forward in providing the fans with some unique content and entertainment during these difficult times (of Covid-19). Obviously, we’re following safety protocols, having very minimal numbers in attendance and listening to experts. And we’ll go as long as it's safe to give the people their moment of escape.”

McIntyre eliminated Brock Lesnar, who had tossed 13 superstars over the top rope, en route to winning the 30-men Royal Rumble match. The 6ft 5 inches, 265 pounder then picked the Beast as his challenger for the WWE title at Wrestlemania.

Ahead of his 'Showcase of the Immortals' clash with Lesnar, McIntyre heaped praise on the former UFC champion and added that their bout will be remembered for the “sheer physicality” that will be on display.

“There’s no one quite like Brock Lesnar. Never was, probably never will be. He’s so unpredictable, such a freak athlete. But when we get to Wrestlemania, it is going to be a pub fight, a bar fight. We both are big, physical performers and not afraid of taking each other’s head off. People are going to remember the match for the sheer physicality of it. Hopefully, people are going to watch the match for not just my story or the fact that Brock Lesnar is the most dominant superstar of all time, but the fact that the camera is picking up everything, every hit that we give each other. And mind you, we don’t hold back."

While the Scottish Psychopath doesn’t have many post-Wrestlemania plans, when asked which other competitors he would like to lock horns with at a later stage in his career, Mcintyre signalled that he has his eyes on AJ Styles and Jinder Mahal.

“I am certainly not looking that far, happy to lift the title for one. But I’ve been fishing for AJ Styles for a while now. Styles and I haven’t wrestled. We’ve been in many companies together though. In the independent circuit, we were trying to set up a match but it never really happened. So, the Phenomenal One would be my pick.

Apart from him, I think Jinder Mahal. He’s been on the show for a long time. We have a lot of history together (from the Three Man Band). He was the WWE champion too and people didn’t react favourably to his victory. If I am able to pull off the victory, and people have rallied behind me (at the Royal Rumble), that’s something he might be excited about.”