Mitchell Starc continued his impressive World Cup campaign with a four-wicket haul as Australia overpowered Scotland by seven wickets in Hobart on Saturday.

Left-arm paceman Starc took four for 14 in 4.4 overs as Scotland, in their last Pool A match of this tournament, collapsed to 130 all out in barely half their alloted overs after losing the toss at Bellerive Oval. 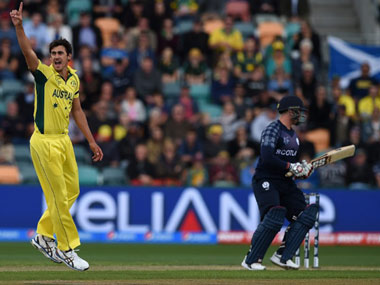 There were five ducks in the innings, with fast bowler Pat Cummins, recalled in place of dropped spinner Xavier Doherty, taking three for 42 in seven overs.

Matt Machan, who plays for English county side Sussex, top-scored with 40 and Calum MacLeod made 22 but at 79 for seven there was a real chance Scotland would be dismissed for under 100.

However, bold hitting from the ninth-wicket duo of Josh Davey (26) and Michael Leask (23 not out) took the non-Test side to three figures.

Australia captain Michael Clarke -- passed fit after missing training in midweek to rest his hamstring injury -- then decided to give himself some batting practice ahead of the quarter-final in Adelaide on March 20 by making a run-a-ball 47 opening the innings.

There was a worrying moment for Australia, when with 39 still needed for victory, rain stopped play.

But when the match resumed, new batsman David Warner -- usually an opener - settled Australia's nerves with a straight six and a four off the first two balls he faced.

Warner finished on 21 not out, off just six balls, while James Faulkner (16 not out) ended the match with a six as Australia finished on 133 for three in 15.2 overs.

Opener Kyle Coetzer -- who made 253 runs in Scotland's first four matches of this tournament -- fell for nought, his second successive duck, when his flat-footed drive off Starc was caught by Steven Smith at third slip.

Wickets fell in clusters and 36 for two became 37 for three when Scotland captain Preston Mommsen fell for a second-ball duck when he mishooked a Shane Watson bouncer to Starc at deep backward square leg.

Then 50 for four was soon transformed into 51 for five when off-spinner Glenn Maxwell struck first ball, Richie Berrington chipping tamely to cover.

Left-hander Machan's enterprising 35-ball innings, including six fours, ended when he turned a short ball from Cummins to James Faulkner at long leg.

Scotland were 130 for eight off 25 overs when rain fell and their innings was finished four balls after the resumption, with Davey and Iain Wardlaw (nought) both undone by Starc yorkers.

Australia lost Aaron Finch early in their chase before Clarke and Watson (24) put on 58 for the second wicket.

Watson became Davey's 15th wicket of the World Cup when he top-edged a sweep and was caught by wicket-keeper Matthew Cross.

Clarke's quickfire innings, including seven fours and two sixes, came to end when a pull off Wardlaw was brilliantly caught by the diving Leask, running round the boundary.