When Australia refused to play their match in Sri Lanka during the 1996 World Cup, Sri Lankan skipper Arjuna Ranatunga said he wanted his team to meet Australia in the final. It was as bold a declaration of intent the world has seen in the tournament.

Sri Lanka's Information Minister Dharmasiri Senanayake added further fuel to the fire by saying that Australia’s win over the West Indies in the semi-final gave Sri Lanka an opportunity to “teach a lesson” to Mark Taylor’s Australians. 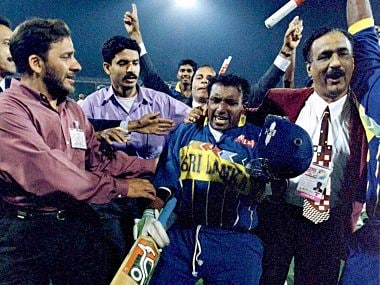 The war of words continued right up to the final. As Ian Chappell recalled for ESPNCricinfo later, "I remember Ravi Shastri had to interview Ranatunga and I had to interview Shane Warne a day before the final. Ravi had done his interview already, and the message must have got through to the Australian camp. Shane Warne had definitely heard it. Because he came over to me, and before we even did the interview, he said, 'What's the fat bastard said about me now?'

"And what Arjuna had said was that Shane Warne was a bit of a media myth, and was not as good a bowler as everyone made him out to be. So here was this Sri Lankan captain really antagonising the Australians, and saying, 'Come on, come on, we want you'."

Now it's all good to talk but one has to be able to back it up with actions. And that is where Ranatunga's trusted lieutenant Aravinda de Silva stepped up time and again during the tournament.

In the semi-final against India, Sri Lanka's first three batsmen scored 1 (Jayasuriya), 0 (Kaluwitharana) and 1 (Gurusinha). The batting conditions weren't ease and the three wickets put them under great pressure. De Silva reacted to that pressure by going on the counterattack. By the time the dust settled -- he had scored 66 off 47 balls including 14 fours. That knocked wrested the initiative back from India and set Sri Lanka on course for the final.

After all the chatter, the pressure on Sri Lanka in the final was immense but once again De Silva showed he knew how to choose his moment.

First with the ball - he knocked the stuffing out of Australia - removing the well-set Mark Taylor (74) and Ricky Ponting (45). Later in the innings, he also claimed Ian Healy's wicket as the Australian innings grinded to a halt at 241-7. De Silva finished with 9-0-42-3.

The total never looked like one that would challenge the Lankans but they lost both openers with just 23 on the board. De Silva first steadied the ship, then set up the victory with a composed 107 from 124 balls. His 125-run stand with Gurusinha pushed Australia back and Ranatunga finished them off. There never was a victory as sweet.

As Wisden later noted: "Another World Cup-winning innings - this time to guide little Sri Lanka tot he pinnacle of one-day cricket. Aravinda de Silva, a delicious pocket battleship of a batsman who could cut or pull bowlers to distraction, dropped anchor in what was ultimately a comfortable victory over Australia, the pre-match favourites. Australia's 241 never looked enough, and once de Silva settled in there was only one winner."

If the semi-final showed us just how De Silva earned the nickname 'Mad Max,' the final showed us how he was so much more than that. De Silva's hundred was the third ton in a World Cup final, after Clive Lloyd's in 1975 and Viv Richards' in 1979 and it was every bit as special as the first two.