World Cup Highlights: Kambli in tears, Eden on fire as India crash out of 1996 World Cup

13th March 1996, Eden Gardens, Calcutta: A dreadful night that no Indian fan will forget, the image of Vinod kambli drenched in tears trudging off the field still haunts us all. 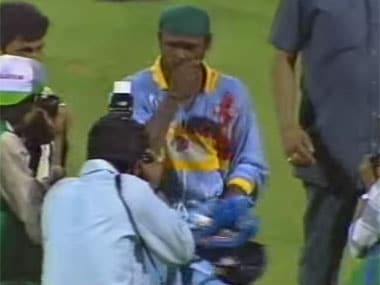 It wasn't meant to end like this. India were one of the favourites to win the 1996 edition of World Cup and just four days ago the entire nation was basking in glory as India had beaten arch-rivals in the quarter-finals. But now, they were all in a state of shock.

India went into the semi-final against Sri Lanka high on confidence having beaten Pakistan in the quarters. At the toss, captain Mohammad Azharuddin surprisingly decided to bat first on a dry pitch, knowing that Sri Lanka were good at chases.

However, when in-form Romesh Kaluwitharana and Sanath Jayasuriya were removed by Javagal Srinath in the first over, his decision seemed to be vindicated. The Lions were soon reduced to 85/4. Their middle order then came to the fore as Aravinda de Silva (66 with 14 fours) and Roshan Mahanama (58 with six fours, retired hurt) hit half centuries as Sri Lanka posted a competitive 251/8.

The target seemed within reach with a strong batting line-up and Sachin Tendulkar in pristine form with two centuries and two fifties in the tournament, including a ton against Sri Lanka in the group stage. He started off well with a cracking cut for a boundary off Pramodya Wickramasinghe in the first over but India suffered an early setback as Navjot Singh Sidhu departed int he second over.

Tendulkar, however, looked in sublime touch as he unfurled fluent drives and powerful cuts. He soon reached his fifty and India seemed on track at 98/1 in the 23rd over before disaster struck.

'Little Kalu' showed good presence of mind to stump Tendulkar for 65 off Jayasuriya. The great Indian collapse soon followed on a crumbling pitch as they lost 7/22. Vinod Kambli strode out to the middle at No.5 but he was just a spectator as he saw his team-mates arrive and depart. He went on the defensive with 10 runs from 29 balls as India were reduced to 120/8 in the 35th over with 132 more required from 15.5 overs.

The fans were getting restless and enraged by the abject surrender, some sections of the Eden Gardens started throwing bottles onto the field. The seats were set on fire. The match was stopped and match referee Clive Lloyd took the teams off for 15 minutes, endless discussions ensued, the players were back on the field but the madness continued. The crowd simply refused to mend it's ways and finally, Lloyd awarded the match to Sri Lanka by default.

The Sri Lankan players set off in celebrations but Kambli couldn't believe it and broke down in tears. He was inconsolable as he walked back to the dressing room. One step away from the World Cup final but the dreams were shattered.

In a interview with DNA in 2011, Kambli confessed that he still cries thinking of that semi-final.

"They keep showing that clipping of me crying. To be honest, tears roll down my cheek even today," Kambli said

"We had played like terrific cricket throughout the tournament. We had beaten Pakistan in the quarterfinal. All seemed well till Sachin was batting. But once we lost him, it was downhill from there. I remember watching five batsmen depart while I was at the crease. Had at least one of them kept me company, we could have made a match of it. I cried because I thought I was robbed of a chance to do it for my country," he added