The ICC World Cup is meant to be the pinnacle of the cricketing calendar.

Once every four years, English colonised nations gather to play an apparently dying form of the game to lift a trophy that can only really be won by maybe three countries out of the 192 on the planet.

With the type of reach that only media geo-blocking can provide, pay television channels all over the globe are showing a marvellous product to perhaps only 25 percent of the people who want to consume it, but can't afford to subscribe.

Most importantly, cricket’s advance in nations such as Germany, Japan and Canada needs to be supported by consistent messaging and positive parlays about the sport of cricket. With four years worth of planning, even Harbhajan's monkey could have ensured the marketing message was clear and easy to sell. 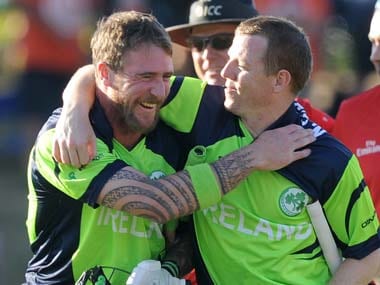 Ireland could make the quarter-finals of the 2015 World Cup. Getty

Well, congratulations ICC. Not only does no one know what message we should be consuming during this World Cup , but you have lost complete control of it.

In 'Corporate Communications 101', you would have graded a score of 'peak arsehattery'.

Every organisation worth its salt knows that controlling the conversation is the most important part of a marketer’s job. It is such a simple concept, that even alleged simpleton Kevin Pietersen understood it. Look at how he used social media, selective silence and his book to decimate an ECB organisation bereft of anything resembling even the basic coherence of a colouring book.

ICC ceo David Richardson has in these last few weeks been on the spruiking tale, attempting to explain to all who will listen that 10 is bigger than 14. Growth of the sport, it appears, is directly linked to shrinking the amount of teams who can compete in it.

"The way we are going, I believe we need to consolidate things to ensure that there is more competition amongst teams at the highest level. If we get a 10-team World Cup, all 10 teams must be capable of winning the tournament"

“There is a little bit of pressure on the likes of Afghanistan, Scotland, UAE in particular to perform well. If not win games then at least be competitive and put in a good account of themselves."

I don't know of one global sporting event where there are 10 entrants capable of winning the grand prize. Not the FIFA World Cup, not the Melbourne Cup, not the FA Cup, not the Superbowl and definitely not a cricketing event.

And, apparently, being noncompetitive is an phenomenon that is only linked to teams that don't play Test cricket. This despite the fact that we are witnessing an ODI tournament which, I am led to believe, is a different form of the game altogether. With Richardson's logic, we would never see nations like The Netherlands represented at the T20 World Cup. Remember them? They beat England at the event last year.

Plenty has been written elsewhere about the ridiculous nature of this argument and its inherent buffoonery. There is even an online petition that has more signatories on it than Sachin Tendulkar has Test runs.

Of particular note is the groundswell of anger surfacing strongly against something that is planned in four years time. How can that even happen?

The ICC, or rather BCCI, ECB and Cricket Australia, the trio that now controls the ICC, would prefer that we all spoke glowingly about how amazing the opening ceremony was, how affordable the ticket prices are, how bountiful the access to the digital feeds are, and most importantly, what is happening on the field.

But we are not.

The most passionate debate, the debate that has all cricket fans united, is the one that says that cricket must avail the World Cup to others.

Zimbabwe, Bangladesh and Sri Lanka are only Test playing nations because at some stage, the ICC decided it wise to grow the game in those markets. I would be labelled a raging leftist conspirator if I dared suggest we support the growth of the game in places like China, Russia, Brazil or the USA.

Who needs another market of a billion or so when we have India? What good could possibly come from that (aside from protecting the BCCI’s turf, which seems to be the point)?

Those speaking out against the lunacy of the ICC's plans include former and current national captains, commentators, mainstream writers and even the New York Times. Actually, it is easier to list those that have not spoken out. The list includes David Richardson, the ICC executive board and perhaps my wife. She's not really a cricket fan, but I'll check her Facebook feed after finishing this article just to be sure.

In this World Cup, social media has been dominated initially with messages of love for occurings such as yet another Sangakkara hundred or Afghanistan's first win. However, like clockwork, the missive and debate shifts to outpourings of anger, destitution, bewilderment and angst.

Enjoy what you see this tournament of Scotland, UAE, Ireland and Afghanistan. The way it sits at present, you may never see them at a World Cup again.

The ICC and the nation's boards should be the custodians of the game. They do not own cricket.

We want to be talking about the cricket. Instead, we are talking about administrative failings. I've seen press releases about the success of North Korean missile launches that have more cut through than anything the ICC is dishing up at present.

The world's second biggest sport has lost control of the conversation.

Not because others are louder or have a better platform in which to launch their message.

They have lost control of the conversation because their message of destruction has been flatly rejected by the cricket populous.