The four week long group stage of the 2015 World Cup is finally over. While there have been a substantial number of one-sided games, there have also been sublime batting masterclasses, outrageous bowling displays, jaw-dropping batting collapses, and of course, England getting knocked out before the quarter-finals.

At Firstpost, we look back at the defining performances for each team. First up, Pool A.

“Four from four... He's picked him up to the leg side... Those are the winning runs. Shapoor is the hero... for Afghanistan” an excited Alan Wilkins said on air.

It was a first victory for the World Cup debutants and Shapoor Zadran made sure it would be an unforgettable moment. He set off for the single initially, then realized a few steps later that the ball had gone to the boundary and a life long dream had become reality. He broke to the right, took his helmet off, struck his signature airplane pose then slid down on the ground and fell face first in exhaustion and elation. 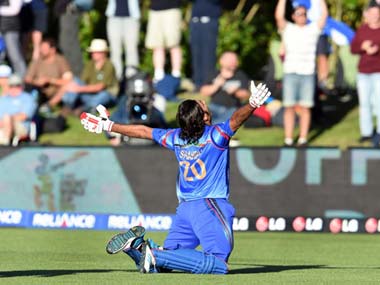 Afghanistan’s improbable cricket story had a brilliant exclamation mark added to it.

The most inspirational moment of the World Cup, however, was also the most heart-wrenching as Scotland, once in a seemingly unassailable position, had their first World Cup win snatched away. Sport is inspirational. Sport is cruel.

Mitchell Starc did his best Wasim Akram impression at the Eden Park, hurling down one thunderbolt after another at terrified New Zealand batsmen.

In defense of a meagre 151, Starc single-handedly almost pulled the rug from under New Zealand's feet with his in-swinging yorkers that smashed stumps and New Zealand’s confidence. Twice, he was on a hat-trick. Unfortunately, for Australia, he had two deliveries at Trent Boult to finish off the demolition job but it wasn't to be.

Starc finished with 6 for 28 from nine overs and the match set him on the way to become the leading wicket taker in the group stage with an unreal average of 8.50 at an unimaginable strike rate of 13.8. Even Akram never did that.

Bangladesh had England on the ropes. If they won, England were out of the tournament. It was a huge moment, the kind Bangladesh normally don’t seize.
Enter Rubel Hussain. With quick, accurate fast bowling, he quickly erased the memory of a dropped dolly by Tamim Iqbal in his last over and demolished the stumps of Stuart Broad and Jimmy Anderson, and the dreams of every English fan.

The pile of Bangladeshi players that instantaneously materialized on the ground showed how important this win was to them. For the first time, Bangladesh were in the knockout stages of a World cup.

England’s defeat by Bangladesh was the nadir of an abysmal World Cup campaign. But the gulf between England and the best teams was exposed in their second game. Tim Southee swung the ball right and left, in and out, and all around the dizzied Englishmen at the “Cake Tin” to take 7 for 33 and bowl England out for 123.

They were further humiliated as New Zealand knocked off the runs in under 13 overs. With 226 balls remaining, it was England's heaviest ODI defeat. Rubel would simply finish the job that Southee started.

The litmus test of New Zealand’s battle readiness was always going to be the early pool match versus their trans-Tasman rival Australia. After Trent Boult had set the ball rolling with a spectacular spell of swing bowling, it was up to the batsmen to bring the game home but as one Kiwi fan said, “You never know with the Aussies. It isn't over till the last ball is bowled or the last run is scored.”

And it did come to the last run scored. As Starc ran riot, the calm Kane Williamson was nudging New Zealand ever so closer and with the first opportunity to seal the game, he stepped down the wicket to loft Pat Cummins – all 145k's of him – over long on for a six.
With that, Eden Park erupted and the entire country exhaled a collective sigh of relief.

Rank outsiders in Pool A, Scotland came close to winning their first World Cup game but were let down by inexperience in crucial moments. They came within a whisker of registering probably the biggest upset ever in a World Cup when they had hosts New Zealand seven wickets down chasing 143. A minor miracle was needed but it wasn't to be as Dan Vettori survived a flash over slips.

This World Cup is the one-day swansong for two of Sri Lanka's greatest cricketers – Mahela Jayawardene and Kumar Sangakkara. The regal Sangakkara has decided to leave a potentially indelible mark on the record books, as he carries his team to the quarter-finals.

With four centuries on the trot (vs Bangladesh, England, Australia and Scotland), Sangakkara has become the most prolific centurion in a single World Cup. In the modern era, where aggressive bashers and innovative risk takers have begun to rule the roost, the serene copy book technique of Sangakkara has been a treat to watch.