With a little faith, Marcus Rashford can emulate Owen, Rooney for England at Euro 2016

When Marcus Rashford made his debut for Manchester United in the Europa League Round-of-32 second leg clash against Danish club FC Midtjylland, it was mostly because of desperation. Manchester United were trailing 2-1, with no forwards fit enough to play the return leg. Anthony Martial and Will Keane were both out because of injuries. Louis van Gaal had no other option but to field an 18-year-old kid in a do-or-die game on a European night. Good thing he did.

Since that incredible debut at Old Trafford where he scored twice to spare United's blushes, Rashford has come a long way. He has scored eight times in 18 appearances for United. But, had anyone told him a few months ago he'd be making the England squad for Euro 2016, Rashford would have laughed it off. 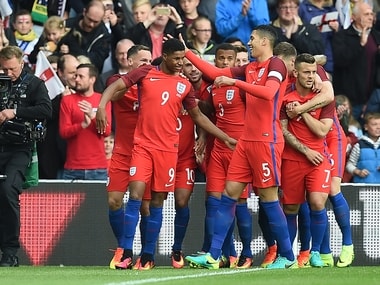 Marcus Rashford scored on his debut for England against Australia in a friendly. AFP

On 16 May, England manager Roy Hodgson named Rashford in the 26-man provisional squad for the European Championships. On 27 May, Rashford scored with his first ever shot for the England senior side on his debut just three minutes into the game to help England beat Australia 2-1. On 31 May, Hodgson confirmed Rashford will be spending his summer in France. On the deadline day for announcing final squads for the Euros, Rashford was one of 23 selected to represent England.

Ahead of a major international competition, Rashford is presented with an opportunity the likes of Michael Owen, Wayne Rooney and Theo Walcott once got. Owen was 18 as well when, on the back of England Under-20 performances at the 1997 Fifa World Youth Championship, he was given his senior team debut in a friendly against Chile in February 1998.

There was much chatter around him and, much like Rashford, he was a public darling. The media loved him and everyone wanted him to make it to the England squad for the 1998 World Cup in France. He then scored his first goal for England in a  pre-World Cup friendly against Morocco, becoming the youngest ever player to score for the country in the process. In the summer, he was on the plane to France.

After coming on as a substitute against Tunisia in the group stage for his first World Cup appearance, he was again used off the bench against Romania. He scored England's solitary goal in the 2-1 loss, becoming the youngest English goalscorer in World Cup. Glenn Hoddle, England manager at the time, was impressed and he handed Owen a start in a crucial 2-0 win against Colombia. England advanced to the the knockout stages and was to face bitter rivals Argentina. Hoddle started Owen again and the rest is history.

After Argentina had taken an early lead from the spot through Gabriel Batistuta, Owen earned England a penalty of their own when Roberto Ayala fouled him in the box. Alan Shearer converted the spot kick and brought the Three Lions back on level terms. Then in the sixteenth minute, Owen ran through the spine of Argentina's half of the field, leaving Ayala and José Chamot in his wake, cut to his right at the edge of the box, and shot across past goalkeeper Carlos Roa to hand England the lead.

It was a sensational goal, one that went down in English football folklore and popular culture. People still discuss it in bars and pubs across England. The goal almost became synonymous for arriving at a big stage, and it was voted as the third greatest England goal of all time in 2013.

England, reduced to ten men in the game after David Beckham was shown the red card early in the second half for a silly kick-out at the Argentine captain Diego Simeone, went on lose 4-3 on penalties. But Owen, armed with a pre-pubescent face and a penchant for goals, had arrived.

In February 2003, a certain Wayne Rooney, all of 17, appeared in a friendly loss to Australia to become the youngest player to play for England (a record since broken by Theo Walcott). Six months later, Rooney broke Owen's record to become the youngest English goalscorer when he put himself on the scoresheet against Macedonia in a Euro 2004 qualifier. Eight months later, he was on the plane to Portugal for the Euros.

In Portugal, Rooney, playing in his first major tournament for the national team scored four goals in four games, including a brace against Switzerland, to help England reach the quarterfinals of the European Championships. Rooney's emphatic run in the tournament came to an agonising end as he limped off the ground with a broken metatarsal after just 27 minutes against hosts Portugal. England, in the end, were vanquished by their age-old nemesis — penalty shootouts — but yet again had gained a star in the making.

Rashford, with eight goals for Manchester United and one for England in his kitty already, now stands at a crucial juncture. He could either go on to replicate Owen and Rooney or become World Cup 2006's Theo Walcott.

A 17-year-old Walcott, who had not played a single Premier League game, was named in Sven-Goran Ericksson's England squad for the 2006 World Cup in Germany. He didn't see a single minute of competitive action in the tournament. Clearly Ericksson didn't have much faith in him once the tournament began.

The England coaching staff reportedly said that "Walcott looked out of his depth on the German training ground and would have to confine himself to note-taking and consoling days out with his parents". Ericksson had admitted before the World Cup that he had selected the teenager despite never having seen him play a single match. Was there any other outcome possible?

Walcott, following his teenage turn-up at a World Cup, has seen his fortunes take a dip for the national side. Courting injuries and inconsistency throughout his career, he was left out of 2010 World Cup squad by then England manager Fabio Capello. Four years later, with the 2014 World Cup on the horizon, an in-form Walcott suffered a knee injury during a 2-0 win against Tottenham Hotspur and did not make the squad heading for Brazil. On Tuesday, the Arsenal forward, struggling with his poor form, was ignored by Hodgson as well for the upcoming Euros as well. He is yet to play in a World Cup for England.

But with Rashford, Hodgson must learn from the past. If he has showed faith in the Manchester United striker before the Euros, he must show faith in him during the competition too. Hoddle and Ericksson had believed in Owen and Rooney and it paid dividends. They went on to light up the tournament and later became all-time great goalscorers for England. And there is no reason why Rashford can't do the same.