Wimbledon 2017: With 19th Grand Slam at 35, Roger Federer's longevity makes him the greatest of all time

In 2003, a 21-year-old player from Switzerland sporting a ponytail and a wispy beard won the Wimbledon title for the first time in his career. 14 years later, Roger Federer is still winning Wimbledon titles.

Back in 2003, Federer defeated Mark Philippoussis in the final and won the title for the loss of just one set in the tournament — to Mardy Fish in the third round. In 2017, a few days shy of his 36th birthday, Federer won the title for a record eighth time without dropping a single set. 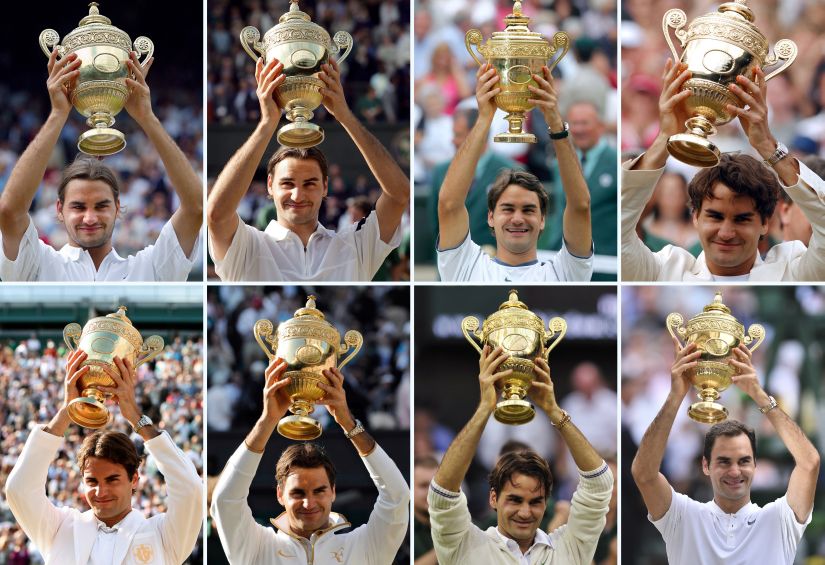 Roger Federer holding up the Wimbledon Championships trophy on the eight occasions that he has won it. Reuters

Gifted, artistic, sublime — these are some of the words that instantly come to mind when you think of Federer. The Swiss ace's career has been based on his classy and elegant style of tennis. His movement has been compared to that of a ballet dancer's, his strokeplay to that of a an artist painting a blank canvas. American writer David Foster Wallace famously called watching Federer playing tennis a religious experience, describing his forehand as “a great liquid whip” and the man himself as “a creature whose body is both flesh and, somehow, light”.

It was this majestic talent that helped Federer scale the highest summits in the sport and complete his haul of 17 Grand Slam titles in 2012. By defeating home favourite Andy Murray in a rain-interrupted final five years ago, he matched big-serving 'Pistol' Pete Sampras and 19th-century player William Renshaw for seven Wimbledon titles. However, from 2013 to 2016, Federer reached only three finals at Majors and suffered five heartbreaking losses in the semi-finals.

This year, Federer has undergone an astonishing renaissance, a revival bordering on the miraculous. And there is another word that is now uncharacteristically associated with his success — pragmatic. Federer realised that he needed to change the way he approached the sport to extend his career in it.

Last season saw Federer go under the knife for the first time — after a knee injury he sustained while running a bath for his twin daughters. Surgery for his torn meniscus meant that he spent a month on the sidelines after the Australian Open. He returned for the clay season at Monte Carlo, and played Rome as well.

However, it was at French Open that Federer made one of the most difficult decisions of his life — a decision that would eventually help shape his resurrection seven months later. Federer decided to skip the French Open. He had appeared in a record 65 consecutive Grand Slam tournaments, but he chose to prioritise his health over a record.

Federer revealed the conversation he had with his fitness coach Pierre Paganini that helped him make the career-defining choice. "I went there (Paris) and I was doing fitness with my fitness coach. After like 10 minutes, I looked at him and said, 'I don't know what we're doing in Paris seriously. My knee is swollen. I don't feel ready to go. It's maybe the toughest tournament out there. My back is funny. My knee is not well. What are we doing?'

"As a team, we just decided that it's best to skip it. So it wasn't should I or shouldn't I. The body didn't really allow me to play, in my opinion.

"It was hard. The first moment I felt relieved taking the decision. Then when it went official, people knew around the world I was not going to play in Paris, I got a little sad, I must admit, because I felt like it was a great record for me to keep going, 65 Slams in a row. But health is so much more important than trying to hang onto some sort of a record," Federer told reporters at Wimbledon.

After skipping Roland Garros, Federer played the grass-court season which ended with a painful defeat at the hands of Milos Raonic in a five-set thriller at the semi-final stage. And then he did something that was almost unimaginable for the then World No 3 — he announced he was going to shut his season down and spend six months away from the sport.

The announcement was followed by the overreaction that is expected from the clicks-driven media, with many critics quick to announce his end. Just to refresh your memory, here's a look at what some of the news outlets said: "Is this the end for Roger Federer?" screamed a Fox Sports headline. "Why Roger Federer will never win another Grand Slam," proclaimed The Telegraph.

For Federer, though, this was all a part of a plan. A plan to rehabilitate, rest and return to tennis stronger. And he did just that in 2017. Federer took the tennis world by storm, winning his 18th Grand Slam with a sweet victory over long-time rival Nadal in the final of Australian Open. He went to win the 'Sunshine Double' and lost just one match in the first quarter of the season. He even achieved something he had never managed in his career before — beat Nadal two more times for four straight victories.

Here's another word that you generally would't associate with Federer — prudent. But that's exactly what the 35-year-old has become. He is well aware of the tribulations of ticking time, and decided to limit his tournaments to save himself for the ones that really matter.

“I will probably never be able to play 27 tournaments a year anymore. We know that all. But maybe instead of playing 22 you play 18, instead of 20 you play 17. That could totally happen. You always need the right balance, I feel like, enough practice, enough matches, enough time off. I guess as you get older, everything becomes a bit different,” he said in Melbourne.

And it was with this strategy that he once again made a risky call — he decided to forgo the clay-court season altogether in 2017. Instead of toiling on dirt over a soul-sapping six weeks, he played a couple of exhibition matches for charity, hung out with Bill Clinton and then returned to his Dubai residence to practice. While Nadal romped to a record 10th Roland Garros title, Federer was preparing himself for the tournament he treasures the most — The Championships, Wimbledon.

While tennis experts and pundits once again critiqued his decision back then, Federer's move in hindsight turned out to be a masterstroke. He may have been rusty at Stuttgart, losing to Tommy Haas in his opening round for his second defeat of the season, but by the time he stepped on the pristine green courts of Halle, he was up and running on full throttle.

He went on to win 29 consecutive sets that helped him clinch his ninth title at the German city and his eighth crown at Wimbledon. He joined Bjorn Borg (1976) as the only men in the Open era to win Wimbledon without losing a set.

While his peers Andy Murray and Novak Djokovic succumbed to their physically-failing bodies, Federer waltzed through the tournament and won the final against a compromised Marin Cilic at the loss of just eight games. With 19 Grand Slams, Federer stands tall over all his competitors and is in no mood to stop.

To win using your talent makes you a champion; to maximise your potential the way Federer has is what makes him a legend. Odes have been written about Federer's exquisite style, his gifted forehand and his graceful movement; this is an article in appreciation of Federer's longevity. The 35-year-old could have hung up his racquet and walked away from the sport long ago with plenty of records and accolades to his name. But the fact that he still has the desire to play and the wherewithal to win, puts him above every other champion who has graced this sport.

Jimmy Connors and Ken Rosewall were two players who competed well into their late 30s. But their era was never as physical, the tennis not as grinding, and the schedule not as brutal as Federer's epoch of dominance. If Federer goes on, he could come close to Connors in terms of matches played (and won).

When asked what still keeps him going, Federer said, "I love to play. (I have a) wonderful team. My wife's totally fine with me still playing. She's my number one supporter. She's amazing. I love playing the big stages still. I don't mind the practice. I don't mind the travel. The goal is definitely to be here (Wimbledon) again next year to try and defend."

With his new pragmatic approach and a healthy body, trust Federer to keep his word and be back for more in 2018.