As tennis turns to Wimbledon, there's been a bit of a throwback feel to this Grand Slam season so far.

At the year's first major tournament, the Australian Open in January, Roger Federer beat Rafael Nadal for the men's title, and Serena Williams defeated her sister, Venus, for the women's title. 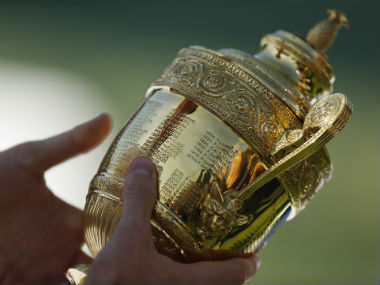 Matchups from a decade ago or more, right?

And now, when play begins at the All England Club, so many of the key story lines will involve those same four players: Federer and Nadal because of their recent resurgence; Serena because of her absence (she's expecting a baby in September); Venus because she is one of only two past champions in the women's draw.

Here is what to watch on the grass courts of the year's third Grand Slam tournament, which starts Monday:

Federer the favourite, Nadal goes from clay to grass

Wasn't all that long ago that folks were figuring Federer's best days were long behind him. He hadn't won a Grand Slam title since 2012, and as he entered his mid-30s, he was missing Grand Slam tournaments for the first time in more than 15 years because of injury. And now? He extended his record with an 18th major championship in Australia, opened the year 19-1, took some time off and then won a grass title at Halle, Germany. With defending champion Andy Murray off-form this season, Federer is a popular pick to win Wimbledon for what would be a record eighth time.

There was a time that Nadal excelled on any surface, winning Wimbledon twice and reaching the final on three other occasions while marching his way toward 10 French Open titles and completing a career Grand Slam, too. But then his knees became a real problem on grass and he not only started losing early at the All England Club, he started losing to players ranked 100th or worse. "When Rafael is good with his knees," said Nadal's uncle and coach, Toni, "he can play well on the grass."

Novak Djokovic has won three Wimbledon titles and normally would be considered a real likely candidate for a fourth, but he has not played up to his usual standards over the past year. He went from winning four consecutive Grand Slam titles, something no man had done in nearly a half-century, to failing to defend any of those championships; he lost in the third round at Wimbledon in 2016. He tried to look on the bright side recently, saying: "It is liberating a bit. I was very fortunate and privileged to have so much success in the last eight, nine years, and kind of entered most of the tournaments as one of the biggest favourites. So for a change, it's good to not be one of the top favourites. It releases a bit of the pressure."

Not only is seven-time Wimbledon champion Serena absent, but so is 2004 champ Maria Sharapova, who was forced to sit out last year's tournament during a 15-month doping ban. She would have needed to qualify this time around but is now sidelined by a left thigh injury. Their absences lend the same sort of wide-open feel to the women's draw that the French Open had.

All eyes on Venus Williams and Petra Kvitova

The two past winners in the women's field are Venus, a five-time champion, and Petra Kvitova, a two-time champ. Both will get plenty of attention, for very different, non-tennis reasons. Venus was sued Friday by the estate of a Florida man who died after a car crash police say she caused. The lawsuit came one day after Palm Beach Gardens police released a report saying Venus caused the 9 June crash that left the man with a fractured spine and numerous internal injuries (he died 22 June).

Kvitova, meanwhile, was attacked by a knife-wielding intruder at her home in the Czech Republic in December. Kvitova wound up with cuts to her left hand — the one she uses to swing a racket — and needed surgery. Wimbledon will be the third tournament of her comeback; she won the second, last week on grass. Another two-time major champion to keep an eye on: former No 1 Victoria Azarenka. This will be her first Grand Slam tournament in more than a year; she returned to the tour in June after giving birth to a son.

Click here to read our predictions for an unpredictable and intriguing women's draw at the Wimbledon.

After coming out of nowhere to win the French Open, what will Jelena Ostapenko do for an encore? She arrived in Paris unseeded, ranked only 47th and without a title of any sort on tour, then used a fearless brand of high-risk tennis to win the championship. Now there are new expectations, and no opponent will overlook her, but consider this: Grass is her favourite surface; she was the junior champion at Wimbledon in 2014.

No 1 spot up for grabs

Both Murray and women's No 1 Angelique Kerber could lose their spots atop the rankings after the tournament. Murray, Djokovic, Nadal or Stan Wawrinka could all leave the All England Club with the top spot. Kerber is one of several women who could be No 1 on 17 July; among the others are Karolina Pliskova and Simona Halep.

Venue: The All England Lawn Tennis and Croquet Club

Schedule: Main-draw play begins on Monday. The 14-day tournament closes with the women's singles final 15 July, and the men's singles final 16 July. There are no matches scheduled for the two-week tournament's middle Sunday, 9 July. Click here to find out where you can catch the action live.

Prize money: Total is £31.6 million, with £2.2 million each to the men's and women's singles champions. Think you know Wimbledon? Try this exhaustive trivia quiz that will test your knowledge to the fullest

Here's a look at the main contenders for the men's title: 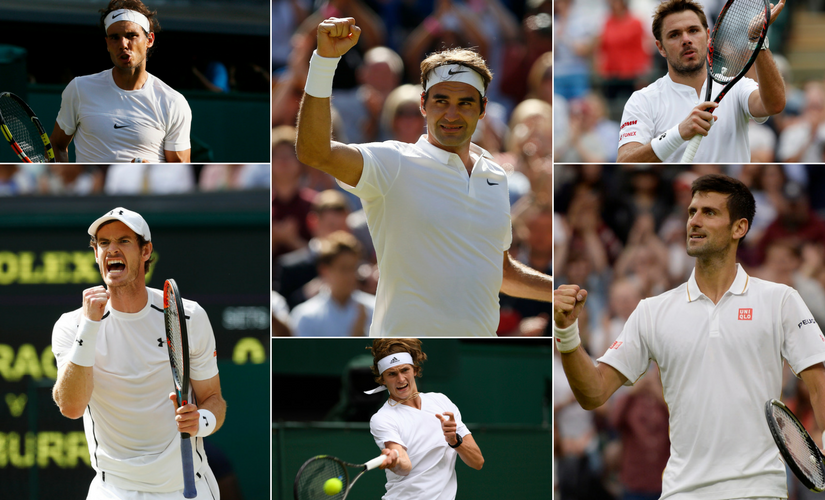 The main contenders for the title in the men's draw. Reuters

After run to French Open semi-finals, Murray lost the opener at Queen's Club grass-court tuneup, then he withdrew from exhibition matches in England, citing a sore left hip. The Brit then made at least to the quarter-finals in each of last nine appearances at All England Club. Murray's comfort level, and crowd support, at Wimbledon are both so strong that he can't be ruled out as a serious title contender.

After losing in French Open quarter-finals, the Serbian ace entered grass-court tuneup for the first time since 2010 — and won the title at Eastbourne on Saturday. The 2016 French Open made him first man since Rod Laver in 1969 with four consecutive major championships but failed to defend any of those titles. Djokovic's once-impervious aura has disappeared. Will unusual part-time coaching arrangement with Andre Agassi pay more dividends in London than it did in Paris? Djokovic also has added former player Mario Ancic to his team.

After skipping the clay-court season, then losing the first match on grass, Federer looked back at his best in the winning title at Halle, Germany. The 35-year-old seeks a record-breaking eighth Wimbledon men's title. One cannot simply count Federer out, as his Australian Open championship in January proved after missing last half of 2016. Time off does him good, clearly.

Enters Wimbledon on a three-week break from competition since winning record 10th French Open title. Has won a total of five Wimbledon matches over past five years. One of his coaches, Carlos Moya, is taking a break and is not at Wimbledon. If his knees hold up, could return to the form that carried him to the final in five consecutive appearances, including two trophies, from 2006-11. "My legs are fine," Nadal said Saturday. "My week of training has been positive."

A Wimbledon championship would make him the ninth man with a career Grand Slam, although he insisted Saturday: "For me, it's not something I think about." After a good run to Roland Garros final, the 32-year-old Swiss lost opener on grass at Queen's Club. However, Wawrinka has never past quarterfinals at Wimbledon in 12 appearances, needs to stick to an attacking style to try to make a breakthrough.

Surprisingly, Raonic is one of four men with 400 aces this season. His first major semi-final and final appearances came at Wimbledon. Big serve carried him to 2016 final and could bring him far again — as long as his body holds up.

Recently, the German ace made a top-10 ranking debut. Slid out after first-round French Open exit. By reaching final at grass tuneup, showed his game translates to the slick surface. Now needs to get to the second week of a major.

Here's a look at the main contenders for the women's title: The main contenders for the title in the women's draw. Reuters

Kerber is still trying to find her way in 2017 after reaching her first three major finals last season, including at the All England Club. She is 0-8 vs top-20 opponents this year, after going 24-9 last year. Could lose No 1 ranking after Wimbledon. She became the first woman seeded No 1 to lose in the French Open's first round in the professional era, emblematic of a real step back this season.

Pliskova leads WTA in aces this season (her twin sister, Kristyna, ranks second). Her record at Wimbledon 4-5 (win-loss) but the surface should suit her game this year. Moreover, she has a chance to reach No 1 for the first time. With a terrific serve, and confidence from winning title at Eastbourne on grass, could be ready for a strong showing at Wimbledon. Victory over Serena in the US Open semi-final last year showed what sort of potential Pliskova has.

Venus was sued on Friday by the estate of a Florida man who died after a car crash police say Williams caused. A day earlier, police released a report saying Williams caused the 9 June crash that left the man with a fractured spine and numerous internal injuries. He died on 22 June.

She has shown that she's still got the game by reaching semi-finals at All England Club last year for the first time since 2008, then getting to Australian Open final in January.

Wimbledon is the third tournament of a comeback after getting cut by a knife-wielding intruder at her home in December. Many consider her the favourite for what would be her third Wimbledon title. The best news, though, is simply that she is back in competition.

Ostapenko surprised everyone, including herself, by winning first career tour-level title at French Open earlier this year. Not to forget, she is the 2014 junior Wimbledon champion. With big strokes and confidence to spare, no reason she can't go far. After all, grass — not clay — is her favourite surface.

Muguruza reached her first major final at Wimbledon in 2015; the next year, won the first major title at French Open. She has struggled all season and does not look ready to contend at the All England Club. In the most recent match, lost 6-1, 6-0 on grass at Eastbourne.

Azarenka recently returned to the tour after giving birth to a son. Wimbledon will be her second tournament back and first Grand Slam event in more than a year. She enters Wimbledon via a protected ranking. She's twice made the semifinals at Wimbledon and has the muscle memory of two runs to Grand Slam titles. Has missed the past four majors, though, so there is accumulated rust. Still, she said Saturday that she thinks she eventually can "play better than I ever (did) before."