London: Top seed Angelique Kerber was knocked out of the last-16 of Wimbledon by Garbine Muguruza on Monday, ensuring she will lose her World No 1 ranking.

Muguruza's 4-6 6-4 6-4 victory marked the ninth consecutive time Kerber has failed to beat a top-20 opponent. She last achieved that feat in 2016 and she has now been beaten by Muguruza in five straight matches.

Romanian Simona Halep could take the World No 1 crown, if she can reach the semi-finals at Wimbledon. Halep beat Victoria Azarenka to progress to the quarter-finals on Monday. 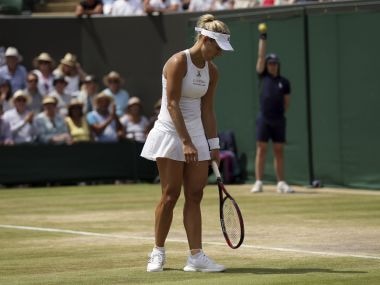 Angelique Kerber reacts after missing a shot as she plays Garbine Muguruza during their fourth round match on day 7 at Wimbledon. AP

Should Halep fail to advance to the semis then Czech Karolina Pliskova will take over at No 1 when next week's rankings are announced.

But there was a bitter irony for Kerber who, despite being somewhat hampered by her left knee, produced her best display in months yet bids farewell to Wimbledon and her status as the world's best.

Monday's match was always destined to be close, pitting 2016 runner-up Kerber against her 2015 equivalent and there was little to choose between the pair in what was a high quality contest on Court Two.

Kerber broke to go 5-4 up in the first set, when at the end of a fierce rally her Spanish opponent went wide and allowed the German to serve out, securing the set with an emphatic smash.

The second set was on-serve until, with Kerber serving at 5-4 down, the tall Muguruza, who had saved three break points in the set, broke to secure it with a fine crosscourt winner.

It was just reward for Muguruza's attacking and positive play and was warmly appreciated by temporary coach Conchita Martinez, Wimbledon champion in 1994.

Kerber's left knee, which she appeared to hurt in the first set, was reducing her push-off on serve with the consequent impact on her speed but the third set became a battle of nerves and stamina in the early afternoon heat.

The German broke in the first game and led 2-0 but both were struggling to hold serve and it was soon 3-3 with two breaks each.

In an epic 10-minute game, Muguruza held for 4-3 with the crowd appreciating some hugely entertaining rallies between the determined pair.

Two games later Kerber dealt with two match-point threats, but Muguruza grabbed the third to book her place in the last eight.

Muguruza will next face Russia's Svetlana Kuznetsova after the seventh seed beat Agnieszka Radwanska 6-2 6-4 in the last 16.