An ode to Viru: Sehwag was a creature of evolution, not revolution

Let's get this out of the way early.

Virender Sehwag was an absolute star. That guy who dragged people through the turnstiles.

For Viru, every ball was a bad ball.

He swung harder than a Canadian lumberjack. He had more power than Vladimir Putin. Chuck Norris wouldn't have wanted to bowl to him. Boundary ropes jumped out of the way of his shots, they were hit that hard.

He has now decided to retire on his terms. Well, kind of.

International scorecards haven't seen his name in ink since early 2013. 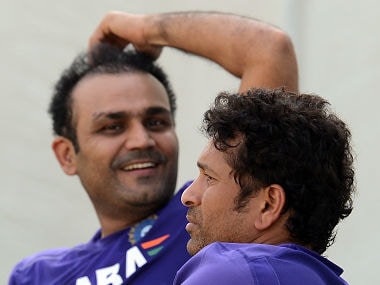 The truth is that he was already retired. But who doesn't want to make an announcement so that flowery articles and tribute videos can be made about you?

I'm planning my retirement from cricket writing as we speak. Have your pen ready Gideon Haigh.

One way to judge the relative merits of a cricketer is the impact they had on how the sport is played. In this sense, Sehwag is ahead of Sachin Tendulkar, Brian Lara and Ricky Ponting.

He is more Gilchrist or Shane Warne.

For these guys redefined their roles.

Yes, we had seen wicket keeper batsman previously, but none who averaged 50 in Test match cricket or had the ability to turn a match in an hour at the crease. He could catch the ball too. Standing up the Shane Warne couldn't have been the easiest thing in the world.

Because of Gilchrist, we got MS Dhoni and Brendon McCullum.

We thought Gilly was revolution. At the time he was. However, history now shows him to be simply evolution. That water creature that walked on land and lost its gills.

Sehwag is the same. In the Test arena, he took what Chris Gayle took from Michael Slater who took from Gordon Greenidge and Desmond Haynes. He scored faster. He played shots earlier. He took risks. He swung. Hard. Really hard.

Cricket is now more than comfortable with the up and down nature of the Kaboom kid. Without Sehwag, perhaps we wouldn't be?

But it wasn't just the Test arena where Viru represented evolution.

The ODI game first saw attacking openers on a consistent basis at the 1996 World Cup. Those tiny Sri Lankans daring to make more than 60 from the first 15 overs. They wanted 90 and they went after it. Sehwag benefited from that. Tillakaratne Dilshan as well. Today, those winners are Quinton de Kock, McCullum and Aaron Finch.

Without guys like Sehwag demonstrating what flair with the bat really meant, T20 may not have been born.

The Netherlands would never have had the chance to defeat England in a World Cup match. The IPL wouldn't have kicked started the global phenomenon of the renegade short form player. TV revenues wouldn't be up. Sliced bread wouldn't have been invented. We would all still be riding horses to work. That Crazy Frog ringtone would simply be an idea in some Swedish guys head.

Viru was evolution. A crucial step. A bridge.

Who will be the next link in the evolutionary batting chain?

Cricket will continue to ebb and morph.