Kingston: It was business as usual for Usain Bolt as he easily qualified for the semi-finals of the men's 100 meters Thursday at the Jamaican Olympic Trials at Kingston's National Stadium.

Bolt, who will be seeking a third-straight triple-triple -- gold medals in the 100m, 200m and 4x100m relays -- hardly worked up a sweat as he won his second round heat in a pedestrian 10.15 seconds. 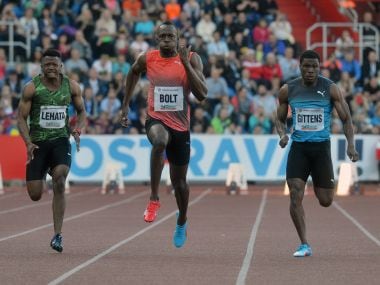 There were no surprises in either of the men’s or women’s 100m heats with all the big names advancing to set up what promises to be an explosive Friday evening, when the semis and finals are set to run.

The only mild surprise was former world record holder Asafa Powell finishing third in his heat in 10.17 seconds behind 20-year old Jevaughn Minzie (10.15) and Senoj-Jay Givans, who clocked 10.16.

Yohan Blake, who complained that his blocks slipped at the start, was an easy winner in his heat at 10.26.

Nickel Ashmeade won his heat in the fastest time of the night 10.07, ahead of 200m specialist Warren Weir, who finished in 10.17.

Shelly-Ann Fraser-Pryce cruised in her 100m heat to an easy win in 11.38 seconds to beat former NCAA champion Remona Burchell (11.59).

Simone Facey won her heat in 11.31 ahead of the veteran Kerron Stewart 11.44, but it was 21-year old Christania Williams trying to make her first senior team who had the fastest time of the night running 11.20.

NCAA triple jump champion Clive Pullen, a senior at the University of Arkansas, jumped a personal best 16.90 meters to qualify for the Olympic Games, winning the event.

There was one disappointment as 400 meter runner Janieve Russell was a no-show due to an injury.

Garth Gayle, general secretary of the Jamaican Athletics Administrative Association, said she had requested a medical exemption that would allow her to make the team if she can prove her fitness in time for the start of the Rio Olympics.