Semi-finals report: Shuttlers Parupalli Kashyap and HS Prannoy made it an all-Indian men's singles final, while the men's doubles pair of Manu Attri and B. Sumeeth Reddy lost in the semi-finals of the US Open Grand Prix Gold. 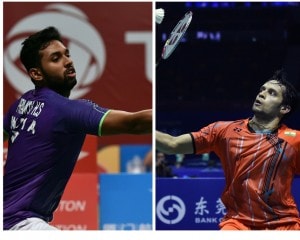 HS Prannoy and Parupalli Kashyap are slated to face each other on Sunday. AFP

Second seeded Prannoy on Friday got the better of Vietnamese 15th seed Tien Minh Nguyen 21-14, 21-19 in 40 minutes in the second semi-final.

In the international circuit, Kashyap and World No 23 Prannoy have only met twice, with each winning a game.

The first game between them took place in 2010 Indian Grand Prix where Kashyap won. In the next one, at German Open 2014, Prannoy triumphed.