Poor surf conditions at the regular Snapper Rocks venue on the Gold Coast meant officials moved the first day of competition around the point to nearby Duranbah. 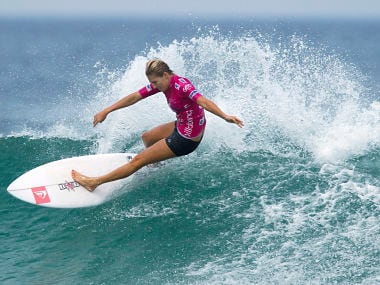 The Quiksilver Pro and Boost Mobile Pro are the first elite events where men and women will receive equal prize money.

For surfers like Gilmore, who can earn a spot at the Tokyo Olympics by finishing in the top eight at the end of the WSL season, 2019 presents some unique opportunities for pay parity and Olympic inclusion.

"I've never been driven by money to win, but I've come to understand the sport has a real power to speak to people on a whole other level," Gilmore said ahead of the season-opening event at her local break. "To set standards and send messages in society that not many other industries have... it just seemed like such a milestone year and it made me fall back in love with being the world champion and reminding me why I do this."

Becoming an Olympian would be an added bonus.

"I always loved the idea of going to the Olympics (but) never thought I'd get the chance," she said.

In men's first-round heats on Wednesday, Wilson and Slater finished last in their respective three-man heats, forcing both into elimination heats in the second round. Medina advanced directly to the third round with a win in his opening heat, and producing the highest-scoring wave of the day. Under the new men's format, first- and second-place finishers in the opening heats go directly to the third round. Third place goes into a second round, where the last surfer in each heat is eliminated. From the third-round onward, it's single elimination head-to-head competition.

Slater, coming off an injury-shortened 2018 because of a broken right foot, said he doesn't feel a 12th world title is out of the question for him.

"I was really burned out when I got injured last year, so it was sort of a good time to recharge," Slater said. "I know where the level's at ... I don't think that it's unattainable."

The Olympic event in Tokyo next year will be held at Shidashita Beach, otherwise known Shida, which is about 60 kilometers (40 miles) outside the Japanese capital in the Chiba prefecture.

The Olympic fields will feature 20 men and 20 women. It is possible that if surfing is extended to the Paris Games in 2024 or Los Angeles in 2028, categories of longboarding, body-boarding or stand-up paddleboards (SUP) could be added.

The top 10-ranked men and eight highest-ranked women on the 2019 WSL tour will be among those qualifying for the Tokyo Games. Slater, who would be 48 when the Tokyo Games are held, has said he hopes to represent the United States.