Tokyo Olympics 2020: Olympic flame passed to Fukushima during low-key ceremony, will be on display in city till 30 April

Tokyo 2020 organisers left the Olympic flame in the hands of Fukushima Prefecture on Wednesday where it will be on display in a lantern for the next month after the Games were postponed for a year due to the coronavirus outbreak.

The handover took place at a subdued ceremony at the J-Village National Training Centre in Fukushima, which was originally set to be the starting point of the torch relay. 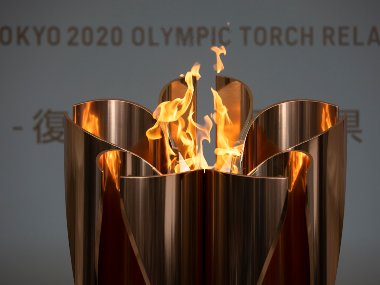 Only Tokyo 2020 COO Yukihiko Nunomura made the trip north from the organising committee.

“This is a (symbol of) hope for the world to celebrate the best of human beings through Tokyo 2020 after we overcome the serious coronavirus,” said Nunomura to start the ceremony.

He then handed the Olympic flame to Makoto Noji from the Fukushima government.

“I strongly believe that the Olympic flame departure from the J-Village next year will be a strong message that we can overcome whatever difficulty,” said Noji.

“(It is a) symbol of hope - after we overcome this coronavirus disease we are now facing, with the people, not only from Japan, but from all over the world.”

The flame will stay on display in the J-Village until 30 April before being moved to Tokyo. Organisers have not yet decided where in the Japanese capital it will be displayed.

The International Olympic Committee and Japanese government succumbed to intense pressure from athletes and sporting bodies around the world last week by agreeing to push back the Games because of the coronavirus pandemic.

The J-Village was chosen as the starting point of the 121-day torch relay, originally due to start on March 26, because it is a symbol of Japan’s reconstruction following the 2011 earthquake and tsunami.

The facility was used as a base to launch recovery efforts along the devastated coastline and has only recently been resurrected to its former glory as a performance centre for Japan’s elite young soccer players.