Lausanne: Three more Russian athletes were banned for life on Friday by the International Olympic Committee (IOC) for doping at the Sochi Winter Games in 2014.

The Oswald Commission, which is investigating allegations from the World Anti-Doping Agency (WADA) of systematic state-sponsored doping by the Russians at the Games they hosted, announced that it had banned two cross-country skiers and a biathlete. 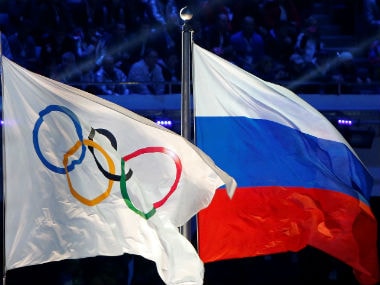 The Russian national flag (R) and the Olympic flag are seen during the closing ceremony for the 2014 Sochi Winter Olympics. Reuters

The only one of the trio to win a medal in Sochi was biathlete Olga Zaitseva who was part of the team that came second in the relay. That medal had already been stripped after the commission's ruling on Olga Vilukhina on Wednesday.

Zaitseva also won golds in the relay in Turin in 2006 and Vancouver four years later and silver in the mass start event in 2010. Zaitseva, who is 39, retired early in 2015.

The two cross-country skiers are Yulia Chekaleva and Anastasia Dotsenko. Chekaleva was in the Russian team that came sixth in the 4x5 kilometre relay. Dotsenko was part of the duo that also finished sixth in the team sprint.

The two results had already been rubbed out after the commission banned Yulia Ivanova, who was on both teams, in November.

The IOC said in a press release that the commission is still investigating 36 possible doping cases using additional findings from the re-analysis of tests and the forensic examination of sample bottles, which WADA said had been manipulated by the Russians.

The statement added that the Oswald Commission planned to complete all the hearings on athletes who were still competing and could qualify for Pyeongchang, before the Games started.