Thank you, Mr Srinivasan, for being so perfectly villainous

With sad eyes and a heavy heart, the cricketing world has recently said goodbye to the last remaining official scraps of the N Srinivasan era.

This cricketing administration behemoth has been judged by the Supreme Court of India and new BCCI President Shashank Manohar as having overstayed his welcome.

Srinivasan is no longer the ICC Chairman.

Is it a case of "ding dong the witch is dead" or the "king is dead, long live the king" ?

For although most fair minded observers have ultimately compared the competence and residual damage of Srinivasan's reign to that of George W Bush, there are always two sides to any argument. 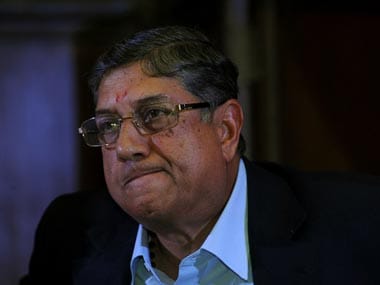 It is true that the Chennai warlord left a trail of blazing destruction in his quest to become cricket's number one man.

His greatest achievements include:

- Being the only cricketing board that runs a press box for a profit, resulting in the BBC covering Test matches in India from London studios.

- Changing South African tour plans late in the game to the chagrin of local businesses, players and supporters, just so as to make a political point against another board's President.

- Cancelling a tour to Zimbabwe to make a point against broadcaster Ten.

- Manipulating schedules to allow for Sachin to play his final Test in Mumbai.

- The buying of the voices of once respectable journalists by putting them on the BCCI payroll.

- The silencing of others by refusing press accreditation, including Australia's Jim Maxwell.

- Threatening other boards with a refusal to play if ex Australia Prime Minister was voted onto the ICC Board.

- The refusal to play Pakistan.

- Chasing social media dissenters by having their accounts closed down.

- Using untrained and conflicted members of staff to hold internal investigations into conflicts and corruption.

- Threatening to withdraw India from international duty should the ICC Big 3 not be established via a change in the constitution.

I could go on. But the point is made.

Srinivasan was a man of action. He could never be accused of sitting on his hands and watching the game drift. Instead, he was an agent of change and managed to achieve enormous upheaval. History will judge whether this upheaval has had a positive affect on the sport. But to have the courage, naivety or perhaps even arrogance to at least tackle big change is a feat.

ICC Chairman elect and current BCCI President Shashank Manohar is treading his own path. He too is a political beast, but one who appears wedded to the left, using words about transparency and accountability to win over the common man.

Srinivasan did not care for such things.

Maybe world cricket administration will now shift back towards the centre, better balancing the opposing forces of needing to make money versus protecting the innocence of the game.

Perhaps the ECB will follow suit and remove Giles Clarke from the ridiculous and unnecessary role of ECB President, ensuring that he cannot become the ICC Chairman?

Whatever way it goes, the legacy of Srinivasan cannot be blindly judged as diabolical. For in a perverse way, without his arrogance, the sport would not have reared up and demanded a new path.

For example, his IPL conflict of interest antics have resulted in new provisions in the BCCI rules ensuring it can't happen again. It has seen independent third party auditing. It has seen the Supreme Court of India get involved.

This only happens when things go too far.

Imagine a situation where Srinivasan didn't act so autocratically but was still achieving poor outcomes for the game. In this scenario, he would still be at the helm, with no trigger to make change.

So thank you Mr Srinivasan for being so perfectly villainous.

For without you, the game's administration would not have had a mandate to change course and right the ship.

We will miss you.

But we also don't want you back anytime soon.