In tennis, one of the most common questions of debate is: Who's the 'Greatest of All-Time' in men's tennis, Federer, Rafael Nadal or Novak Djokovic?

Roger Federer attends a training session ahead of the Laver Cup tennis tournament at the O2 in London. AP

London: Roger Federer is a father of four — two girls who are 13, two boys who are 8 — and so perhaps that is why, as he wraps up his playing career, he thinks about the “GOAT” debate that has engulfed the tennis world the way parents might look at their children.

“People always like to compare. I see it every day with my twins. Without wanting, you compare them. You shouldn’t — ever,” Federer said during an interview with The Associated Press on Wednesday, hours after his farewell news conference at the arena that will host the 20-time Grand Slam champion’s final competition, the Laver Cup.

“Naturally, we do the same in tennis. … I am my own career, my own player, that needed those challenges. They needed a challenger like myself,” he said, leaning back on a couch, having traded in the blue blazer and polo shirt he wore earlier for a post-practice navy pullover, white T-shirt and black jogger pants. “We made each other better. So at the end of the day, we’ll all shake hands and be like, ‘That was awesome.’ Now is somebody going to be happier than the other? I mean, in moments, maybe.”

He called the topic “a good conversation, let’s be honest” and “definitely a fun debate” that “you can endlessly talk about.”

“I always say it’s wonderful to be part of that selective group,” he began, talking about the so-called Big Three rivals, then paused to sigh. 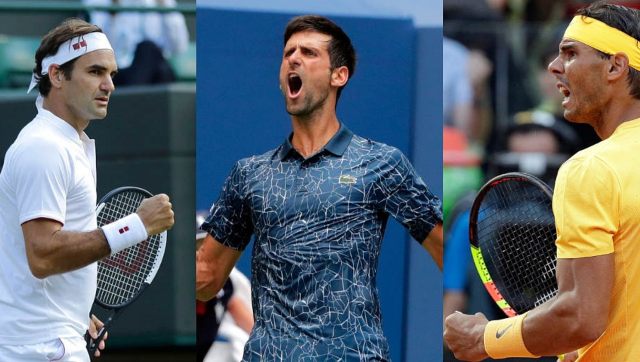 File photo of Roger Federer, Novak Djokovic and Rafael Nadal – who collectively are called the Big 3.

Referring to Nadal, who is 36 and is expected to be Federer’s doubles partner for his final match Friday, and Djokovic, who is 35, Federer said: “What I know is they are truly amazing and greats of the game and forever and will go down as one of the — maybe THE — greatest.”

Federer, who is Swiss, grew up a basketball fan, and brought up the Michael Jordan vs. LeBron James back-and-forth from hoops.

“You always want to play forever… [but] I know everybody has to leave the game.”@rogerfederer explains the ‘bittersweet’ emotions of retirement.#LaverCup pic.twitter.com/5HSpnU0VcW

He is adamant, though, that he will remain connected to tennis. That will include showing up at certain tournaments, he said, “to say farewell or goodbye, because I’ve been a part of those tournaments for 20 years.”

It will include watching on TV, some of the time, and keeping an eye on results, all of the time.

He plans to keep tabs on Nadal, who won the Australian Open and French Open this season, and Djokovic, who won Wimbledon but couldn’t enter the Australian Open or US Open because he isn’t vaccinated against COVID-19 (“It’s been quite strange not seeing Novak in a lot of the draws,” Federer observed).

“At this point, once either they surpassed you, or you’re not playing anymore, it doesn’t matter how far up they go,” Federer said. “For me, as long as I could be a part of it and control some of it, I cared more.”

When it comes to the pursuit of more Grand Slam titles by Nadal and Djokovic, he said: “I hope they go and do everything they want. I really hope so. Because it would be great for the game and nice for their fans, for their family. As long as it makes them happy.” 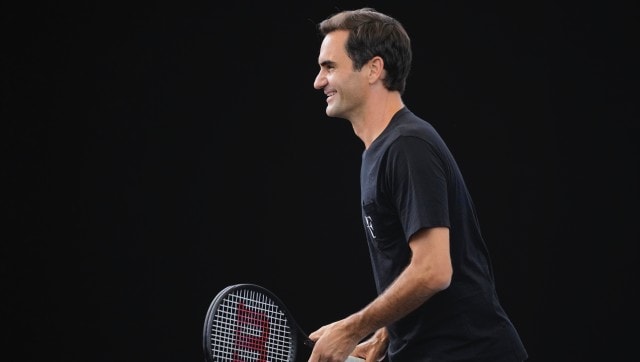 At one point during the nearly half-hour conversation with the AP, Federer mentioned the idea of a player “falling out of love” with the game.

What did he mean by that?

Essentially: It’s not possible to always love every minute of every facet of the life of a pro tennis player.

“You go through phases. As a kid, you have this vision of the tour as this fantastic place: ‘It’s the coolest thing. I can share the locker room with the guys. I walk out to stadiums, there’s fans screaming my name. I can sign autographs, take pictures. On top of the world.’ But then at some point, comes a time, you’re like: ‘I didn’t read the small print, you know?’ Where it said: ‘And, oh, by the way, you need to do it in another language, and we need one more promo shot and you need to travel now and miss a plane and wait for hours and hours in rain delays.’ We knew it was probably going to happen, but was it going to be this intense? This is the part a lot of people don’t know about — what the athletes have to go through at that level,” Federer said.

Closing this chapter with his teammates by his side 🤜🤛@rogerfederer | #RForever pic.twitter.com/bt5DtiYgg3

“Not looking for any ‘Aw, you poor guys.’ We’re doing well. We’re making loads of money and we have the chance to entertain millions of people. But I’m just saying, sometimes you have to second-guess yourself. Question yourself. Like, ‘Am I truly enjoying it like I’m supposed to?’ Because it’s a dream come true,” he continued. “And here you are, living the dream, yet it doesn’t feel so special anymore, because now it’s gotten normal. ‘Normal’ can be dangerous. ‘Normal’ can be no good, you know?”

That, Federer explained, is when the trick is to make things exciting for yourself — maybe “you fake it” or maybe “you have people around you that help you.”

He gave credit to the various coaches and other members of his team through the years for helping push him.

“People see me on the court and they’re like,” he said, then lowered his voice to a whisper, “‘Oh, my God! He’s so gifted! Like, he can do it all by himself!'”

That, Federer said, is nonsense.

“We need inspiration. We need motivation. We need people to kick our ass and tell you, ‘OK, put on your shoes and go for a run. Put on your shoes and let’s go practice. I know you don’t want to do it here. I actually also don’t want to be here, but let’s still do it. And then you can go relax,'” he said. “It’s a challenge. But a good one. And I would do it all over again.”

And then he smiled.