Madrid: The Ymer brothers keep coming through for Sweden in the Davis Cup Finals.

A year after leading the Swedes to a surprising run to the quarterfinals, Elias Ymer and Mikael Ymer got off to a good start and led their nation to victory over Argentina in the opening of the group-stage matches on Tuesday.

Elias Ymer defeated Sebastián Báez 6-4, 3-6, 7-6 (4), while his younger brother Mikael Ymer later comfortably beat No. 17 Diego Schwartzman 6-2, 6-2 in the Group A matches in Bologna. The Argentines scored their lone point with Maximo Gonzalez and Horacio Zeballos defeating Andre Goransson and Elias Ymer 3-6, 6-3, 6-2 in the doubles.

“I’m very happy because we weren’t favourites in this group with teams like Argentina, Croatia and Italy,” Elias Ymer said. “This victory is worth double.”

The Ymer brothers, Sweden’s top-ranked players, had helped Sweden succeed last year despite being one of the lowest-ranked nations in the competition.

The Swedes again weren’t the favourites in the opening tie against Argentina, the 2016 Davis Cup champions. The 24-year-old Mikael Ymer is No. 98 in the world, while the 26-year-old Elias Ymer is ranked 119th.

Three other venues — Valencia in Spain, Hamburg in Germany and Glasgow in Scotland — are hosting group-stage matches ahead of the single-venue quarterfinals that will be played in the southern city of Málaga in November. 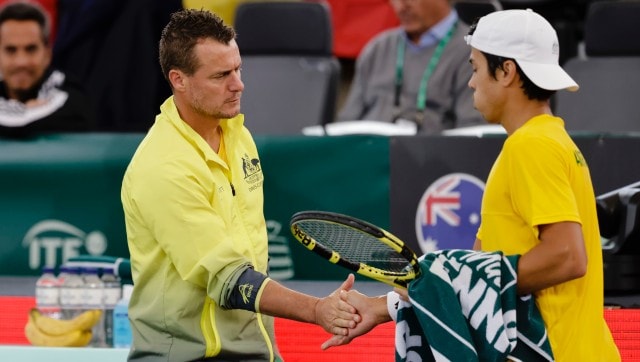 The 22nd-ranked De Minaur had already defeated Goffin the last time the nations met in the Davis Cup Finals three years ago in Madrid. Goffin had won 26 of his 30 singles matches in the Davis Cup entering this year’s edition of the competition.

Kubler, ranked No. 97, earned his victory in his Davis Cup debut for the team captained by Lleyton Hewitt. The 29-year-old Kubler is in the top 100 for the first time since 2018.

Australia made it 3-0 after Matthew Ebden and Max Purcell defeated Sander Gille and Joran Vliegen 6-1, 6-3 in the closing doubles match.

Germany and France are the other teams in Group C.

In Group B in Valencia, Canada took a lead against Davis Cup Finals newcomer South Korea after Vasek Pospisil rallied to defeat Hong Seong-Chan 4-6, 6-1, 7-6 (5), but Soonwoo Kwon evened the tie with a 7-6 (5), 6-3 win over Felix Auger-Aliassime. In the deciding doubles, Auger-Aliassime and Pospisil defeated Song Min-Kyu and Jisung Nam 7-5, 5-7, 6-3 to give Canada the point.

The top two teams in each of the four groups will advance to the quarterfinals.

New world No 1 Carlos Alcaraz arrived in Valencia on Tuesday two days after winning the US Open. Spain will debut on Wednesday against Serbia, which won’t count on Novak Djokovic.

The United States will be without Frances Tiafoe, who lost to Alcaraz in the semifinals at the US Open. The Americans will be led by Taylor Fritz in Group D, which also has a Great Britain team led by Andy Murray.

Top-ranked Croatia is in Group A along with an Italian team playing at home and led by Matteo Berrettini and Jannik Sinner, who lost to Alcaraz in the quarterfinals at Flushing Meadows in a five-set thriller.

Russia will not be able to defend its title from last year after being banned from international team competitions because of the nation’s invasion of Ukraine.