Tactics, selections and quality: Why ISL fans should cheer 0-0 between Kerala Blasters and Mumbai City

Kochi: It ended in a 0-0, but Kerala Blasters vs Mumbai City FC was more than just the scoreline. It was about the away team wanting to contain, defend well and hold a deep line, and counter with pacy wingers while the Yellow Army wanted to use pace and power down the flanks to break their opponents. 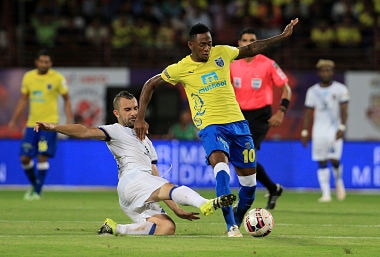 There were no goals but that doesn't mean the match wasn't entertaining. There were 10 combined shots on goal, of which seven were on target. It also saw only 14 fouls and one yellow card given as the referees opted to let the game flow and refused soft free-kicks. The high rate of offsides in other matches wasn't replicated, with forwards getting pulled up by linesmen only four times. As for the passing, some of the moves were high quality as both teams tried to keep the ball on the pitch as much as possible. There were hardly any long balls and the possession stats (49-51) tells you it was a closely fought tie.

Most of all though, it was a tactical battle that shows the Indian Super League's progress this year compared to last season when it was all about adjusting to the weather and travelling and the unexpected abilities of unknown players.

The selections were bold, both Peter Taylor and Nicolas Anelka tried various approaches and combinations in midfield and defence -- all of which makes for enriching competition.

Here are three reasons why football fans should cheer the stalemate:

Tactical battle: Mumbai City assistant coach Oscar Bruzon spoke before the match that the team had concentrated on bettering their 'defensive model' after it fell apart in the second half of their first match against FC Pune City, which they lost 3-1. Kerala Blasters boss Peter Taylor spoke about taking the game to the opposition, using his side's strengths down the wings.

Eventually, both teams went ahead and executed their plans to perfection, with the admittedly 'conservative' Mumbai coming away with a point despite several counter attacks and the Blasters left frustrated with their one-dimensional approach.

Here's what Taylor said about his plans: "Our strategy was to attack down the flanks like last time but some players were tired -- for example, Vineeth was superb in the previous match but looked jaded. We wanted to play just like we did against NorthEast United but four points out of two matches in any season is a good start."

His striker Manandeep Singh, who made his debut for the Blasters, said that Taylor had asked the team to specifically pepper crosses and while the strike-force was left frustrated, they were happy with the point.

Plan Bs and formations: Taylor started with the 3-5-2 system and when it didn't work well, he went for a more conservative 4-4-2, putting Vineeth out wide from his starting No 10 position and shifting Italian Bruno Perone as a defensive midfielder.

"I wanted Vineeth to play further forward so put him behind the strikers (anyway he drifts out left) but that didn't really work so we changed it back to what we did on Tuesday (vs NorthEast) and took him to the left," Taylor explained his change. This also meant two substitutes Ishfaq Ahmed and Sanchez Watt would play on top when brought in -- and both had gilt edged chances to score in the dying minutes.

As for Mumbai, they brought an Indian defender into the mix after starting with a foreign back-four and introduced the strong Frederic Piquionne as lone striker, stifling Kerala in midfield. The Frenchman hit the post from a low cross to almost gift Mumbai a win against the run of play.

Bruzon gave more tactical insight here: "We were conservative today compared to the match against Pune but we will never renounce control of the game -- that is our philosophy. Not just to counter attack. But it's good we can have two approaches."

Bold selections and variety of combinations: "Anybody in the crowd could have scored a hat-trick right? It's always the case of the one who didn't play and could have scored a century," Taylor said when asked why he did not play Watt from the off, given that he has produced some exciting moments in the few minutes he has played in the ISL.

Mumbai dropped two Indians for a all-foreign defence to tighten things up. The change meant they could not play a foreign recruit in attack, so Subhash Singh was chosen as striker -- fast, tricky but lightweight and not good in the air. Nicolas Anelka was not involved at all.

"Piquionne was left out because we wanted four foreigners at the back, four strong midfielders and it makes sense to have him when there is someone to play behind him. Today's selection made more sense technically," Bruzon said when asked whether there were regrets in selection.

At the other end, the Blasters chose Manandeep and Chris Dagnall as partners. Taylor's belief is simple: until he doesn't allow players to play, he will never know how they perform.

"I can't play everyone all the time, it is tiring and players need to be given chances. We have another game in three days time. If some players are always on the bench, you don't know whether they can do well or not. It also means 10 very unhappy players in the dressing room."

All these make one thing clear: ISL is a much more tactical affair this time around and it makes for some fascinating viewing.