He hasn't lost a bout in close to five years and Vijender Singh is determined to keep the record with a world title to boot as he enters the new decade donning multiple hats, including the one of an active politician "with strong opinions." 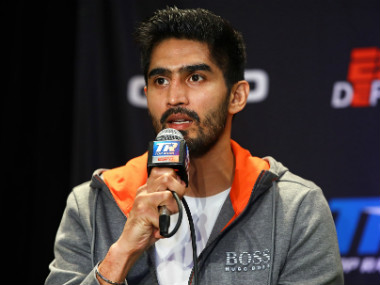 The 34-year-old trailblazing boxer, who delivered India's first Olympic and men's world championship medals in boxing back in 2008 and 2009, has logged an enviable 12-0 record in the professional circuit, which he entered in 2015.

"All the talk with my promoters is focussed on the world title. In all, I expect to compete in three-four fights this year with the world title being the big one. We are trying to ensure that this marquee fight happens in India," Vijender told PTI in an interview.

Vijender is handled by Hall of Famer Bob Arum's Top Rank Promotions in the USA and has Infinity Optimal Solution (IOS) Boxing Promotions to handle him in India. He last fought in November 2019, beating Ghana's former Commonwealth champion Charles Adamu in a lopsided bout.

"I will continue to train with Lee Beard and move to Manchester in the next few weeks to begin my training there. While I am here, I train at a gym in Gurugram," he said.

Beard, who has trained professional stars like Ricky Hatton, has been Vijender's trainer since 2015. Under his tutelage, the Haryana-lad clinched the WBO Asia Pacific and Oriental super middleweight titles.

The only time Vijender tasted defeat in the last five years was when he decided to take the political plunge ahead of the 2019 Lok Sabha elections. He lost the election from South Delhi while contesting on a Congress ticket.

Does he regret the move?

"Not one bit. I fully stand by it and I intend to be an active politician. I have strong opinions on issues and I like to be vocal. Being a politician gives you a platform to be the change," he asserted.

"Kai baar aap seekhte hain, kai baar aap jitate hain (sometimes you learn, other times you win). That's how I would describe my decision to join politics. It is a wonderful way to stay connected with the realities of life. Why should I have regrets just because I lost one election?" he asked.

So, does that mean he will be campaigning during the upcoming Delhi assembly elections in February?

"I don't know for now. If I am asked to campaign, I will. It is up to the party high command. As of now, there hasn't been any communication on this," he answered.

The belief that politics and sport do not mix has been replaced by an intense clamour for athletes' opinions on what are perceived to be the burning issues of the current times.

Vijender said there is nothing wrong if people demand their heroes to voice an opinion in public.

"I believe athletes should speak. At one level, we are also representatives and our voices matter. It shouldn't be that we are saying stuff only when being paid to do so. Views rakhne chahiye, generally (we should present our views).

"It helps the youngsters of this country in finding a voice. For instance, I don't understand why we should spend so much time outraging on what Pakistan is doing. We should move away from that and focus on ourselves. That's how we will progress. That's the way forward, in my opinion," he said.

Speaking of going forward, the strapping six-footer welcomed his second son in May last year and he says he has lost track of time ever since.

"I don't know when the day starts and when it ends. Right now, I am on daddy duty as well. I am a boxer, father, and politician. I hope I am at least decent in all these roles," he laughed.