Rome: Forget the false nine. Traditional No 9’s are back in vogue in Serie A.

From Romelu Lukaku to Ciro Immobile and Andrea Belotti — and even the new-look Cristiano Ronaldo — old-fashioned centre forwards are grabbing the spotlight as the Italian league approaches its midway point this weekend. 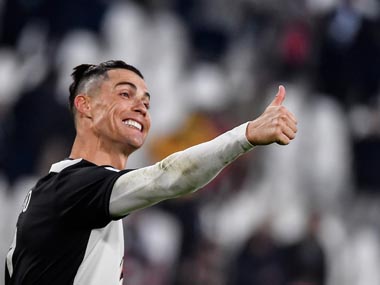 Juventus' Cristiano Ronaldo celebrates after scoring during an Italian Serie A match between Juventus and Cagliari. AP

The last round of matches was a case in point, with a hat trick from Ronaldo and multiple goals from Lukaku, Immobile and Belotti.

Even Napoli, which led the recent movement toward false nines — the use of a more agile midfielder-like player at the centre forward position — has relied more on the physical prowess of Arkadiusz Milik for goals this season than the speedy and elusive Dries Mertens.

Meanwhile, Zlatan Ibrahimovic is only one game into his Serie A return with AC Milan.

Immobile’s 19 goals in 17 matches are a big reason why Lazio is putting together an unexpected run for its first Serie A title in two decades.

The Italy international is tied with Bayern Munich forward Robert Lewandowski at the top of the Golden Shoe standings as the most prolific striker in Europe this season.

While Immobile doesn’t have the same physical stature of many traditional No 9’s, his vertical moves have been in perfect synch with crossing specialists Sergej Milinković-Savić and Luis Alberto.

For Lukaku, it’s been all about his highly productive pairing with Inter Milan teammate Lautaro Martinez. Dubbed “LuLa,” the duo has scored 23 goals in Serie A this season — seven more than all of AC Milan.

The muscular Belotti is a big reason why Torino is in the top half of the standings, setting up a duel with Immobile for the starting centre forward position on Italy’s national team. That’s a position also coveted by Mario Balotelli, who is starting to score consistently again at Brescia.

Since his November slump, Ronaldo has shown more willingness to share Juventus’ attack with Paulo Dybala and Gonzalo Higuain and the results have been more than positive.

In his last five league matches, Ronaldo has scored eight goals, including his first Serie A hat trick against Cagliari and two against Udinese — not bad for a player who will turn 35 next month.

This weekend, Ronaldo will go head-to-head with another classic No 9 in Edin Džeko at Roma.

With Juventus and Inter level at the top of the standings, Lukaku and Martinez will likely need another productive match when it hosts Atalanta, which won both of its previous matches 5-0.