Milan: After blasting 10 goals in their last two games, free-scoring Atalanta will take aim at Serie A leaders Inter Milan on Saturday as coach Gian Piero Gasperini looks for revenge on the club that fired him after five games.

Atalanta, usually found in the lower half of Serie A, have finished fourth, seventh and third in their first three seasons under Gasperini and their success has continued this season. 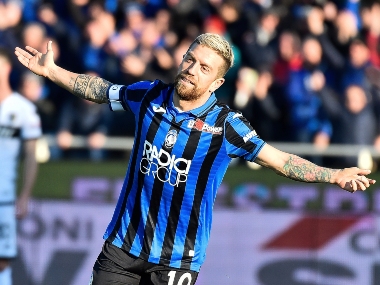 Atalanta's Papu Gómez celebrates after scoring his side's first goal during the Italian Serie A match between Atalanta and Parma. AP

They are Serie A’s leading scorers with 48 goals from 18 games — three times more than AC Milan — which is the highest total achieved by any team at this stage of the season since Fiorentina in 1958/59.

Their 5-0 wins over AC Milan and Parma either side of the Christmas break were the first time any Serie A side has won twice in a row by that scoreline since Inter Milan in 1960.

Atalanta’s domestic form dropped while they were distracted by their first-ever Champions League appearance but, with only the league to concentrate on until February, they have begun to climb again and are back up to fifth, only one point behind AS Roma.

In doing so, they have defied both the pundits and the modern football finance which suggests that mid-sized clubs such as Atalanta can only enjoy one or two good seasons before their squad is broken up and they drop down the table again.

Atalanta, however, have managed to keep their team together and Gasperini said the team had also benefited from a special relationship with the public in Bergamo, the city at the foot of the Alps where they are based.

“There’s fabulous chemistry with these people,” said Gasperini, 61, after the Parma match. “It’s a very nice moment, the players feel it and, in this context, there is an important growth of the team. We need to stay humble but it’s also true that we believe what we are doing.”

“Perfection doesn’t exist, but I’m convinced we can improve in many small ways,” he added.

Hosts Inter, who have not won a major trophy since 2011, have enjoyed a revival under Antonio Conte and lead the table on goal difference from Juventus, who visit fourth-placed AS Roma on Sunday, as the season reaches the halfway point.

Meanwhile, third-placed Lazio, who are six points behind the leading pair, host a Napoli side who have lost two of their first three games under new coach Gennaro Gattuso.

Atalanta’s meetings with Inter invariably stir memories of Gasperini’s unhappy stint at the Milan-based club where he was sacked after only five matches at the start of the 2011-12 season — the only time he has coached one of Italy’s top clubs.

Since then, Gasperini has faced them 13 times — once with Palermo, five times with Genoa and six with Inter. Those meetings have produced five wins for Gasperini’s teams, two draws and five wins for Inter.