Cristiano Ronaldo struck twice as a rampant Real Madrid side, featuring the most expensive strike force ever assembled, powered to a 2-0 win over Sevilla in an all-Spanish UEFA Super Cup on Tuesday.

It was a thoroughly deserved victory before a 33,500 crowd at the Cardiff City Stadium in the traditional curtain-raiser to the European club season.

Carlo Ancelotti's men dominated from start to finish with Ronaldo producing two sublime finishes to beat keeper Beto, his Portugal team mate, after 30 and 49 minutes while Sevilla were restricted to just two chances. 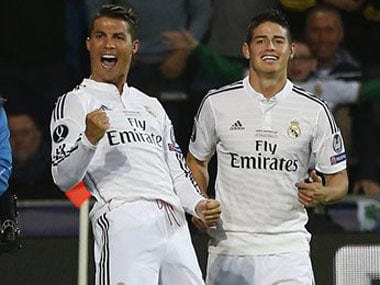 The first opportunity for Sevilla came after 20 minutes when Vitolo forced Iker Casillas to make a block at the near post and the second arrived in the closing stages when Grzegorz Krychowiak prompted an acrobatic save from the experienced keeper.

Real were superior in defence, midfield and attack with Ronaldo showing no sign of the knee injury that blighted his 2014 World Cup campaign in Brazil.

After being presented with the Man of the Match trophy by his former Manchester United manager Alex Ferguson, Ronaldo told reporters: "It's the first official match of the season and I was not sure how I would feel.

"But I felt good and had no problems, I didn't feel any pain.

"We realised it was going to be a hard game but we played well, created more opportunities and played better and with more intensity and we were the worthy winners."

The pair played well in Cardiff with Kroos in a deep midfield role and Rodriguez part of Real's expensive four-man attack which cost in the region of 270 million pounds.

Rodriguez, who cost 63 million pounds from AS Monaco, lined up alongside Cardiff-born hero Gareth Bale, the world's most expensive player at 85 million.

Although the European champions only scored twice, they could easily have had six or seven goals.

"We did our best but Real are a very good team and they were better than us tonight," said Sevilla coach Unai Emery after a typically passionate and animated performance on the touchline.

Counterpart Ancelotti said Real would be even stronger this season than they were last term.

"We played very well especially bearing in mind we haven't had much time to prepare for the game," the Italian added. "We controlled the game and Kroos and James played well.

"(Midfielder) Xabi Alonso was not playing tonight but he will play a very important part this season. We are now more competitive in every position and no one player can play 65 games, it's not possible.

"We might be starting on a very important winning cycle, we have a set of outstanding players and an exceptional squad and we can stay at the highest of heights and compete in all competitions," said Ancelotti.

Ronaldo began the move that led to the first goal inside his own half and finished it by sliding in to convert a deadly accurate crossfield pass from Wales winger Bale.

Benzema and Kroos were involved in the second goal and Ronaldo supplied a thunderous left-foot shot that Beto got a hand to but could not stop.

Bale, playing a club match in Cardiff for the first time in eight years, was cheered every time he touched the ball.

The closest he came to a goal was in the dying minutes when he struck a fierce effort that Beto saved well.