RIP Muhammad Ali: There never has, and never will be, an athlete like him

He was the best. The greatest. The brashest. The boldest. There was nobody like Muhammad Ali when he exploded on the boxing scene to become the world heavyweight champion at 22 with an ego to match. He was calling himself “The Greatest” even before fighting for the title. There has been nobody like him since.

Ali was a true original. He wasn’t the next branch in the evolutionary boxing tree. He was sui generis; his own kind. Unique. He was a big man but moved with the grace of a ballroom dancer in the ring. And he was beautiful. “A splendidly plumed bird who wrote on the wind a singular kind of poetry of the body” as Mark Kram once put in for Sports Illustrated.

And then there was that mouth of his. He would compose poems to describe how he would beat his opponents and in which round. He would insult and needle an opposing fighter, often to the point of distraction. Most famously, there was “float like a butterfly, sting like a bee”. 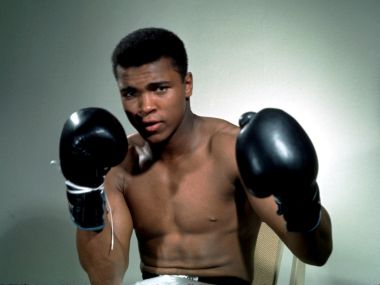 But beneath all his aesthetic delights and that motor mouth, Ali had the kind of courage that few, if any, athletes have ever displayed inside and outside the sporting arena. It was constantly overshadowed by the show Ali put on. Which is why time and again he was underestimated, and time and again he would prove the world wrong, starting with his defeat of Sonny Liston, then considered one of the 'baddest' men alive in America, to win the title for the first time in 1964.

Ali’s biggest win – the one almost nobody expected – came a decade later against the force of nature that was George Foreman in 1974. It was a fight almost everyone picked the big, burly Foreman -- who had a record of 40 wins and no losses, with 37 coming by way of knock out -- to win. Foreman had battered and destroyed Joe Frazier, the former champ, knocking him down six times in two rounds. Frazier had handed Ali his first loss in the ring prior to that defeat. Ali was also 32 and thought to be past his best. Some feared for Ali’s life.

Ali, though, was smarter than people knew. He quickly realised he couldn’t dodge Foreman’s punches all night so sat back on the ropes and absorbed Foreman’s blows on his arms and wrists, deflecting most of them. Foreman landed less than 30 percent of his punches as Ali mocked him and encouraged him to hit harder. It was brilliant strategy. Foreman tired himself out and Ali sent him to the canvas in the eighth round with punishing right cross to the jaw.

"All those writers who said I was washed up. All those people who thought I had nothin' left to offer but my mouth. All them that been against me from the start and waitin' for me to get the biggest beatin' of all times. They thought big, bad George Foreman, the baddest man alive, could do it for them, but they know better now. I done f---ed up a lot of minds,” Ali told the Observer of London.

He wasn’t just a champion boxer either. He was a man of conviction who, unplanned, inserted himself in the biggest issues of the day in 1960s America. He fought the ugliness of racism, converted to Islam and changed his name and refused to be drafted to fight in Vietnam on religious grounds, famously saying “"Man, I ain't got no quarrel with them Viet Cong. No Viet Cong ever called me nigger."

That stance cost him his boxing license and three years in the ring when he was heavyweight champion of the world and in his prime. He became, for a time, a divisive figure in America but it was a cost he was willing to pay for what he believed to be right.

Time would eventually prove to be Ali’s ally in this fight as he transcended the bitterness and the racism to become a worldwide icon – the most recognisable face on the planet - who brought people to together with a message of love, peace and harmony.

“Ali rose far above the world of boxing and came to represent a figure of unyielding principle on issues of human conflict and social justice. In the end, the better angels of conscience became a force far more enduring than the pop and crunch of Ali's hands,” as ESPN.com put it in their obituary.

In an age where the vast majority of sportsmen offer the most bland of statements to the public and do their best to stay away from even the smallest controversies, Ali stands out like a peacock among pigeons.

In later life, Ali developed Parkinson’s disease and it robbed him of the very things that had made him great: his speed and his lyricism. It became difficult to get the words out or float like a butterfly anymore. But it raised Ali to an even greater status as it showed the world a vulnerable side to “The Champ”. Such was his spirit that he found a silver lining even in this debilitating ailment.

"Maybe my Parkinson's is God's way of reminding me what is important," he said. "It slowed me down and caused me to listen rather than talk. Actually, people pay more attention to me now because I don't talk as much."

My personal favourite of all Ali’s achievements is the 'Thriller in Manilla'. It was his third fight against Frazier, who had broken Ali’s jaw in their first fight. Ali had won the rematch. This would be the decider. Thanks to the magic of YouTube, you can watch the fight here.

It is a brutal exhibition of heavyweight boxing. Frazier hated Ali’s denigration of him as an ugly gorilla and an Uncle Tom. He didn’t just want to beat Ali, he wanted to break him. Ali has the better of the early rounds but Frazier grinds his way back into the fight. Mark Kram again: “His old calling card – that sudden evil, his left hook – was working the head of Ali. Two hooks ripped with slaughterhouse finally at Ali’s jaw, causing Imdela Marcos to look down at her feet and the president to wince as if a knife had been stuck in his back.”

Ali would tell his fight doctor "This must be what dyin' is like”.

Somehow he dug deep within himself and refused to die. He began to assert himself again and pound Frazier’s face with rights and lefts. With Frazier almost blind from the swelling around his eyes but still wanting to fight, his trainer Eddie Futch threw in the towel at the start of the 15th round with the immortal words: “Sit down son. It’s all over. No one will ever forget what you did here today.”

Later that same night, Frazier would tell Kram “Man, I hit him with punches that’d bring down the walls of a city. Lawdy, Lawdy, he’s a great champion.”

There is no athlete in this century or the last one that comes close the impact Ali made in and out of the ring. The man may be dead but his legend and legacy will live on forever.