Chitra, who had won a bronze in the recently-concluded Asian Games, crossed the finishing line a surprised fourth place with a time of 4 minute 18.45 seconds in the eight-woman field. She had clocked 4:12.56 in Jakarta. 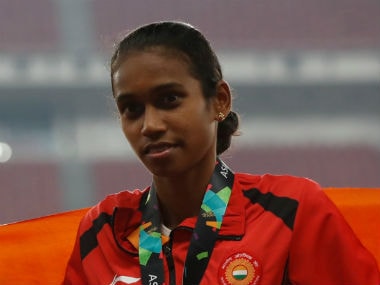 PU Chitra finished fourth in the women's 1500 metres event with a timing of 4 minutes 18.45 seconds. Reuters

Winny Chebet of Kenya emerged as the winner in a time of 4:16.01 while Shelby Houlihan (4:16.36) of United States and Rababe Arafi (4:17.19) of Morocco took the silver and bronze respectively as all the competitors ran well below their best in the season-ending event.

The IAAF Continental Cup was competed in 37 events in men's and women's sections taken together with two athletes from the four regions of Europe, Americas, Africa and Asia-Pacific taking part in each of them. Chitra was representing Asia-Pacific.

In men's 800 metres event, national record holder Johnson clocked 1:48.44 to end at seventh in the race won by Emmanuel Kipkurui Korir of Kenya who ran 1:46.50.

Johnson had clocked 1:46.35 while winning a silver in the Asian Games. He had broken the 42-year-old Sriram Singh's 800 metres record with a time of 1:45.65 during the National Inter-State Championships in June in Guwahati.