Kochi Blue Spikers beat Black Hawks Hyderabad 3-2 to notch up their hat-trick of wins for this season in the Pro Volleyball League on Friday. 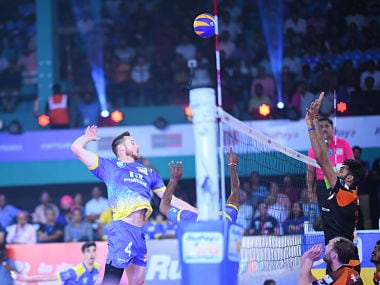 David Lee showed his class for Kochi as he scored 12 points (seven spikes and five blocks). Ashwal Rai was the leading scorer for Hyderabad as he overshadowed his illustrious teammate Carson Clark by scoring 15 points (11 spikes and four blocks).

Rai put up an all-round performance and topped the list of players with the highest number of block points (10 points) from three matches.

Kochi Blue Spikers, who are on top of the league standings after three games, will now take on Calicut Heroes, who are placed second, on Saturday. Just two points separate the two teams going into Saturday's match.