TV ratings, graphs, pie-charts, polished speeches and and highly interactive presentations were the order of the day as speakers and organisers at the Pro Kabaddi media forum in Mumbai attempted to reiterate the league's meteoric rise in the Indian sporting circles. Comparisons with cricket's cash-rich equivalent, the Indian Premier League, were frequent amid indirect indications that kabaddi is ready to challenge cricket as India's No 1 sport.

As far-fetched as some of the claims were, certain statistics cannot be denied. Kabaddi saw the greatest percent rise in investment among all sports in India over the last year, much higher than that of cricket. Although the scales aren't comparable, the pace with which kabaddi has attained at least the status as the No 2 sport in India, is nothing short of remarkable. From being a rural sport only celebrated in certain pockets of the country to sharing significant space on India's sporting canvas, it has been quite an astonishing journey.

No Indian league has ever involved 12 teams from 11 different states, as the PKL is slated to from the upcoming season, and lasts over three full months with matches to be played almost on a daily basis. Kabaddi is no longer confined to mud pits in villages, but can be seen on urban playgrounds and in the compounds of housing complexes in cities.

But is that all that truly encapsulates the odds-defying sport's rise? 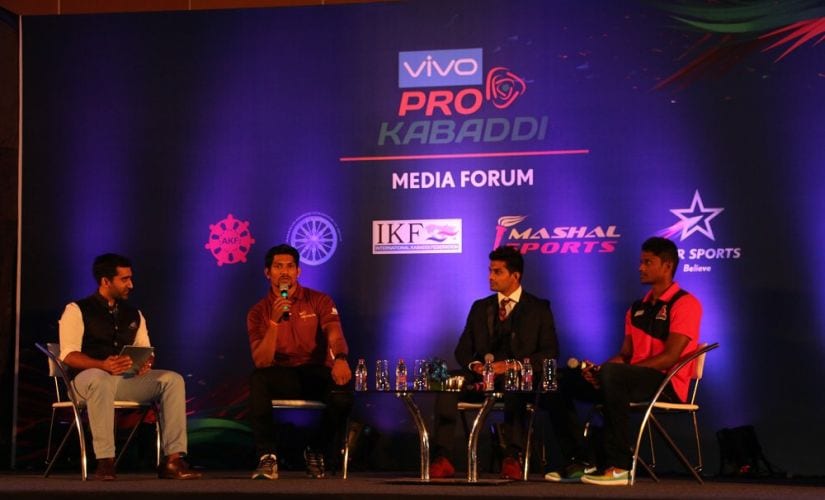 Rishank Devadiga, one of the stars the kabaddi revolution has thrown up, was among the many big names who gave a bit of their mind at the lavish ballroom of the Grand Hyatt on Wednesday. The magnificent setting of the five-star hotel was hardly alien to Devadiga, not only because it was one of the many conferences and events which the raider attended since gaining stardom, but also due to a time in his life when he strove to achieve his kabaddi dream.

"There was a time when I used to work at hotels like these to earn a living. My job was to set up tables, serve at the tea counters for such conferences. So I feel very nice when I come to such events and see what I have achieved," recalled the former U Mumba raider as the entire room burst into applause.

Life had come full circle for Devadiga, who was living a fairytale. His journey so far required him to overcome severe obstacles. It was only his incessant desire to excel in the sport that helped him manage his education while juggling a job and sharpening his kabaddi skills at the same time even as he supported his family financially after the early demise of his father.

The hardships are now a thing of the past for Devadiga, who attracted a sum of Rs 45 lakh in the recently-concluded auction, and his family.

Miles away from Devadiga's struggles in Mumbai, Deepak Niwas Hooda faced a never-ending barrage of adversities. Having lost his mother at the age of four, helping a family which had a married sister, her two kids and an ailing father sustain was a daunting task.

"I had to stop my education to continue the studies of my sisters' children. My father couldn't work as he remained ill for long periods. I desperately needed money for my family. That's when my friend suggested that I start playing kabaddi. At that time, there were lot of jobs for kabaddi players and that's how I began playing the sport," Hooda, who shared the stage with Devadiga at the forum, said.

But sustaining a career in sport is no mean feat. It requires a level of financial support and in its absence, boundless amount of hardwork. Hooda's financial situation made his choice easier, but his life extremely hard. In those times, his day started at 3 am and ended at 11 pm.

"I used to wake up at 3 am and train for three hours. Then I used to teach at a local school till 1 pm. Since my father used to be sick, I also had to work in our farm as it was a source of income. Then I again used to practice for four hours. After few months, I used to travel to a neighbouring village to practice, so I spent some time in travelling. Somehow I arranged money to buy a motorcycle, so that I could travel. By the time I could sleep it used to be 11 pm," revealed Hooda.

Fueled by his dream to don the Indian shirt, Hooda didn't just excel in kabaddi, but also completed his graduation. Today, Hooda is a world champion who played a vital role in India's World Cup campaign and the captain of the Puneri Paltan side, who retained him over many a fancied players, for a contract worth Rs 72.60 lakh. His incredible journey is one among several heroic tales facilitated by the PKL. Deepika Joseph, a Women's Kabaddi Challenge star, didn't have to fight battles of survival like Hooda and Devadiga, but being a female sportsperson — and a kabaddi player at that — was an unwelcome proposition for society. Moreover, kabaddi being a contact sport, injuries come with the package. Joseph's family wasn't too pleased with her sporting endeavours and tried all tricks in the book to stop her from playing.

"My family wasn't too keen on me playing kabaddi. I remember they had locked me in my room once and not given me any food for a two days. But my passion to play was such that I managed to take all that in my stride," Joseph said addressing the media forum.

The perception at her house has now changed as she stands among the top female kabaddi players in the world apart from being a world champion in the sport.

As the day at the forum wore on, more and more astonishing success stories came to light. Tales of supreme sacrifice, and immense hardwork in quest of sporting excellence became the theme of event. Tamil Nadu's Selvamani K, a raider who has made his name for having the best conversion rate in do-or-die raids in PKL, wouldn't have been speaking at the forum without the sacrifices from his family.

"I started playing kabaddi when I was in the 9th grade, but it wasn't easy for me to pursue a career in the sport due to the condition in the family. My brother gave up his education so that I could chase my dreams. That was a very big sacrifice and without it, I would never have managed to play for Tamil Nadu and eventually in the PKL," the 25-year-old Jaipur Pink Panthers raider said.

PKL's decision to go for an expanded league showcases the sport and its practitioners' desire to grow and grow exponentially.

"The one thing about the PKL that has appealed to me is the proximity between the league organisers, the federation and the broadcaster. It's incredible to see how closely Star India is involved in the league and in the sport. It makes a world of difference. Usually when it comes to leagues, there is water between the organisers, the federation and the broadcaster. But here everyone is on the same page and have a sort of can-do attitude that makes them achieve big things. With a new league, the sport would certainly have developed, but it's because of the broadcaster's interest that things have progressed at an incredible pace," Nic Coward, former Premier League General Secretary, who now advises the PKL in matters of player policy told Firstpost.

Going forward into a new and challenging period for the league and sport, the parties involved could do well to draw inspiration from its stars who have battled great odds to script their dreams. Maybe it can help them propel kabaddi to great heights and one day make kabaddi give cricket a run for its money without having to throw complicated numbers or make exaggerated claims.