London: West Ham on Thursday issued lifetime bans to five fans who invaded the pitch during their Premier League match against Burnley earlier this month. 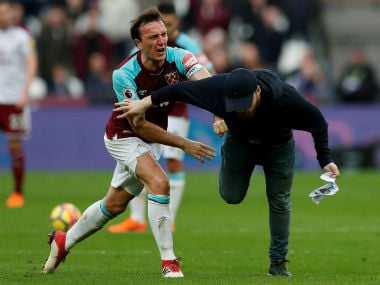 West Ham United's Mark Noble clashes with a fan who invaded the pitch in a match against Burnley. Reuters

Several supporters have also been banned for life for throwing coins or objects "with intent to injure or harm" during a chaotic match at the London Stadium.

The match, on 10 March, was marred by a series of pitch invasions and widespread supporter unrest, with club director Trevor Brooking confirming that co-owner David Sullivan was struck by a coin towards the end of the game.

West Ham captain Mark Noble grappled one fan to the floor, while Burnley players and staff allowed frightened young supporters to take shelter on their bench.

"Lifetime bans from all West Ham matches, both home and away, have today been issued to five individuals who crossed safety barriers to enter the field of play," said a club statement.

"A number of individuals have also been banned for life for violently throwing coins or objects with intent to injure or harm on the bridge directly in front of the directors' box," it added.

The club said that a number of additional incidents were still being investigated and they expected to issue further bans before the next home match against Southampton on 31 March.

Brooking, speaking on BBC radio the day after the Burnley match, said it would be tough for the Premier League strugglers to avoid relegation unless the atmosphere in the stadium changed.