London: Tottenham Hotspur midfielder Dele Alli said he bears no ill will towards Raheem Sterling after being on the receiving end of a bruising tackle from the Manchester City forward during Spurs’ 2-0 win over the Premier League champions on Sunday. 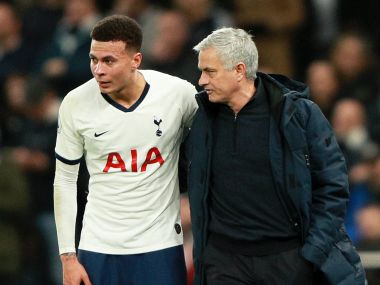 Sterling’s attempt to win the ball saw him step on Alli’s ankle but the Video Assistant Referee (VAR) did not deem the challenge worthy of a red card, angering Spurs boss Jose Mourinho who was adamant the England man should have been sent off.

Alli carried on playing before he was substituted in the 70th minute and Spurs, who play an FA Cup fourth round replay against Southampton on Wednesday, are yet to provide an update on the severity of his injury.

“We were speaking about it at halftime and we are good friends,” Alli told reporters. “I know what sort of player Raheem is and he would never intentionally try to hurt someone.

“There are no hard feelings. He is a fantastic player and we move on.”

The tackle was similar to last month’s incident where Arsenal striker Pierre-Emerick Aubameyang was sent off on VAR review and banned for three games when his mistimed tackle nearly injured Crystal Palace’s Max Meyer.

“It is obviously for the referee and VAR to make the decision. They didn’t give the red card.”

The result moved Spurs up to fifth in the Premier League standings — four points behind Chelsea and a top four spot — while second-placed City are now 22 points behind league leaders Liverpool.