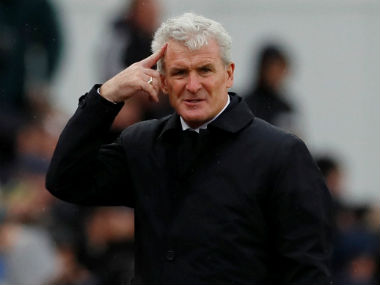 Southampton appointed Hughes on Wednesday as a replacement for Argentine Mauricio Pellegrino, who was sacked as manager earlier this week with the south-coast club fourth from bottom in the standings, a point and a place above the drop zone.

“The situation we are in is not a great one and we don’t need a manager coming in who doesn’t know the players, doesn’t know the league. So Mark would seem to be with the club’s way of thinking,” Le Tissier, who scored 209 goals for Southampton during his 16 years at the club, told Sky Sports.

Hughes, who spent two seasons at Southampton late in his playing career, was sacked by relegation-threatened Stoke City in January after an FA Cup third round defeat by League Two (fourth tier) Coventry City.

The former striker had previously guided the Potters to three successive top-10 finishes from the 2013-04 campaign.

“He obviously did not have a great season at Stoke this year but as far as I can remember I think it was the first time he had a team really struggling against relegation,” Le Tissier added of the former Manchester City and Blackburn manager.

“He’s managed some big teams. He has a wealth of experience of the game... but I’ll keep my fingers crossed he can keep us up this season first and foremost, then get us to kick on again next season.”