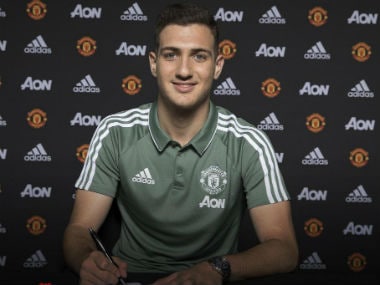 The defender joined Porto's academy in 2008 and represented the club at various age levels before making his senior debut in a Portuguese Cup game in October last year.

Dalot has been described as "a modern full-back, with an appetite for attack" on Porto's website. Dalot is a right-back, who loves to get forward often, bombing forward down the flank to join in attacks. The versatile full-back can also be deployed on the opposite flank. He was also used further forward in midfield at the junior level.

Dalot became a regular in the U17 side and played a key role in their victory at the European Championship in 2016.

He started three of Portugal's first four games at the Euros and went on to score a goal in a 2-0 semi-final win over the Netherlands.

Dalot scored the opener in the final against Spain, as Portugal lifted the trophy after winning 6-5 on penalties.

"Diogo is an extremely talented young defender with all the qualities to quickly become a great player for this club. He has all the attributes that a full-back needs— physicality, tactical intelligence and technical quality, combined with a Porto Academy mentality which prepares players for the maturity they need at the professional level," said United manager Jose Mourinho.

"In his age group, he is the best full-back in Europe and we all believe he has a bright future ahead of him at Manchester United."

His arrival at Old Trafford surely poses a threat to ageing Anotino Valencia and Ashley Young. Mourinho wants his compatriot to make an instant impact in England as Matteo Darmian looks to leave the club after three years.