Carragher told Sky Sports' 'The Debate' programme that the world's most expensive defender "needs to lose a bit of weight". 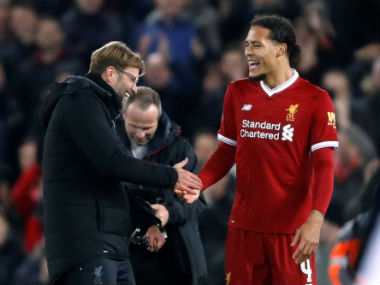 "I am sure Jamie needs to lose a little bit of weight but for Virgil, it is not the case," Klopp told a press conference on Friday.

"He is a big and tall player, that is how it is. We have the best nutrition department and no-one came to me and said we need to work with him."

Van Dijk, who joined Liverpool for £75 million in the January transfer window looks set to return to Klopp's starting line-up for a crucial clash with Tottenham Hotspur in the battle to secure a top-four finish on Sunday after being rested for Tuesday's routine 3-0 win at Huddersfield.

Liverpool, in third, currently hold a two-point lead over fifth-placed Spurs and are looking to avenge their 4-1 defeat at Wembley back in October.

Van Dijk is likely to replace Dejan Lovren, who was substituted after 31 minutes at Wembley having endured a torrid time against Harry Kane.

And Klopp defended the Dutch defender's start to life at Liverpool despite shock defeats to Swansea and West Brom in his two outings since scoring a Merseyside derby winner against Everton on debut.

"It is just exactly as I expected it would be: a few ups and downs," added Klopp.

"We will see Virgil van Dijk at his best after the summer but we don't have the time to wait until then and why should we? He can bring in a lot of things already.

"It is quite difficult because our defending style — and I know how this sounds — is different to Southampton or to Holland so that's why it makes so much sense you get used to it."