Liverpool manager Juergen Klopp hopes to instill defensive discipline in his side ahead of the upcoming Premier League season, saying his side must stop conceding sloppy goals with collective work at the back.

Klopp's attacking approach produced 78 goals for Liverpool in the league last season but they conceded 42 times, more than four of their top six rivals. 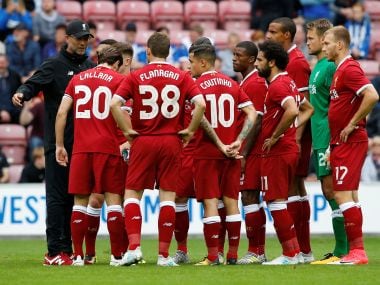 Liverpool manager Juergen Klopp speaks to his players during the pre-season friendly against Wigan Athletic. Reuters

"We have to defend different situations better and not to think about how we could make the other teams crazy with all the qualities we have," Klopp told the club website.

"With the quality and skills of the boys, you immediately have different options offensively — but to be organised is the main thing.

"Otherwise you have no chance — you will have how we felt a few times, you can have 80 per cent possession but in the end if they have one situation then 1-0."

Klopp was also disappointed with the team's set-piece defending and has urged his players to turn things around during their pre-season preparations.

"I don't want to open the case of set-pieces again because it was not set-pieces. It was second balls after set-pieces, after throw-ins and things like this," the 50-year-old German manager said.

"We are all sick of talking about it. We defend well but in these moments we have to come absolutely in the right mood. That's the main target."

Liverpool begin their league campaign with a trip to Watford on 12 August.