Premier League: Duncan Ferguson to remain in charge of Everton for Arsenal clash at Goodison

Everton interim manager Duncan Ferguson will continue to be in charge of the team for Saturday’s home match against Arsenal, the Premier League club have said. 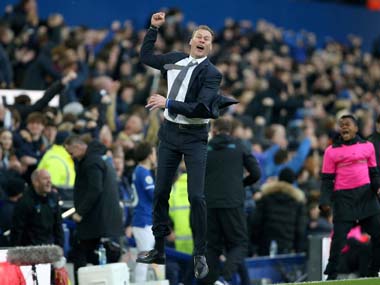 The former Everton striker has guided the side to a 3-1 home win over Chelsea and a 1-1 draw at Manchester United in the league following the sacking of Portuguese Marco Silva earlier this month.

The 47-year-old Scot suffered the first defeat of his temporary stint in Wednesday’s League Cup quarter-final as Everton were beaten by Leicester City on penalties.

While British media have reported that Italian Carlo Ancelotti was set to take over at Goodison Park, Everton confirmed in a statement on Thursday Ferguson would be at the helm for at least another game.

Everton dropped into the relegation zone before Silva’s dismissal but have climbed to safety in 16th place with 18 points, three points above the drop zone.